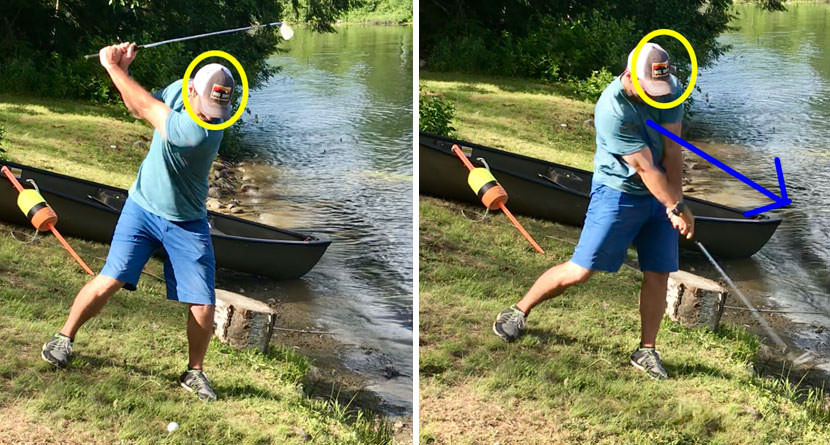 Get Better From Downhill Lies

This week our lesson tee feature comes thanks to an SxS and Swing-U user.  This particular student had been having difficulty playing from downhill lies.  We began working on his upper body motion, lower body stability, and setup tweaks. By America’s birthday, he decided to update me on his progress.

Let’s take a look at what our student, Zack, does correctly when hitting a mid-iron shot from a severe downhill lie. The ball is played forward of center, and depending on the severity of the slope, as far forward as a fairway wood.

Similar to any lie that varies from a standard flat lie, we need to match our body lines with the slope. Zack does a great job getting his shoulders and hips to match the angle of the ground.

Using added knee flex keeps the body stable but also facilitates in positioning. Added flex to the lead knee drops the lead shoulder and hip creating the slant in lateral posture. Your alignment will depend on the target, but the shot is best played when focusing on contact and distance rather than working the ball, so I suggest your alignment to be square while playing this shot. At the top of the backswing, body weight is still positioned mostly on the lead side. This helps keep the body lines that were established at address at the correct angle, ensuring Zack swings along the slope. If this is not the case, most golfers will lift as they swing and the result could be a thin and weak shot to the right.

Notice that his head stays very quiet as there is very little lateral motion in this swing. We worked with Zack on maintaining his levels throughout swings from uneven lies. Here we see he did a great job as evidenced by the clubhead traveling below his feet along the slope, which is only possible if he maintains the angle of his shoulders and hips.

Furthermore, a great indication that you are executing this shot correctly is when your chest points downward as you finish the swing. The blue arrow indicates Zack is in a great impact position and is leading into a solid finish.

Finally, take note that his head did not move out of the circle. Even with the force of the slope pulling him towards the target as he swings, the solid and balanced setup allowed him to pivot properly and keep his weight centered on his lead side.

Take advantage of the next downhill approach shot you have and swing confidently.

Note: A downhill lie will most likely deloft the club. Adjust a half or full club to counter the change in loft caused by the lie. This will keep your distance control consistent with a normal shot.