Birdies were flying down the stretch of the QBE Shootout on Sunday, but it was a big bird that clinched the victory for the duo of Patton Kizzire and Brian Harman.

At 28-under par through 70 holes, the pair of Sea Island residents knew they needed to pick up at least one shot to tie the team of Graeme McDowell and Emiliano Grillo and likely two shots to win. Playing best ball on Sunday, Kizzire came through in the clutch, eagling the par-5 17th that put the team in perfect position to win coming down the last hole needing only a par.

Playing off a cart path and hardpan are very similar. The advantage of a lie that finds the hardpan or compact earth is that you can swing aggressively into the back of the ball and strike down; that would not be so pleasant off of a paved path.

Although relief is usually not given off of paths that are natural, if you are given the option we would recommend playing it as it lies, as Kizzire did.

The first reason to play from the lie is the uniform surface it presents. Taking relief will likely place you in the rough or a less-than-desirable area of grass. The second reason is the control and amount of spin you can impart from a tight playing surface.

Let’s take a look at how Kizzire played his shot, picking up some points you can apply next time you are playing from a similar lie.

In watching Kizzire play from a dirt and sand-based lie, one aspect that stands out is a quiet lower body and shorter backswing. These factors ensure he keeps his balance and footing. Shifting pressure to the right or becoming very active by driving the lower body during the shot would likely result in the back foot slipping and ultimately a change in swing plane along with the quality of contact.

To counter these possible problems, take a wider-than-normal stance and shift your body weight slightly to the lead side (left leg for a right-handed golfer). A wider and forward biased stance builds stability and sets your swing path to be descending, with a trapping motion that pinches the ball and sandy surface at the same time. A proper impact will produce a slight divot in the hardpan in front of the ball.

Finally, swing to and emphasize a long full finish. Even though the backswing was shorter, swing and rotate completely so the club does not travel too deeply into the ground. Rotating with the hips and upper body allows you to swing aggressively downward and still have a wide enough bottom of the swing arc.

This is how pros and good amateurs can take long irons and woods that need to have an overall shallow and sweeping attack profile and add an element of steepness and attack down on the ball.

The result is a perfectly-struck, high-launched, and spinning approach shot… not to mention an eagle to secure the win 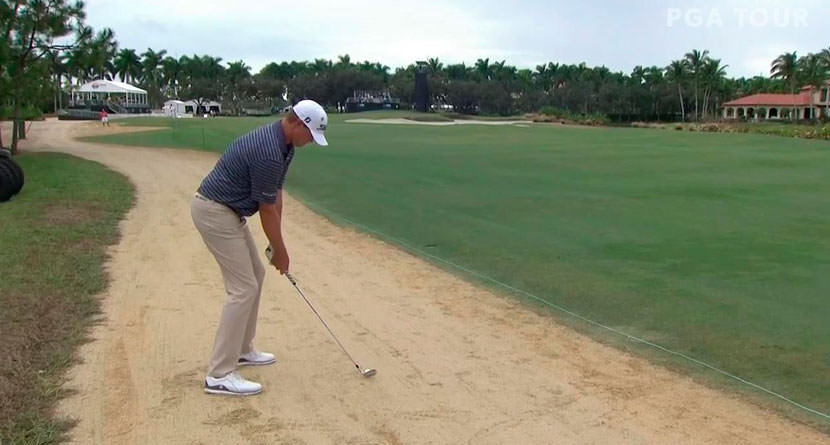