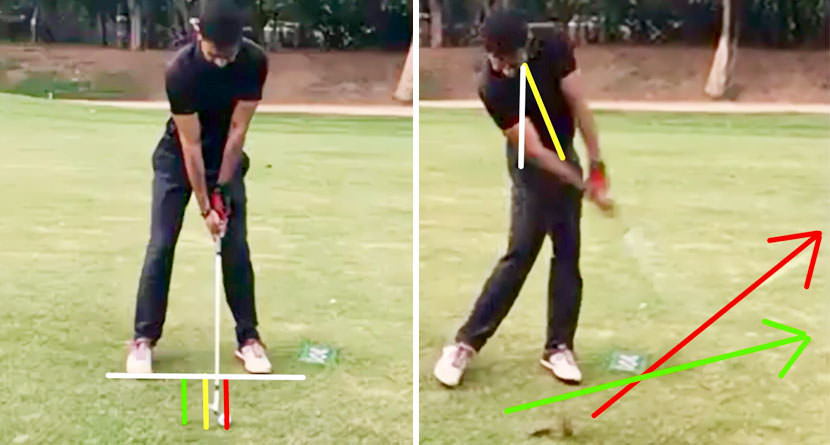 At Swing-U, we have students ask all the time about how they can improve contact and trajectory; some even ask why they seem to hit so many clubs the same distance. They are shocked when they realize the answer has less to do with any swing changes and more so the way they address the ball.

You can improve your contact and become more consistent by solidifying a proper ball position. Improper ball position can add or take away loft at impact, resulting in carry distances getting bunched. The player will not see the yardage spread between lofts that is needed to make all the clubs in the bag worth having.

Let’s take a look at a student that was hitting his wedges to high and short, recently losing 10 yards on a sand wedge, which is a big deal. His spin and control were affected by poor ball position. The red, yellow, and green lines represent poor, acceptable and optimal ball positions, respectively. Since the student is hitting his wedge and noticing highe-than-normal flight with less spin, we can automatically look to setup and start searching for clues as to why the ball is behaving differently with no report of a different feeling in the players swing.

Having the ball position near where a long iron or fairway wood should be played will determine the angle of attack and spin rates.

With a wedge, it is important the ball position is back of center.  First, since the wedge is a shorter club the low point of the swing is further back. Second, the angle of attack should be steeper with a full wedge shot, this will ensure ball-first contact and that the ball is forced up the grooves (maximizing spin).

A forward ball position will also have an impact on how the body moves in the swing as well. The white line was the student’s spine angle at address. We can see that at and after impact he needed to pivot away from the target, tilting the spine backward. This adds loft to the club and can also produce a low-spinning or knuckle-ball-like golf shot — the spin rate with a wedge helps us control distance and trajectory. The red arrow is the flight the ball is traveling on with the poor body motion. The green arrow is the optimal trajectory from the correct ball position.

Before you go and try and make swing changes, make sure to double check your ball position. A good rule of thumb is 7-8-irons in the center of your stance, and for every club adjustment, you go up or down move it one ball width.

This will result in a 6-iron being a ball-width ahead of center and a pitching wedge would be two ball-widths behind center. Play around and tweak the position you play different clubs from to find the right scale that works for your swing.