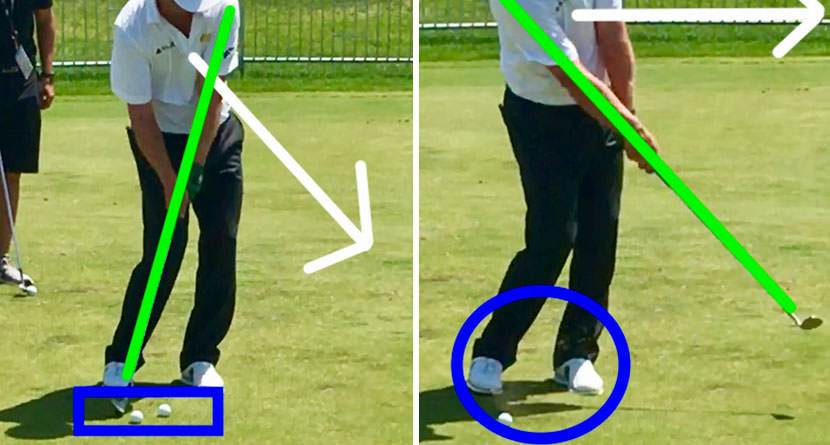 Regardless of the brand, loft or any guaranteed game-improvement enhancements your wedge may have, you still have to hit that touch shot around the green.

It seems obvious, of course, but I see too many of my students spend time on new equipment and zero time practicing the swing and body motion that will allow them to properly execute the shot.

I noticed one of my students recently holding on to the handle of the club tightly, almost fighting the club through impact. He seemed to want as much shaft lean at impact as possible, hands and arms stretched beyond the body towards the target. The results were disastrous — chunks, line-drives, and everything in between. With other golfers in danger as well my student’s psyche, I stepped in.

“Working on my hinge-and-hold along with getting some bite on the ball,” was the explanation I was given.

This is an all too common fault among amateurs. Hinging and holding the handle most likely means the clubhead is not swinging and flowing through impact as it should. A holding motion is okay if the goal is to move the ball a foot or so with a lot of runout, similar to a putt.  But once the desired shot needs to carry, holding only hurts. The player needs to swing, and more importantly, they need to let the clubhead swing.

This motion also limits body turn and energy transfer. Take a look at the images below of PGA Tour pro Charley Hoffman as an example of proper body motion and technique. Notice how the club works — before, into and through the ball — as well as how his body moves. First, notice Charley’s grip. The right hand is in a very weak position. This is done to minimize the impact of hand action, making it very hard to turn over the club, and maximize the ability to get the club shaft on-plane.

The hand being on top of the club will allow the right arm to dominate the downswing and ensures the club does not slip under the swing plane, resulting in poor contact and a shot to the right. Also, the body weight and pressure has been shifted to the lead side with a center ball position. At the completion of the backswing, we notice a very wide arc with less-than-full wrist hinge. This is done to create a natural feeling of letting the club release on the downswing. Normally, on full shots, the player avoids any type of early release of the hinge, also known as casting. Above, moments before impact, the club has already been released. The left arm is fully extended with the club in a straight line and clubface square to the target line. What most will need to work on is the body motion that creates this position.

We see the upper body has already cleared, the chest is pointing in front of the ball with the hips open. One key to achieving this is having a loose and free-flowing tempo. There should not be a lateral slide, but instead feel your rotation — specifically upper body rotation — lead the shot and pull the arms, hands and club down and through. After impact, the right arm now is fully extended. Pay attention to the shaft being inline with right arm, evidence that the club has been fully released. Furthermore, the weight and pressure have been shifted to the lead side, as you can see in the blue circle. This is a great visual to see the relationship between the arm and club action. The backswing and follow-through are almost mirror images. The shot is centered around a rotational point near the left shoulder and there is not a moment where the left arm holds into or after impact.

Practice this motion to have a go-to short game shot that is sure to deliver crisp contact, a trajectory based on true loft and a square clubface with enough spin to keep the ball close to where it lands.

Ditch the hinge and hold and swing the wedge to “release” your scoring abilities.