“Putt when you can.”

We have heard instructors and players alike reference this adage during rounds countless times. Tom Watson did just that on the 5th hole of the Old Course at St. Andrews during the Senior Open Championship’s third round on Saturday. Watson’s second shot into the par-5 left him about 50 feet short of the green and over 100 feet from the hole.

A chip would be hard to stop off the tight lie he had drawn and the undulations both before and on the green would offer too insistent of a bounce to play accurately. So the multiple major winner chose the best option — especially for links golf — he went with the putter.

Now, this wasn’t a normal putt, and we can learn a few things from how he played this shot successfully and walked off the green with an eagle and a share of the lead. Follow these tips and you will get the ball closer with the flatstick and eliminate a tragic error (chunk or skull) with a wedge.

To make sure the putt is the right play, ensure the surface of the fairway leading up to the green is consistent and uniform enough for the ball to travel over the grass and hold its intended line. Oftentimes, amateurs will opt for a putt off the green, however a change in grass growth, sprinkler heads or other oddities knock the ball off-line.

The ball needs to be played in the front of the stance. We do this to place the low point of the stroke behind the ball resulting in the putter meeting the ball with a slightly upward strike. This is key to impart the most amount of topspin on the ball; any downward hit on the ball will cause bouncing and backspin resulting in a putt that can come up well short.

NOTE: I give students a tip to stand a bit taller with the shot. This will free up your arms to swing more than a normal putting stroke and help create the power needed to get the ball to travel a bit farther than the average distance.

This is the best aspect of what Watson showed us. Pay close attention to the rhythm and length of the stroke. Many players take a very long backstroke and have a hard time making solid contact. Tom kept the stroke short enough, but increased the tempo to help build power. He also incorporated a hit with his wrist and hands.

NOTE: A great drill is to try and hit these long putts while looking at the hole. There is no pressure to make such a long putt and you will benefit from judging the proper speed by engaging the target with your eyes the entire shot. 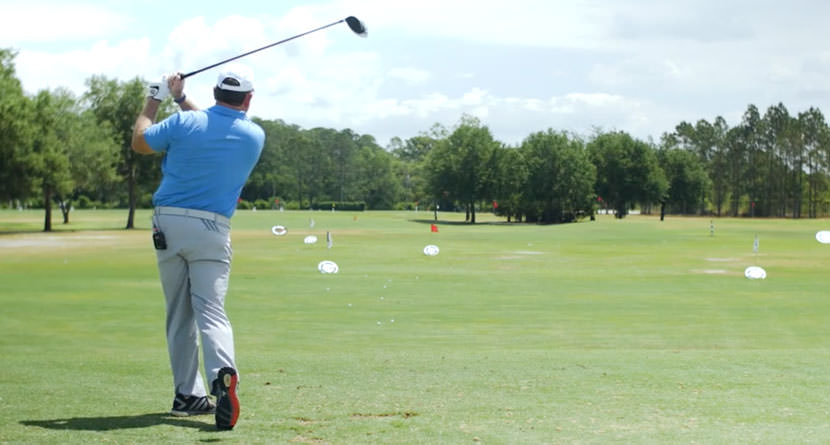 Cheat The Wind With Driver Off The Deck
MORE LESSONS & DRILLS

Cheat The Wind With Driver Off The Deck
MORE LESSONS & DRILLS