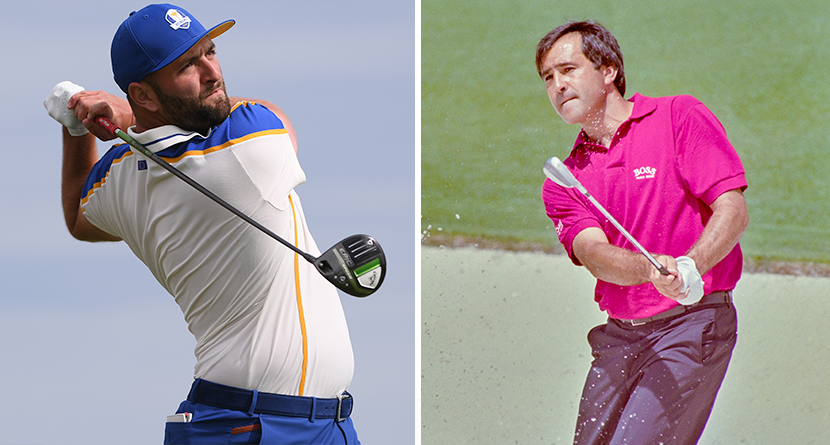 Anybody can dream up future iterations of The Match involving quarterbacks and point guards and various other celebrity hackers who — let’s face it — need to be carried by their playing partners. Where’s the fun in that?

Friday’s Brooks Koepka vs. Bryson DeChambeau grudge match represents a return to the event’s mano-a-mano roots. Tiger vs. Phil was a showdown 20 years in the making, and it paid homage to the star power on display in Shell’s Wonderful World of Golf. Inserting the likes of Tom Brady and Peyton Manning may have added some intrigue, but it undoubtedly watered down the golf.

So as we get ready to watch two in-their-prime studs with a genuine disdain for one another settle the score on a glitzy stage, we thought we’d take a minute to dream big. What are the most dramatic matchups history couldn’t deliver but a time machine would? Which contemporary greats could go toe-to-toe with their legendary counterparts and vice versa?

Let’s fire up Doc Brown’s DeLorean and find out:

A quick note about the reality-bending rules at play here: we’re journeying across time and space to pluck all-time greats like Jack Nicklaus from the period in which he was at the peak of his powers; we’re not interested in watching an 81-year-old square off with a 45-year-old (miraculous swing videos notwithstanding). In some cases, we’ll even specify eras for the players we’re pitting against each other in these one-off, hypothetical battles.

Now, with all that established, this is an absolute no-brainer. Tiger. The Golden Bear. A combined 33 major championships. Definitively the two best to ever do it, in some order. And that’s what this epic confrontation would accomplish — who gets to claim G.O.A.T. status?

Jon Rahm was superhuman in the Ryder Cup matches at Whistling Straits until he ran into a scorching-hot Scottie Scheffler in Sunday singles, the fatigue of carrying the Euros and not skipping any of the prior sessions apparently catching up to him in a 4-and-3 defeat. Afterward, the current World No. 1 talked about the pride he felt playing alongside Sergio Garcia and what it meant to carry on Seve Ballesteros’ legacy as Spaniards thriving in the pressure-packed environs of the biennial matches.

But would Rahm, who has learned to rein in the fury that once made him a tantrum waiting to happen, be so reverent if he were on the receiving end of Ballesteros’ trademark mind games? This is truly a combustible pairing for golf fans to ponder.

Tiger really has no peers when it comes to the period of sustained brilliance that took his career into a new stratosphere around the turn of the century, collecting 19 wins — including six majors —  from 2000-2002. But McIlroy, once considered a worthy heir to Woods’ throne, came about as close as anyone anointed “the next Tiger” to fulfilling such absurd expectations in the summer of 2014.

Streaky as he’s been since, McIlroy was locked in, winning consecutive major championships (the Open Championship at Royal Liverpool and the PGA Championship at Valhalla) to close out an $8,280,096 million campaign. We may always lament the fact that McIlroy’s ascent coincided with the injury-ravaged latter stages of Woods’ career. But if we could somehow make their primes align, if even for just one 18-hole encounter, it’s safe to assume the bidding over the broadcast rights would make Ted Turner blush.

A sparkling amateur resume. Two major championships in his first eight starts. A reputation for being a cerebral player with an impressive academic background. Sound familiar? Well, if you guessed Bobby Jones, you’d be half right — those credentials also belong to Collin Morikawa, who at the precocious age of 24 is conquering the golf world in ways that are more reminiscent of Jones than Woods.

So whose picture-perfect swing would reign supreme? However it shakes out, we think Morikawa should have to go backward to nullify any equipment advantage — and wouldn’t they both look better in cardigans and knickers than whatever Morikawa was wearing on Sunday at Royal St. George’s?

Nelly Korda vs. any arrogant 5-handicap from your club

OK, so this one is purely about schadenfreude. Just desserts. Comeuppance. By whatever name, you want that guy you know who thinks he can hang with an LPGA Tour pro to just shut up already. And who better to dole out a 9-and-8 beatdown than Nelly Korda, the 23-year-old phenom who captured a gold medal and a major championship in a breakthrough 2021 campaign?