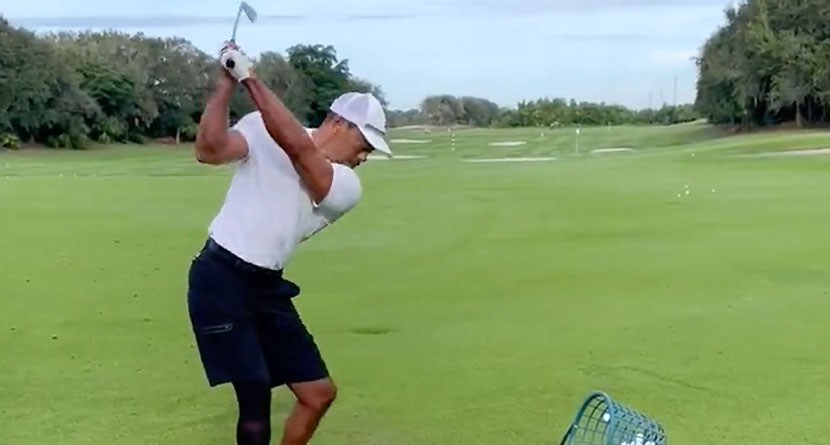 Tiger Woods gave his first official health “update” since May on Sunday morning, posting a single swing video to social media with the caption, “Making progress.”

The three-second video appears to be shot at Medalist Golf Club’s range, not far from Woods’ home in Jupiter, Florida. The solitary shot appears to be one of many based upon the divot pattern and bucket of balls next to Woods.

Woods’ injured right leg was enclosed in a black compression sleeve, which has been the norm in recent weeks as he’s been spotted following his son, Charlie, during a tournament in Florida as well as last week in Los Angeles where Woods was photographed at an area hotel.

The post was very similar to what Woods posted in Oct. 2017.

Aside from a short interview given to Golf Digest in May, updates on Woods’ health has been boiled down to second-hand stories from the likes of Steve Stricker, Rickie Fowler, Rory McIlroy, and most recently, Justin Thomas.

“I’d say I probably go over and see him two or three times a week when I’m home,” Thomas told the No Laying Up podcast. “I go over there more so to let our dogs play and hang out — it wears our pup out. But yeah, he’s doing well, especially all things considered.

“I mean, it’s Groundhog Day. Every day’s the exact same thing for him. But at least he’s able to — pictures were going around of him at Charlie’s tournament, Sam’s soccer tournaments here and there. He’s able to be a dad somewhat again, which is most important.

“I know that he’s going to try (to play competitively again),” Thomas said. “I don’t see him ever playing if he can’t play well. He doesn’t strike me as a guy who’s played at home and he’s shooting a bunch of 75s and 76s and he’s like ‘Okay, I’m gonna give Augusta a try this year.’ That’s not really gonna be him, at least from my understanding, what I know of him.

“He knows that there’s a pretty good chance that (the 2019 Masters) was the last chance he really ever had, before that, of making another run, but at the same time I know how determined he is and I know he’s going to want to at least try to give something again. Obviously, I hope he does. But at the same time, as I said after the accident, as long as he can be a dad and be normal with that again, that’s the number one priority, and the rest of this is a bonus.”

Woods is expected to make his first public appearance in two weeks at the Hero World Challenge, the exhibition in the Bahamas that benefits his foundation and begins Dec. 2.