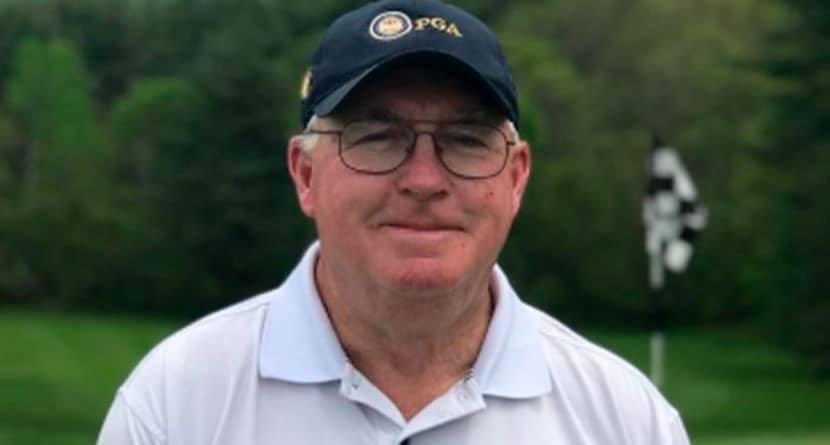 In the second such instance this year, a local PGA pro was killed in a freak accident while on the job.

Tom Sullivan, the head golf pro at Wyantenuck Country Club in Great Barrington, Massachusetts was killed when a tree fell onto his cart as he scoured the golf course for stray golfers as a violent thunderstorm forced him to blow the weather warning horn, according to a statement released by the club.

According to The Worcester Telegram, a neighbor called police after seeing a tree had fallen on a cart. Two officers found Sullivan on the ground near the cart, which was covered by several fallen trees and branches, but they couldn’t revive him, Great Barrington Police Chief William R. Walsh Jr. said.

“He was a great man,” his daughter Sarah said Thursday. “He cared so much about everyone else and how they were doing, how their day was. He wanted to know everything about you and cared so much about everyone. He wanted to make sure that everyone else was having a great day and living in the moment and doing the best they could be doing. He just wanted to make people smile and make everyone’s day better. He was always happy, always smiling, always cracking jokes.”

Sullivan, 71, was only weeks away from his retirement, expected to begin November 1, according to Sullivan’s brother, Paul.

“It was quite a shock,” Paul Sullivan, 70, of Worcester said of his brother’s death. “The silver lining, I think, is that he died on a golf course. Dying on the course is really appropriate if you’ve got to die. And it was without fault. It wasn’t a drunk driver hitting him and it wasn’t him doing anything to precipitate this. It was really an act of God.”

Sullivan had been the head golf professional at Wyantenuck since the Spring of 1999. He was a sitting board member of the Northeast New York (NENY) PGA Association and had held various posts during his involvement. Amongst other awards, Sullivan was voted NENY Golf Professional of the Year in 2017 and elected to the NENY PGA Hall of Fame in 2018, both awards voted on by his peers in the association.

Tom Sullivan, the ultimate salt-of-the-earth head pro at Wyantenuck CC, the course where I learned the game, was tragically taken from us yesterday.

It’s comforting to know others in the @PlayMassGolf #MassGolf community will remember him as I did: https://t.co/MfZEfmKayr pic.twitter.com/XcH9SnTB8z

Earlier this summer, Philmont Country Club head pro Justin Riegel, 38, was killed taking golf carts back indoors when the thunderstorm caused a large tree to uproot and fall on the building, trapping Riegel inside.