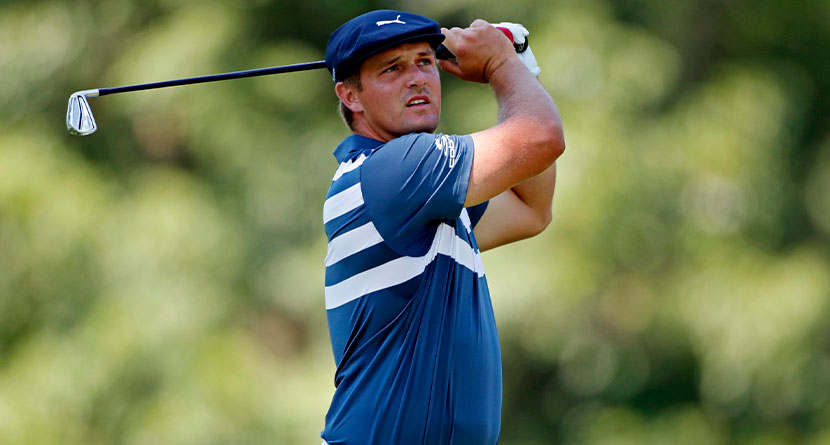 There’s nothing orthodox about Bryson DeChambeau, from his uber-analytical approach to the game to his putting style and of course, his single-length irons.

While DeChambeau’s new-found distance gains have been dominating the news cycle over the past few months, his single-length irons were his original outlier. Every iron in his bag is built to a 7-iron length with differing shaft and head weighting in order to make the pitching wedge indiscriminate by feel from the 4-iron.

The whole idea behind DeChambeau’s single-length irons was as complicated as it was simple — if every club feels and swings the same, you only need one swing for the majority of your golf bag.

To traditionalists — myself included — this theory seemed ridiculous only because it was different than anything I’ve ever known, but after trying out the Cobra King F9 SpeedBack One Length iron set, I have to admit that I’m a believer.

I’m a low single-digit handicap and occasional competitive amateur who dabbles in qualifiers and local competitions. I put my current set of PXG 0311 irons up against Cobra’s F9 SpeedBacks.

I hit 25 balls each with both 5-irons, 7-irons and pitching wedges, alternating between the PXGs and SpeedBacks, on a SkyTrak launch monitor in a controlled environment — my homemade garage simulator — and found came to a few conclusions that I’ll discuss below. 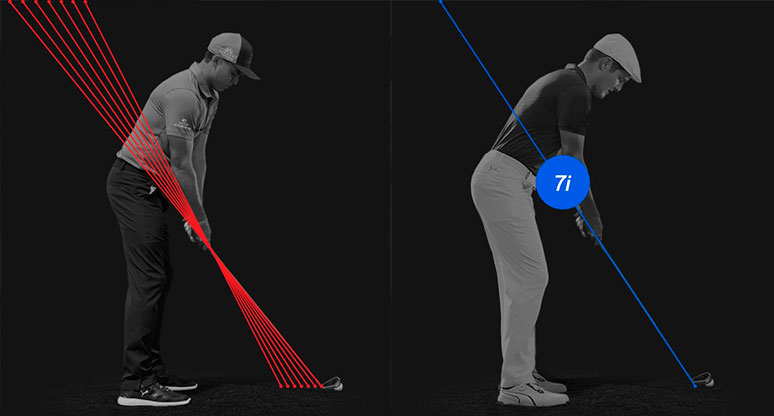 Hitting 150 balls in one session is one thing, but switching back and forth between traditional length clubs and the single-length clubs was honestly a little off-putting. I’ve had my PXGs for a few years now, and it wasn’t long before the clubs that had arrived on my doorstep a few days earlier felt more comfortable in my hands than the clubs I’ve played some 300 rounds of golf with.

There were a few things that immediately jumped out at me. Similar to cutting down the shaft on my driver an inch last year, the shorter Cobra 5-iron gave an instant boost of confidence that I could more routinely find the center of the clubface, and the results bore that out.

As a player who admittedly struggles with consistency with long irons off the fairway (the big right wipely fade is always in the back of my mind), this was a huge plus for me. 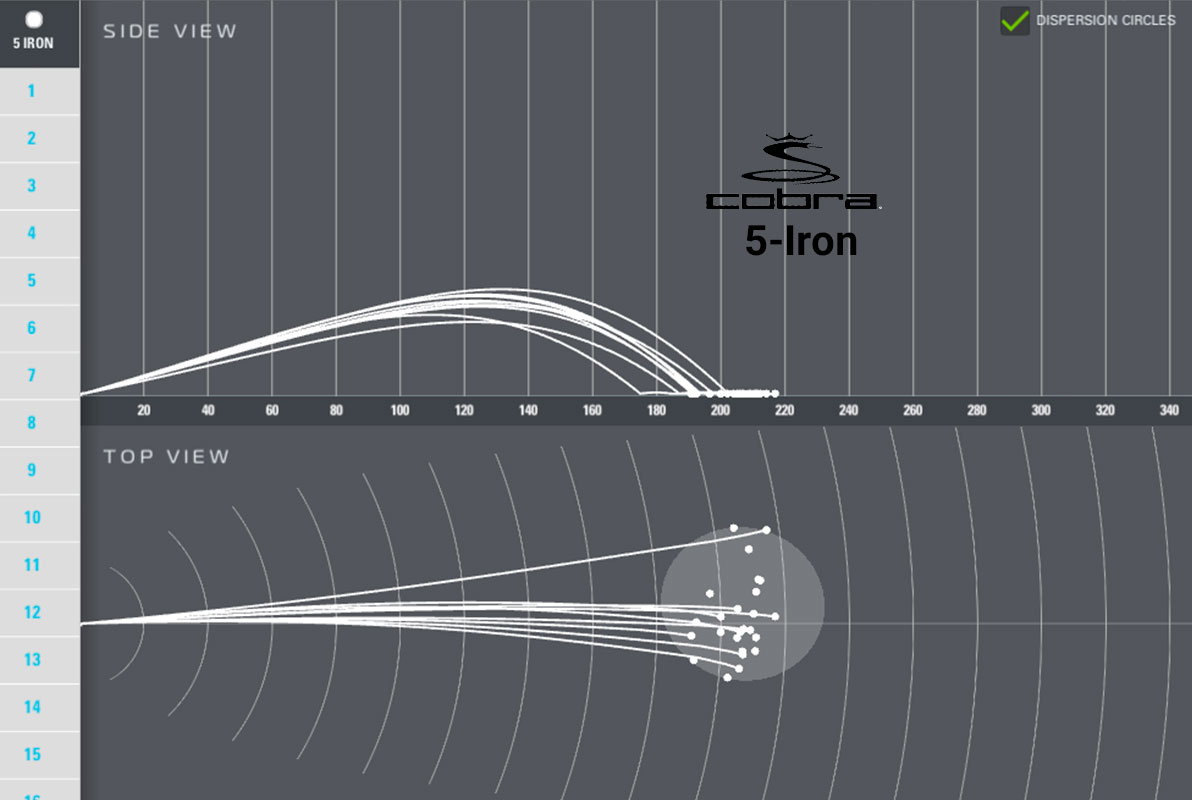 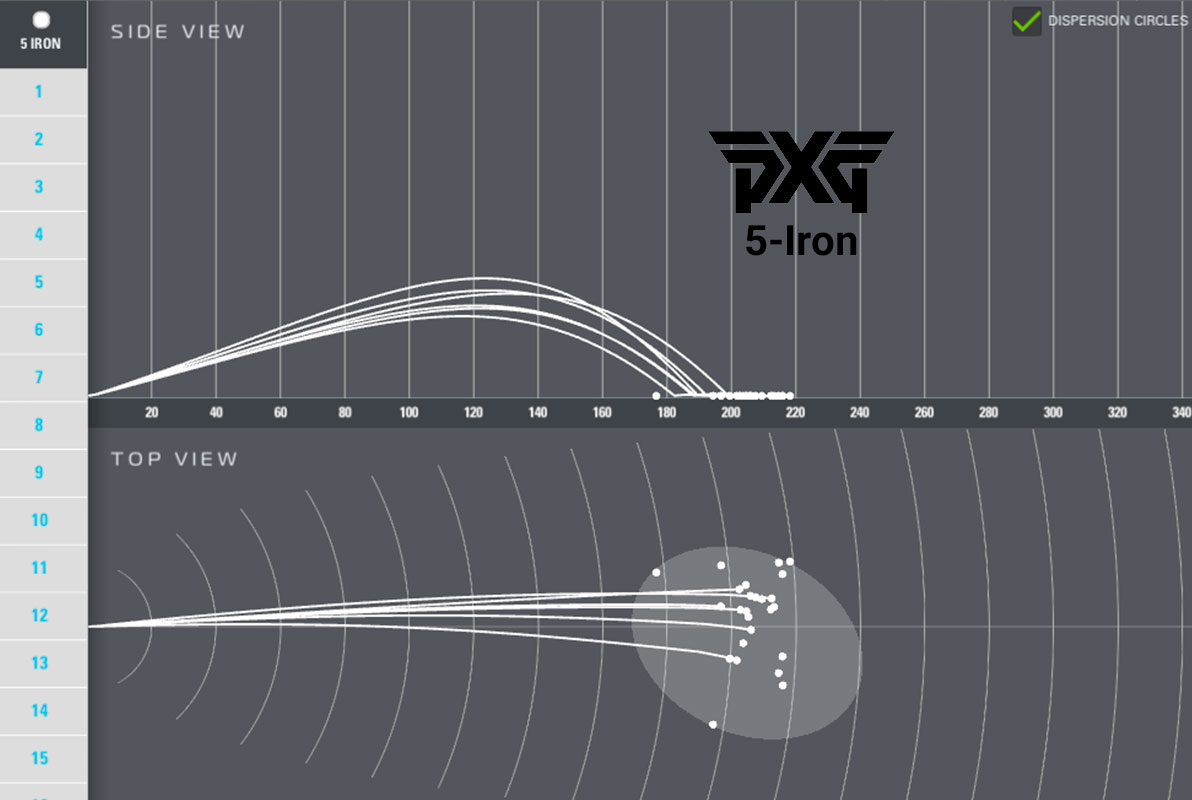 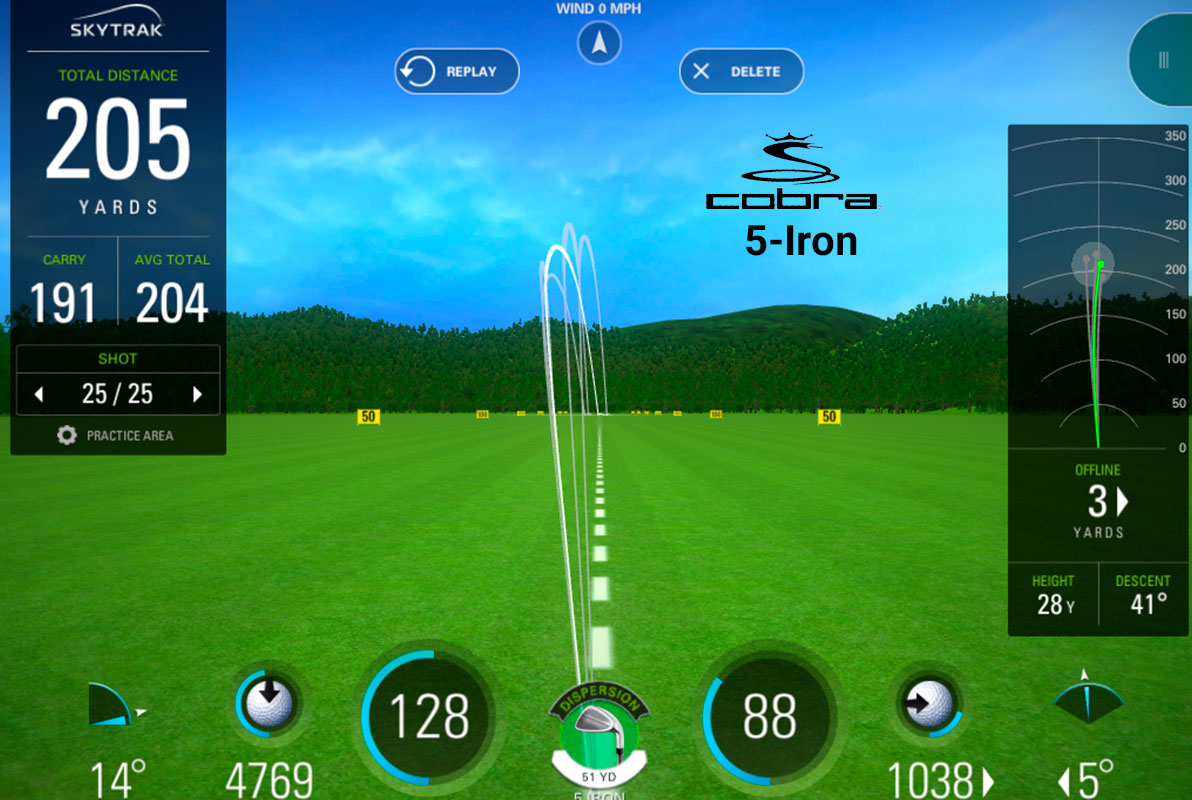 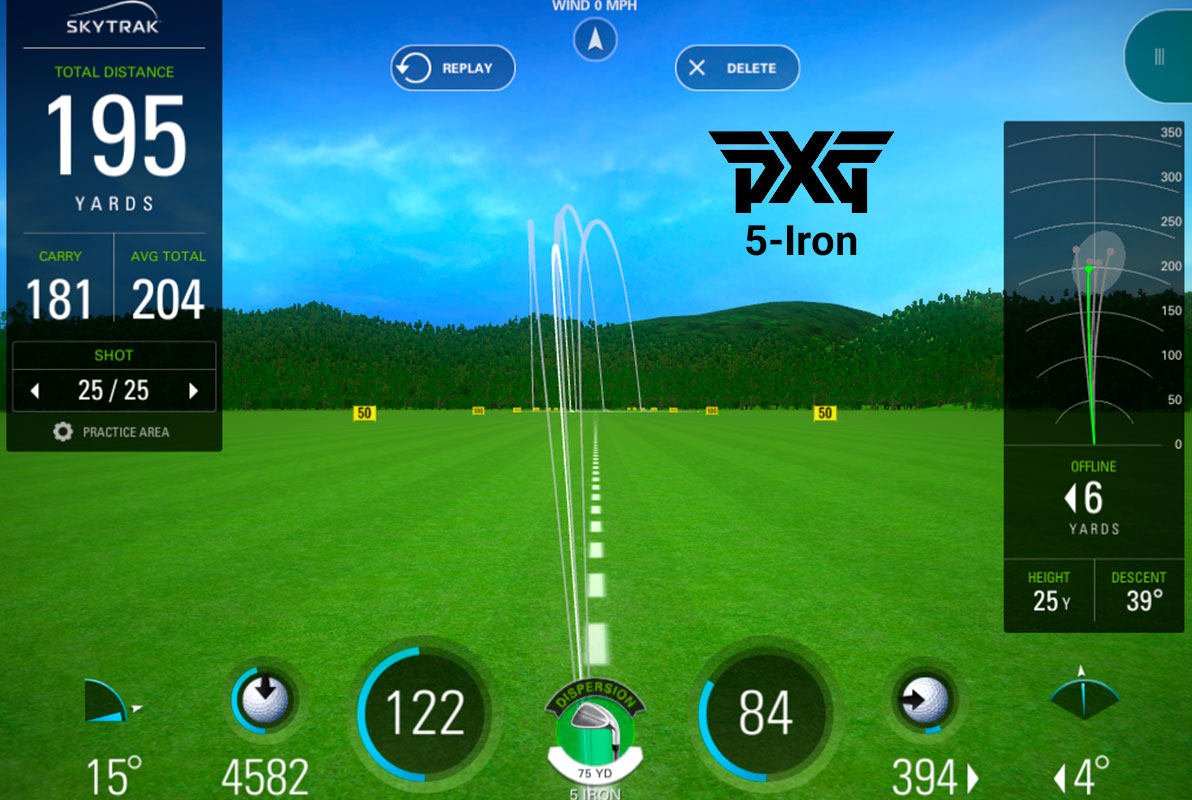 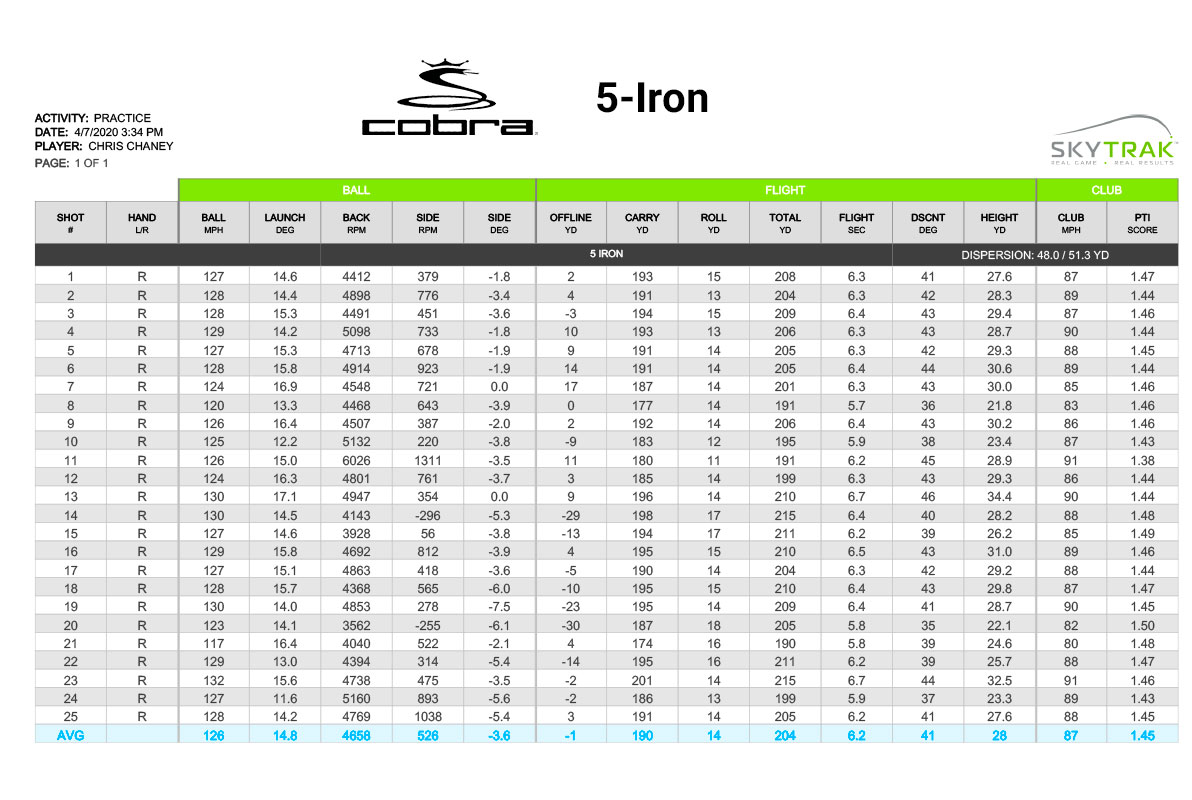 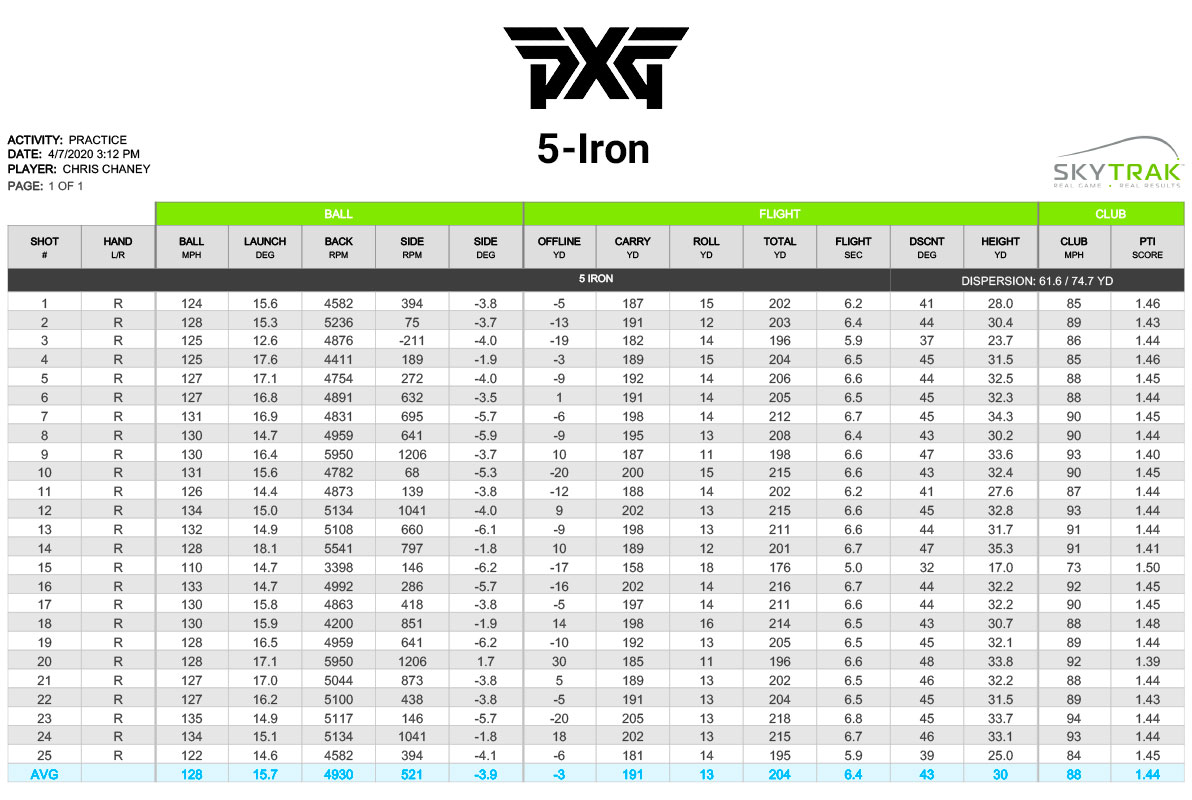 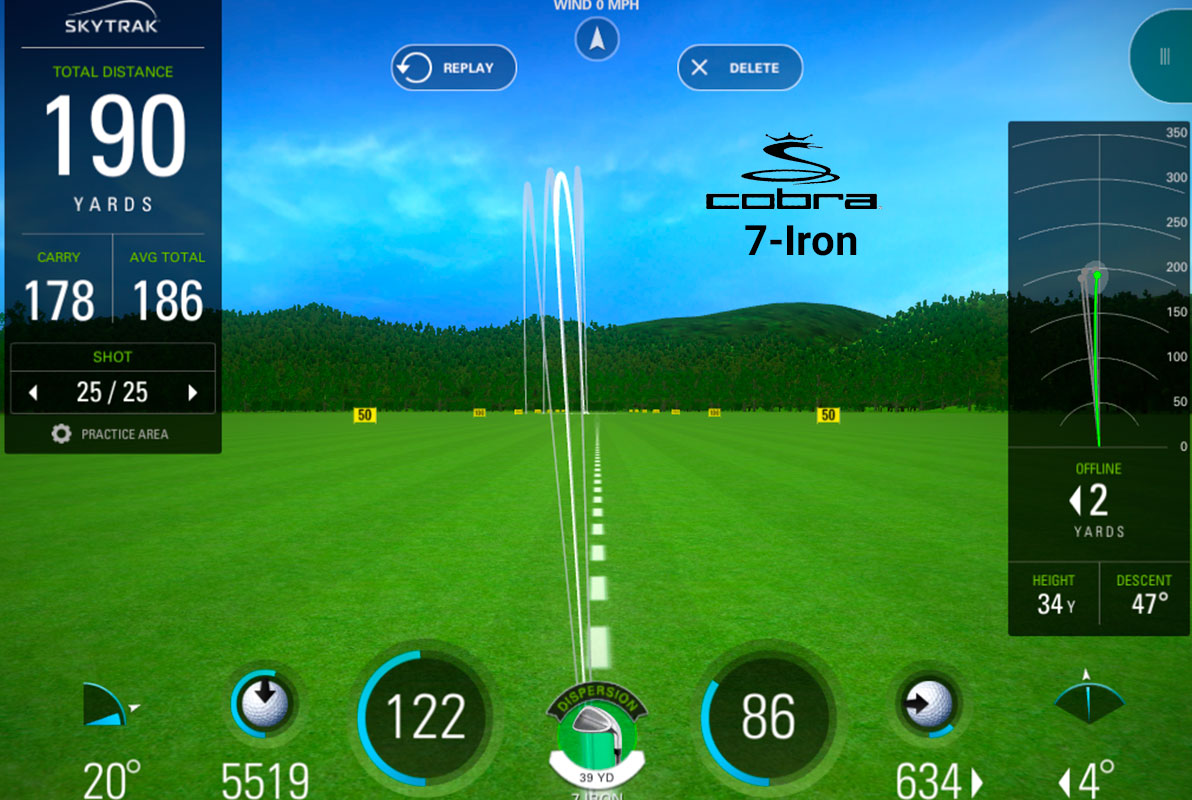 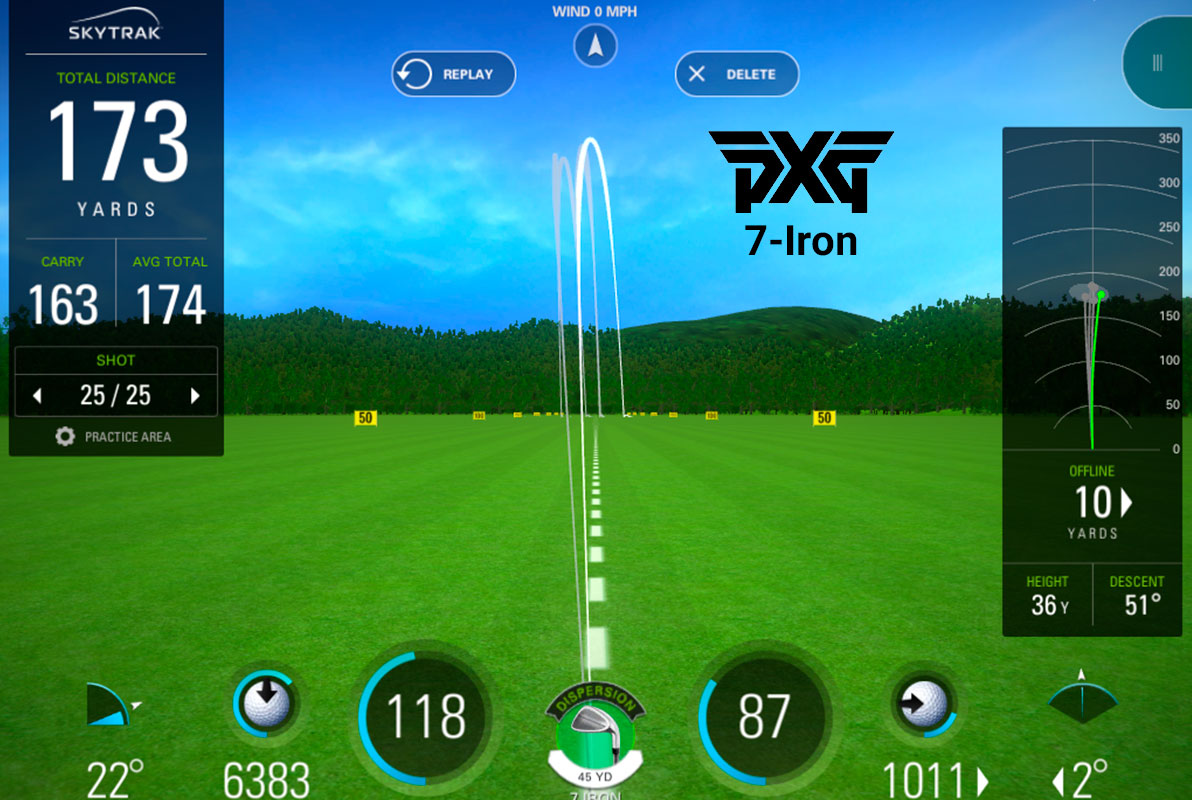 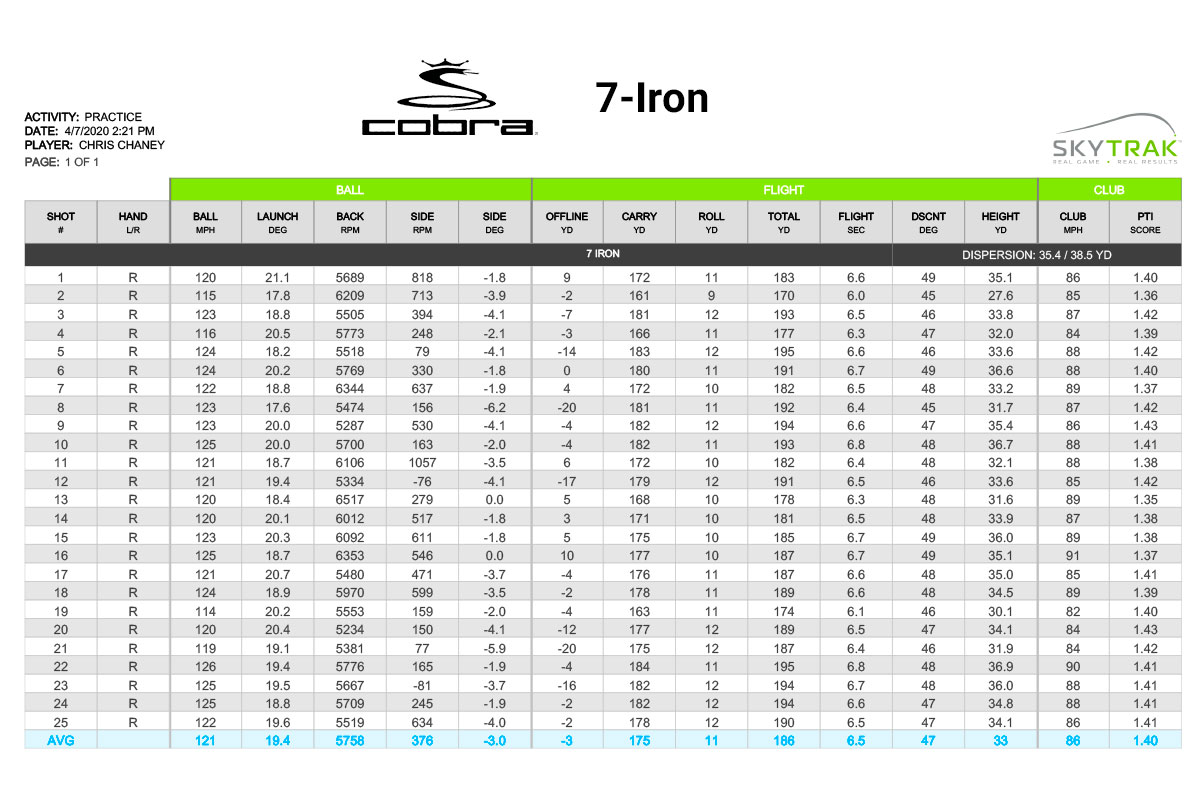 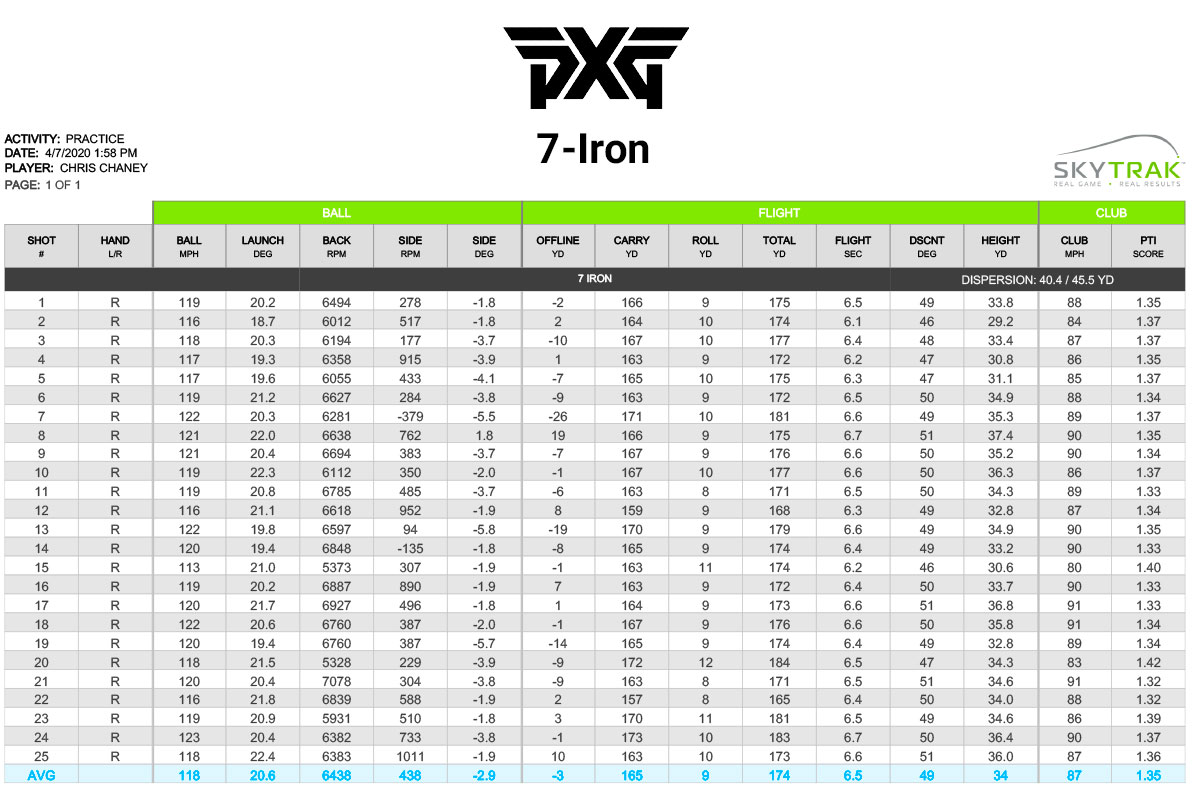 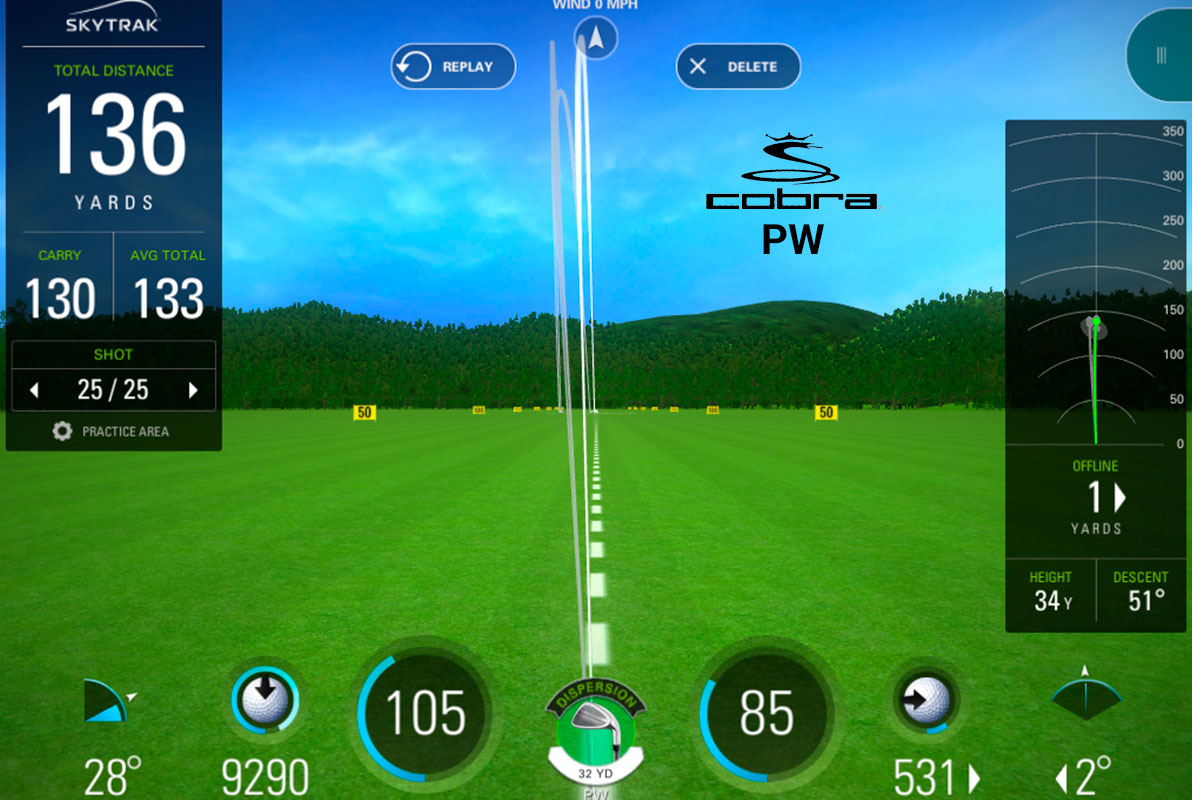 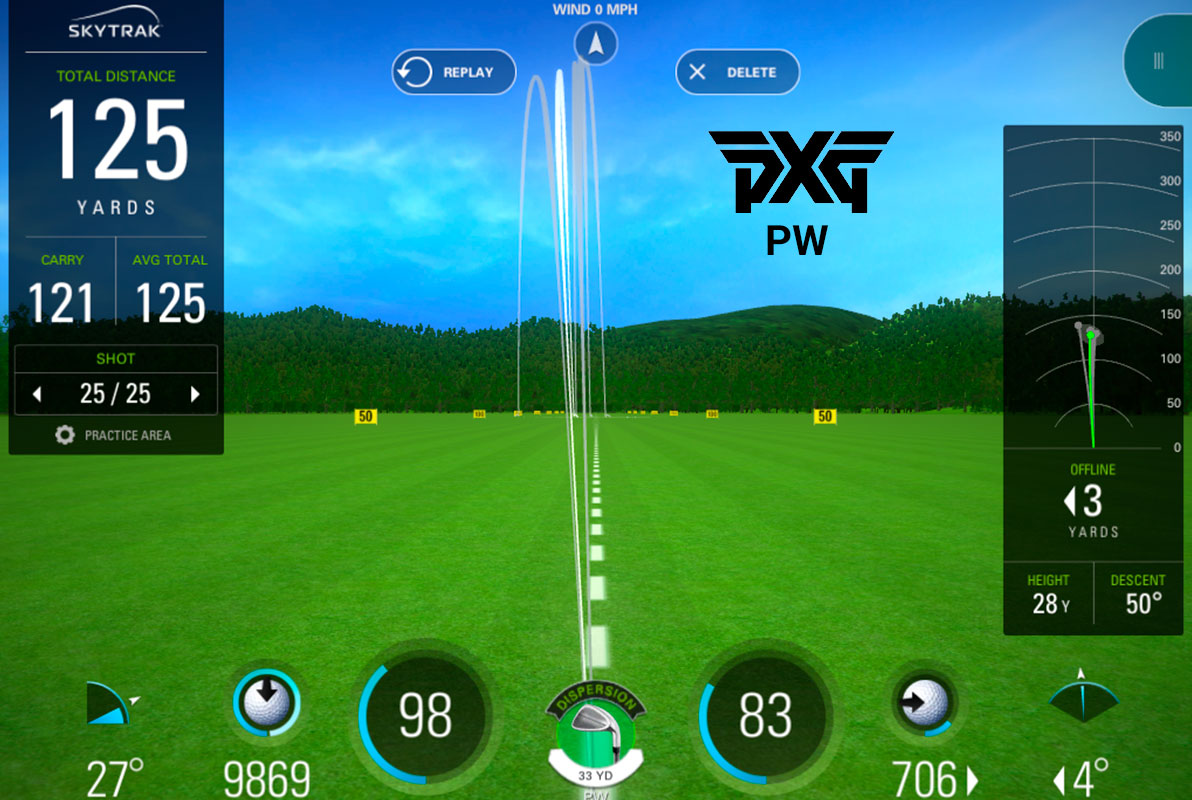 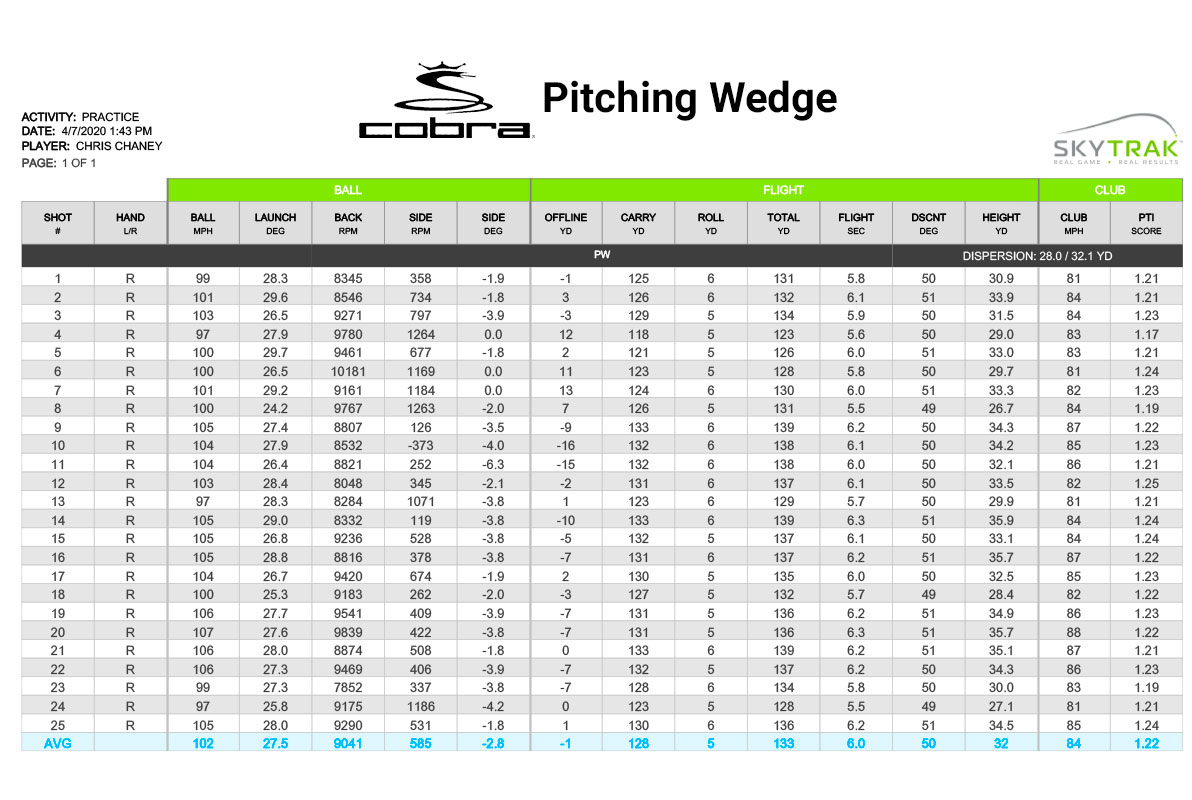 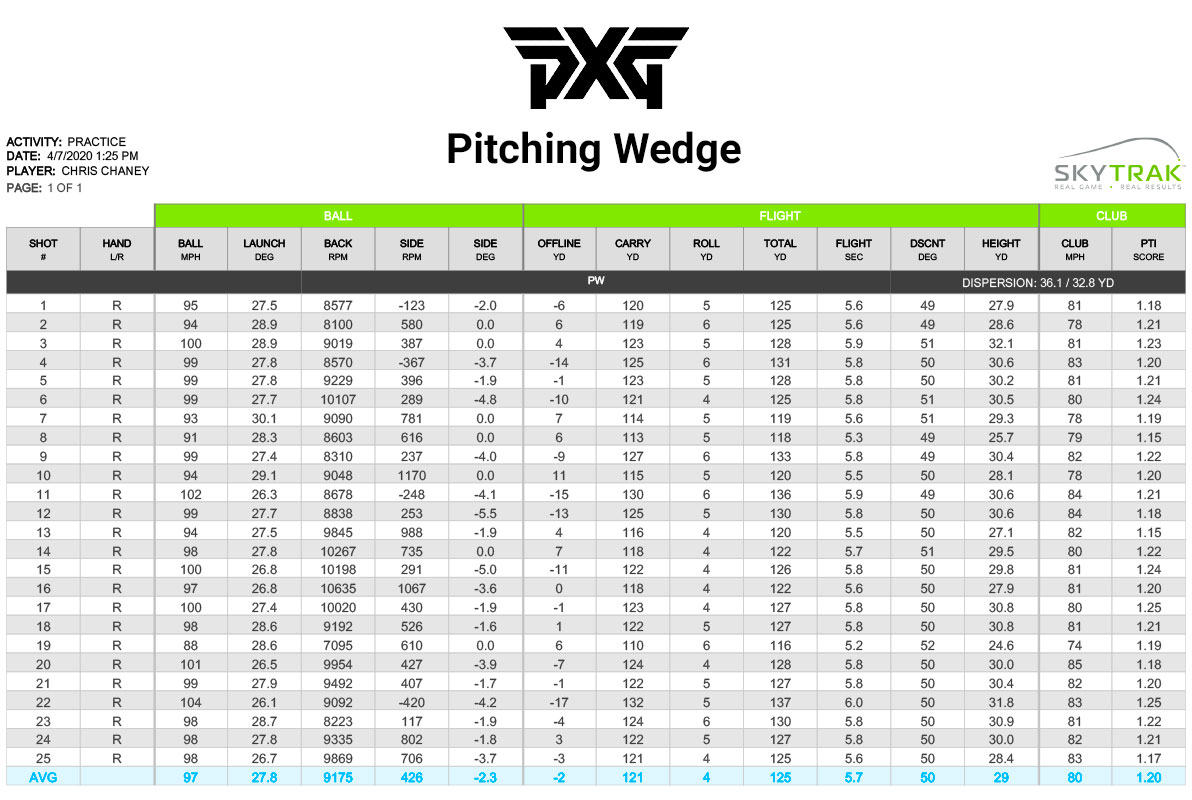 Similarly, the concerns about distance loss with shorter clubs proved to be negligible, and the dispersion of shots was much tighter.

When it came to the 7-irons, as you might expect, there wasn’t too much different between them except for one thing — distance. I was absolutely nuking the SpeedBack 7-iron, carrying it 175 on average with a total distance average of 186. For comparison’s sake, my PXG 7-iron was flying 165 with 174 average total.

Lastly, the pitching wedge comparison was a eye-opening as well. It did feel awkward to have a super-long pitching wedge in my hand, but a mix of the comfort of hitting that same length club throughout the session was reassuring. It actually made my normal-length PXG club feel miniature.

As you’d expect from a longer-length club, the Cobra pitching wedge offered some more distance, a nice perk for those looking to hit it a bit longer, but that could be expected given the longer club shaft. The Cobra dispersion pattern was slightly tighter than the PXG, but nothing to get overly excited about. 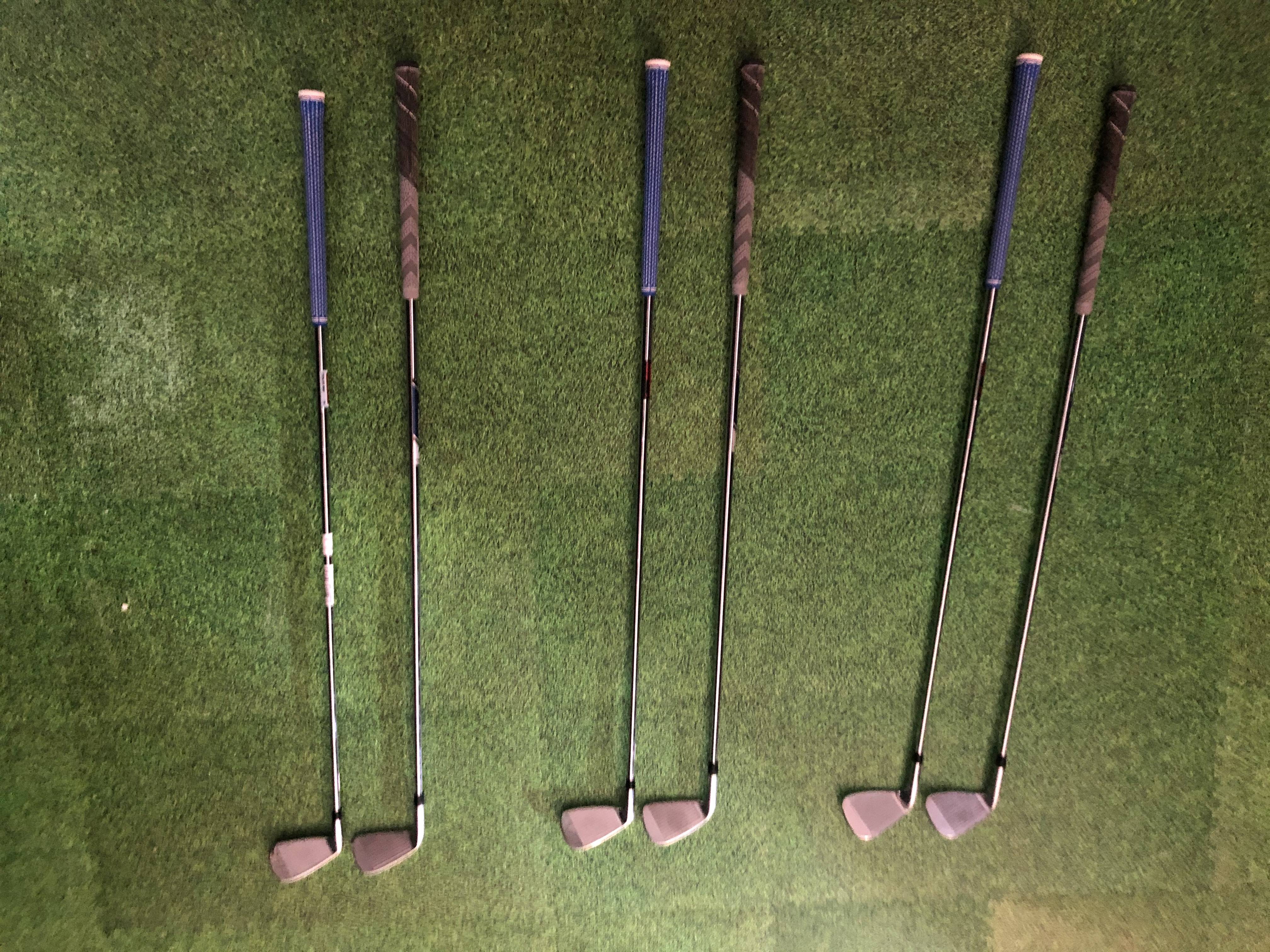 Bryson is on to something, at least for the majority of his bag.

Personally, I found the single-length irons to be much more consistent throughout the bag than the traditional iron set. My initial presumption that single-length irons — especially as it pertained to long irons — would be very beneficial for me bore itself out in the data.

Every club from a 2 or 3-iron at a 7-iron length would be an instant boost in confidence — admittedly it could be a result of my own inhibitions with those clubs — but even getting into the mid-to-short irons, the moderate distance gains and tight dispersion patterns proved, at least to me, that single-length is something to be taken very seriously.

There is definitely a learning and mental curve that needs to be taken, but for consistency of strike and ease of use — I can see this being especially beneficial for new or beginner golfers — single-length may be the way to go.

The one drawback I have is when it comes to scoring clubs and distance wedges. The longer club simply feels awkward when you get to clubs you’re generally used to being shorter than the 7-iron length.

I believe that this can be overcome for a few of those in close proximity to the 7-iron, perhaps down to pitching wedge — clubs that you’ll almost always be hitting full — but once you get into your distance wedges and specialty shots around the green, that feel and comfort with traditional-length wedges required for chips, pitches and sand shots, especially, may not be something you want to mess with.

All told, I came away incredibly impressed, so much so that my next set of irons (which after conducting this review seem to be closer to the horizon than previously thought) will definitely explore the possibility of single-length from long irons through the bottom of the bag, where I’ll likely continue with a traditional wedge setup.