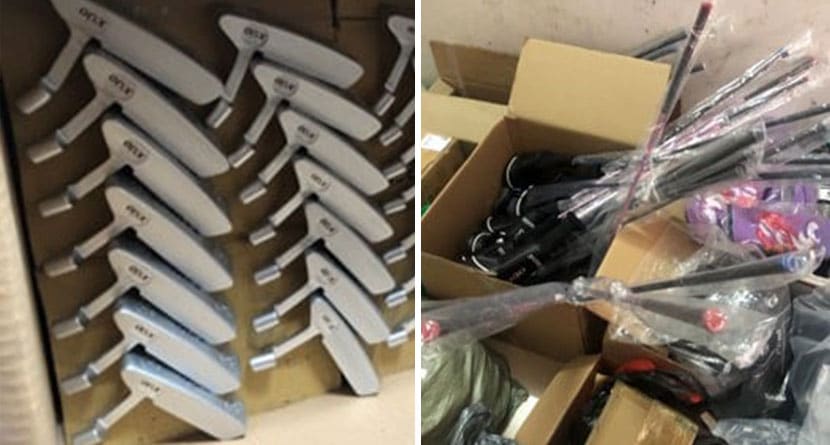 While the golf industry enjoys its biggest boom in decades, equipment companies are even more vigilant when it comes to stemming the creation and dissemination of counterfeit equipment.

On the heels of the largest raid in the history of the U.S. Golf Manufacturers Anti-Counterfeiting Working Group (The Golf Group), a watchdog group representing six of the largest golf manufacturers in the world, in which over 12o,000 pieces of counterfeit equipment were seized last year, another sizable seizure was made earlier this summer in China.

Conducted in coordination on June 2, The Golf Group announced that three raids took place with the help of the Shanghai Police in Dongguan City, Guangdong Province. In total, over 9,769 pieces of clubs and components as well as 10,600 pieces of trademark labels bearing the names of XXIO, Titleist, TaylorMade, PXG, Callaway, and PING were found and seized.

“The job of protecting golfers across the world from counterfeiters is one we take tremendous pride in,” said Lisa Rogan, Director of Brand Protection for Titleist. “Successful raids like these serve as a poignant reminder to all counterfeiters that their work will not be tolerated and that our group will work swiftly with law enforcement across the world to stop these illegal acts.”

Formed in 2004, The Golf Group has supported the efforts of international law enforcement and government agencies to conduct raids and investigations of counterfeit operations, as well as raise public awareness of the issue. Since its inception, the Golf Group’s efforts led to the shutdown of more than 1,500 websites and authorities have seized more than two million counterfeit golf products.

Last year’s massive effort sheds some light on the severity of punishment for these crimes. In all, 15 counterfeiters were found guilty in a Chinese court, according to the U.S. Golf Manufacturers Anti-Counterfeiting Working Group.

GolfDigest.com’s Mike Stachura reported that “the counterfeit sales were coming from the Chinese online site Taobao, the world’s largest e-commerce site that is a consumer-to-consumer site much like eBay.