Inside The Numbers Of Si Woo Kim’s Impressive Victory 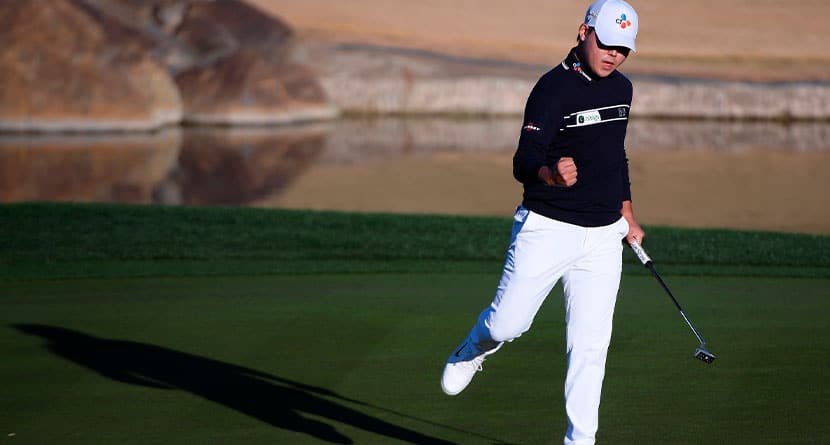 You had to be impressed with young Si Woo Kim this weekend at The American Express at PGA West. To see him step up to shoot an 8-under par 64 in the final round to win by one on the water-everywhere Stadium course? Very impressive.

Here is my list of four noteworthy features of his game in my reverse order of impact:

He closed with birdies on 16 and 17 and a solid par on the difficult 18th hole. With water looming down the entire left side and very much in play on both the drive and approach shot, Si Woo hit a 263-yard drive into the fairway.

From 175 yards, he hit his approach shot safely to 20 feet right of the pin for a stress-free 2-putt par. Given the circumstances, very impressive!

One eagle, 23 birdies and only 2 bogeys!

Shortly before the PGA Tour implemented Strokes Gained analysis in 2010, I published an article describing the three constants that I’d noted in the PGA Tour winners. These were 70% or higher in each of these basic, but important “Old School” stats:

As you can see in the chart below, Si Woo Kim dominated the field:

(We are giving Si Woo the benefit of ONE percentage point below 70% in his putting considering how he blew past the other two goals.)

The two most prevalent and consequential errors in the AmEx were Driving and Approach shot errors:

The Stadium course had water very much in play for the drive on six holes. Accordingly, penalty driving results were 26% more frequent for the AmEx field than the 2020 Tour Average. Again, SI Woo had none.

The Stadium course offered nine greens very well protected by water. Here the AmEx field fell prey to the water with 2.6 times the frequency of the 2020 Tour average.

In other words, in a field this size and only three relevant rounds (one round was played on a course without ShotTracker), the 2020 Tour average would see 63 approach penalties. The AmEx field suffered 166 approach penalties – more than one for every player in the field. Si Woo managed his three rounds with an impressive zero.

Given the course and the relative performance of his peers, I view Si Woo’s complete avoidance of errors to be the more impressive of his very impressive accomplishments.

What do you think?