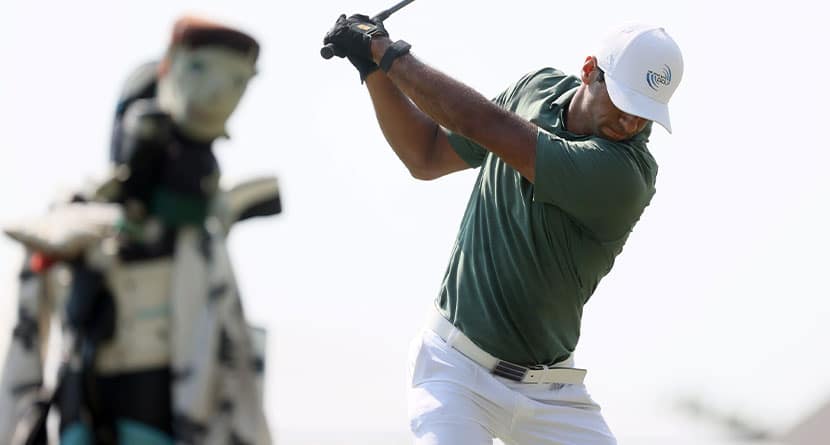 For a game that is eager to pat itself on the back for its inclusive and welcoming nature, golf can be a bit stuck in its ways, as many golfers know.

Similarly and ironically, for a game that routinely is gawked at and prodded for its lack of fashion sense, there are numerous examples of questionable clothing choices that are made at the very highest level of the game.

Need we count the way? Thy names are Furyk, Sergio, Tiger and Poulter, among others. And still, those among us who wear Tommy Bahama shirts, the wrong-sized pants and tube socks up to their knees have the false sense of confidence and audacity to snicker and sneer at someone who uses… wait for it… iron covers.

A relatively modern phenomenon, iron covers do pretty much what their name suggests: covers or protects one’s irons. Why the stigma became attached is unknown, but for one PGA Tour rookie, he doesn’t care.

Aaron Rai will likely pop up on your television screen at some point or another this PGA Tour season. The 26-year-old Englishman is a two-time European Tour winner and a three-time Challenge Tour winner. He earned his Tour card through Korn Ferry Tour finals and has a nice story to tell, but it’s unlikely he’ll follow in Brooks Koepka’s footsteps and do a spread for GQ.

What he cannot be criticized for, however, is being true to himself and his upbringing. Rai routinely wears two gloves, one on each hand and sports the game’s notorious signifier of “someone who can’t play”: iron covers.

He’s not going to change, however. The big money and free clubs on Tour are nice, but that doesn’t mean he’ll stop appreciating what he has and care less about what he’s got.

Aaron Rai, who has won multiple times on @EuropeanTour, plays with iron covers. Surprising, right? The PGA TOUR rookie gave Jason and Michael the incredible story on how it all started.@JasonSobelTAN | @ESPNCaddie | @PGATOUR | pic.twitter.com/BGOgXRqFUz

“It started from the age of four years old, when my dad used to pay for my equipment,” Rai told SiriusXM PGA Tour Radio. “He paid for my membership, paid for my entry fees. It wasn’t money that we really had, to be honest, but he’d always buy me the best clubs.

“When I was about seven or eight years old, he bought me a set of Titleist 690 MBs, and they were like 800-1,000 pounds back then, just for a set of clubs for a kid. I cherished them. When we used to go out and practice, he used to clean every single groove afterward with a pin and with baby oil.

“To protect the golf clubs, he thought it would be good to put iron covers on it. I’ve pretty much had iron covers on all of my sets ever since just to appreciate the value of what I have, and it all started with that first set of Titleist 690s.

That’s hard to argue against.