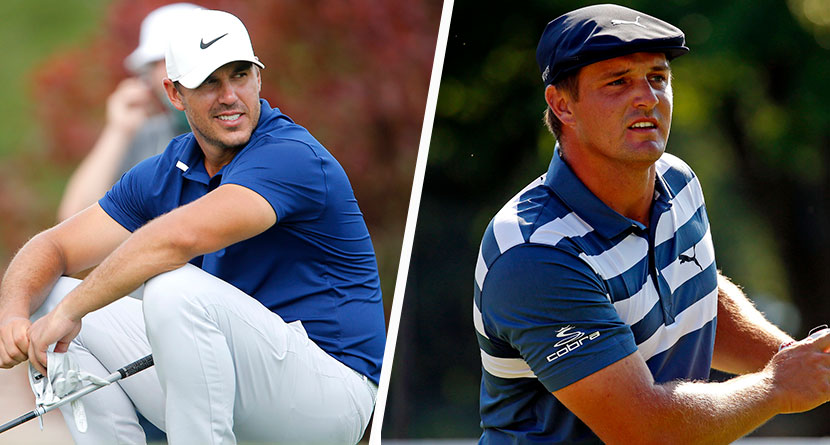 Golf, by its very nature, is a non-confrontational sport, but Brooks Koepka seems hellbent to turn it into one.

While Tiger Woods will likely be golf’s most popular figure until he hangs up his spikes, the likes of Koepka, Bryson DeChambeau and Patrick Reed are doing their fair share to keep some interest in the sport on a week-to-week basis while Woods enters the latest phase of his career.

And while all three — Koepka, DeChambeau and Reed — have had their respective run-ins, it’s Koepka and DeChambeau, mostly a result of Koepka’s personality, who have butted heads directly.

Through a handful of non-denials and past run-ins, it’s become increasingly clear that neither player cares greatly for the other, and this past week at the WGC-FedEx St. Jude Invitational, Koepka added a little fuel to the rivalry’s fire by mocking DeChambeau on the course on Friday as well as taking some shots a PGA Championship preview article with Golfweek.com’s Eamon Lynch.

The pair’s dust-ups date back specifically to Koepka calling out DeChambeau for slow play last year. Feeling he had been singled out, DeChambeau confronted Koepka’s caddie and ironically told Ricky Elliott that if his boss had an issue with him, he should tell him face-to-face.

Small quips and instances made news over the last 12 months, but Koepka added more fuel to he proverbial fire in the past few days.

On Friday, following DeChambeau’s attempt to gain relief from a dangerous animal condition, which amounted to a few ants near his ball during the first round of the WGC-FedEx St. Jude Invitational, Koepka poked fun at DeChambeau the following day when he missed a fairway and joked that there were ants near his ball.

“There’s an ant,” Koepka said, using his club to point towards the ground while talking over his shot. “I’m just kidding.”

While making fun of DeChambeau for arguably attempting to simply use the rules to his advantage to get a better lie is one thing, Koepka made no qualms about how he feels in a Q&A with Golfweek’s Lynch, which was posted over the weekend.

“I enjoy it when people give me a jab,” Koepka said. “I’m not going to start anything, but if you’re going to take a shot at me, I’ll take a shot at you. I’ll make sure my shot hurts a little bit worse.”

Guided into the DeChambeau conversation, Koepka, as he is known to do, spoke candidly.

“Golfers hate confrontation. I don’t know what it is, but they’re afraid of it,” he said. “With a lot of guys, when they fire somebody, they’ll have their manager fire them instead of having the balls to do it themselves. That’s ridiculous. If you have an issue, go say it face to face. Listen, I don’t have to like you, but I can respect you.

“I’ve never had a problem with Bryson. I just thought he was slow. Then when he went up to Ricky and was like, ‘Tell your man to come find me and say it face to face.’

“Well, I thought that was kind of an oxymoron to go to Ricky. I thought it was kind of cowardly, if I’m honest. But at the same time, if he’s going to say that then I’m going to go up and say, ‘Okay, I’m here.’

“We’re two totally different people. He wouldn’t be anyone I would hang out with outside of golf, and I think he would say the same thing. Which is totally cool. There’s nothing wrong with that. Just two completely different personalities. I’ve got no issue with him. He’s just never going to be my best friend, we’ll put it that way.”