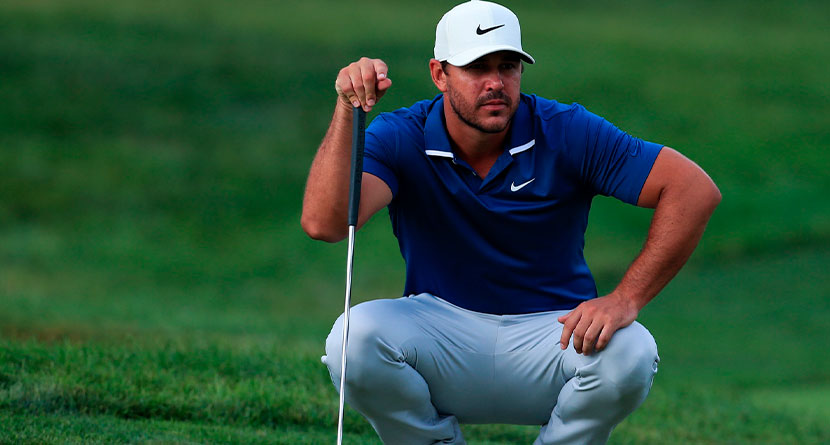 In the build-up to the PGA Tour’s restart last month, there was a lot of hypotheticals about who the pandemic-induced break “helped” the most – not in the sense that a pandemic is good for anyone, but instead who could have really used that time off?

The most popular answer, as with anything in golf, was Tiger Woods given his age, body restrictions and recent admittance of fatigue, but there was someone else who clearly would benefit from some R&R: Brooks Koepka.

Coming off a knee injury and subsequent surgery that the four-time major champion described as “excruciating,” Koepka admitted that he benefitted from the time off and backed up that notion with a solo 7th-place finish at Harbour Town in the second event back.

However, since then Koepka has gone MC-T62-MC in the last three weeks as he heads into back-to-back title defenses at the WGC-FedEx St. Jude and PGA Championship, and his short-game coach, Pete Cowen, said that if he were a horserace trainer, he’d say Koepka had “absolutely no chance” to defend either given his current form.

Cowen, a straight-shooting Englishman, spoke to The Daily Mail this week about (one of) his star pupil(s) and didn’t pull any punches.

Cowen On Koepka’s Struggles: “We don’t need excuses, we need to sort it out.” https://t.co/AAXyL8ZuWy pic.twitter.com/HFGZHfneYg

“We all know Brooks is the man for raising his game at the big events – and this is going to be his biggest test yet, because he knows he’s not swinging the club well and he’s not happy with his game,” Cowen said. “But we all know golf, so let’s see if we can help put him back together again.

“When you get an injury as bad as that you’re never 100 percent right again. But I don’t think it’s a problem. That’s finding excuses for the fact he’s swinging it badly. We don’t need excuses, we need to sort it out.”

Like one of his South Florida neighbors, Cowen says that at his best, Koepka has the confidence of someone like Tiger Woods, and it may behoove Koepka to take a page out of Tiger’s book when it comes to dealing with his struggles.

Instead of saying something like he did following his missed cut at the 3M Open last week — “I’ve been playing so bad lately.” — Cowen thinks there should be an element of faking it until he makes it.

“When he’s at his best, he’s bulletproof,” Cowen said. “He doesn’t care what other people are doing, he just puts results on the board. The US Open at Shinnecock Hills in 2018 was a classic case in point. With his caddy Ricky Elliott, I was talking it through with him, how he played every hole in the final round, he was all over the place at times. But he had belief he would win. He had body language that said, ‘I’m going to get the job done.’ That’s what we need to get back.

“It used to be a cliché when Tiger was struggling, he’d tell everyone that he might not be playing well but he was getting there. Brooks needs to think of it in terms of work in progress. Everyone has to go through these mental tests, but I’ve no doubt he will come through. It’s such a funny game, it wouldn’t surprise me if it was this week in Memphis, given he’s got such a good record at that course.”

We’ll find out soon enough in this truncated season. Koepka is off on Thursday at TPC Southwind at 1:50 p.m. EST alongside Viktor Hovland and Patrick Reed.

The following week at TPC Harding Park outside of San Francisco, Koepka goes for his third consecutive PGA Championship.