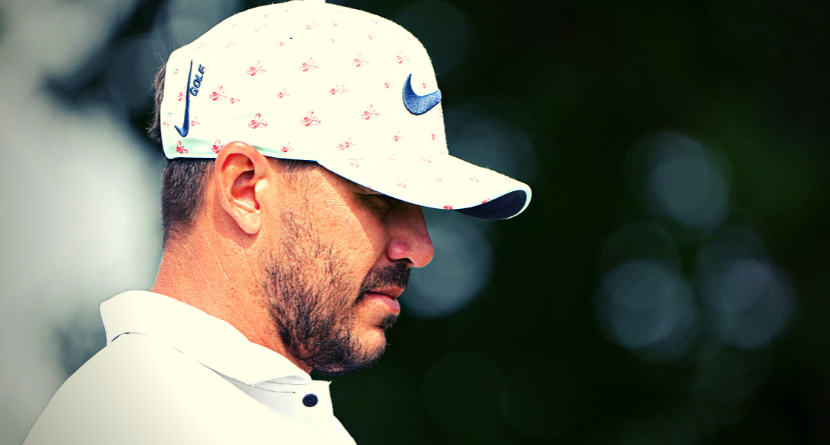 Brooks Koepka is putting the PGA Tour in his rearview mirror.

According to multiple reports, the four-time major champion has signed on with the LIV Golf Series, confirming long-held suspicions that arose once again when Koepka grew testy with the press for broaching the topic at the U.S. Open.

The 32-year-old’s posturing about the sanctity of the national championship sure seemed defensive at the time. Now it feels disingenuous.

He was justifiably roasted on Tuesday by members of the same media corps he scolded.

Koepka can of course take the $, but it’s worth pointing out …
• he’s said repeatedly over the years he doesn’t play for money (lol). Cares about competition!
• he conveniently waited for other big names to take the LIV heat first
• he was comically full of shit last week

“I’m here at the U.S. Open,” Koepka said. “I’m ready to play the U.S. Open, and I think it kind of sucks, too, you are all throwing this black cloud over the U.S. Open. It’s one of my favorite events. I don’t know why you guys keep doing that. The more legs you give [LIV Golf], the more you keep talking about it.”

When one reporter countered his belligerence by suggesting the “black cloud” of an enemy circuit would persist long after the U.S. Open was completed, Koepka offered up an awkward analogy.

Few performances have ever been less sincere than Koepka’s “how dare you, I haven’t even thought about this” routine at the US Open last week. Jena was more convincing and committed to a role in the Sharknado movie.

“I know, but you can’t drive a car looking in the rearview mirror, can you?” he said.

Prolonged stretches of inactivity brought on by a series of injuries have chipped away at Koepka’s reputation as the game’s premier big-game hunter. Still, his presence gives LIV Golf another Top-20 player (he’s presently 19th in the Official World Golf Ranking) while simultaneously subtracting a marketable star from PGA Tour programming.

Koepka, who once spent 47 weeks as the top-ranked player in the world, brought a degree of mainstream cool to the sport. He professed a desire to compete well in the four biggest events of the year and wasn’t particularly interested in the rest. So from that standpoint, he seemed like an odd match for a circuit whose appeal is rooted in huge purses, not prestige.

With Koepka enlisted, the Saudi-backed breakaway league now boasts eight major champions. Koepka’s haul (four) is second only to Phil Mickelson’s (six). Many have posited that Norman is trying to stockpile major winners to apply pressure to the various governing bodies who control the invite lists for those events.

when you can’t LIV without each other pic.twitter.com/oZEBtSvcpR

A LIV subplot that’s actually worth monitoring is Koepka’s reunion with his longtime nemesis, Bryson DeChambeau. Perhaps they’re not so different after all.