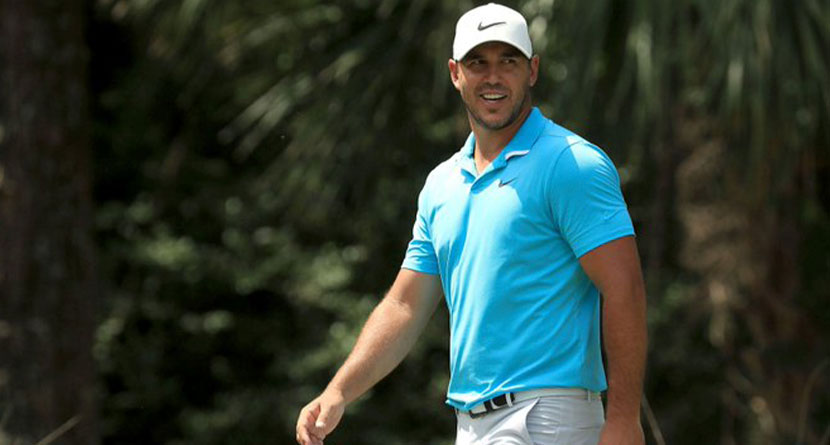 It all started with a simple question following Brooks Koepka’s opening-round 4-under par 67 at the RBC Heritage last Thursday.

On the topic of players wearing microphones during competition rounds, the best players in the world are seemingly split. Justin Thomas is adamantly against it while  his good friend Rickie Fowler — as well as Adam Hadwin — proved that it was a nice change of pace for the broadcast to capture the voice of someone in the heat of it.

“Guys have talked about whether they want to wear microphones or not wear microphones during a round,” a member of the media asked Koepka on Thursday. “Do you have any thoughts on it one way or the other?”

“Yeah, I do,” Koepka said, which is when you know it’s about to get good. “I don’t understand why they want us to wear a mic when there’s a boom mic that stands 10 feet away from every shot that I hit. If the announcers would just shut up and listen, you could hear every word that we’re talking about. I don’t understand what the thing is. Half the time the lady’s holding a boom mic, and she’s listening to everything we’re saying all the way down.

“If they would just shut up, they could hear everything.”

As has become the norm, when Koepka speaks, the majority of the golf world listens, which includes CBS lead analyst Nick Faldo who clearly didn’t take kindly to being told to shut up and listen. As such, Faldo went out of his way on Friday to lay out while Koepka was hitting in an exaggerated effort to attempt to prove that tournament golf needs commentary.

“Well, he told we announcers to shut up… let’s see what he has to say about that one,” Faldo commented before predictable silence from Koepka. “Fascinating stuff.”

If observing Koepka during his ascendancy over the past few months has taught us anything, it’s that when someone gets petty, he can go even smaller. Waiting for the right opportunity, Koepka took to Twitter during a weather delay on Sunday afternoon to highlight one of his best shots of the week by taking a shot at Faldo.

En route to a final-round 6-under par 65, Koepka came close to holing his tee shot on the par-4 9th hole, setting up his second eagle of the front nine. In the clubhouse when the PGA Tour account tweeted the highlight, Koepka added a simple caption: “Fascinating stuff out there…”

Fascinating stuff out there… https://t.co/mjxuDUEtax

Faldo, to his credit, took the jab in stride, offering a laughing emoji as well as a thumbs up.

Koepka added one more dig in his farewell Tweet to the RBC Heritage, saying “Thanks for the fascinating times.”

Thanks for the fascinating times at @RBC_Heritage

Faldo-Koepka doesn’t have quite the vitriol of the Koepka-Brandel Chamblee beef, but it’s something to keep an eye on over the next few weeks and months.