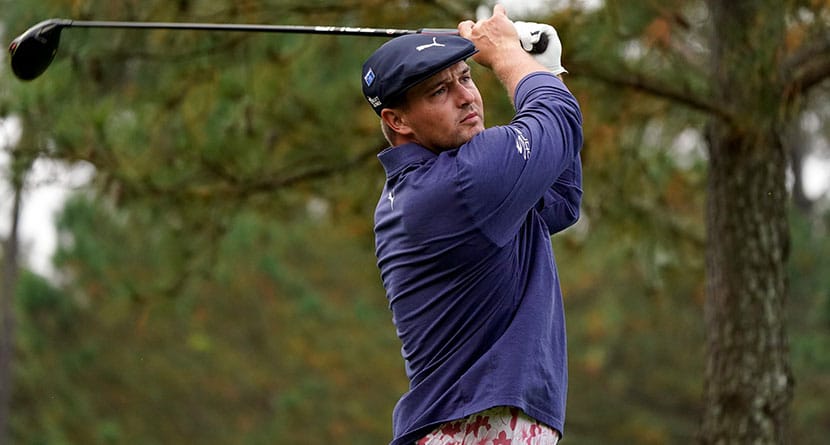 Unless you spend a good amount of time on social media, Bryson DeChambeau has been a ghost to the greater golf world since his disappointing week at Augusta National in December.

By way of an update, the 2020 U.S. Open champ has been been spending his offseason — if you want to call it that — at home in Dallas working on, you guess it, swinging faster.

Over the course of the past few months, DeChambeau has popped up occasionally on social media, being featured in YouTube videos and spending time with World Long Drive champion Kyle Berkshire, most recently going through a grind session to reach 145 mph clubhead speed.

Upon arriving in Hawaii this week for the Sentry Tournament of Champions, DeChambeau made some small waves on social media with a range session for which he felt the need to apologize to Hideki Matsuayama and his team for potentially distracting them.

Heard 211 earlier today and that after the session he stopped to apologize to Hideki and his camp for the grunting and self-pump-up utterances coming from the end of the range.

DeChambeau’s quest for distance obviously hasn’t stopped, and he told Golf Channel’s Todd Lewis one of his overarching speed and distance goals for the year: reach 210 MPH ball speed.

“I haven’t given up the pursuit of trying to get faster,” DeChambeau said. “I was fortunate enough to spend some time with Kyle and working with Chris Como on some stuff to try and get a little bit faster this year.

“Whether it happens this week or not — it’s obviously body-dependent — but yesterday on the driving range, I got it up to 211 MPH ball speed, so that was cool. It doesn’t mean I’m going to be there… Yesterday on 18, I got one to 201 pretty easily. It just feels easier to move the club faster.

“If I can ever get it to around 207 to 210 on average with the driver out on Tour where that’s just kind of where I’m at, then at that point, I’ll probably be like ‘okay, that’s good enough.’ That’s where Kyle’s at, and I think that if I can get to at least where he’s at, that will be good for me for years to come.”

DeChambeau currently leads the PGA Tour at 192.80 MPH and has yet to break the 200-mph mark in competition.

The Plantation Course at Kapalua is a great opportunity for DeChambeau to get a jump-start on his distance goals as the generous fairways allow for a little more leeway off the tee.

DeChambeau will begin his 2021 campaign alongside Brendon Todd on Thursday at 4 p.m. EST. Coverage begins on Golf Channel at 6 p.m.