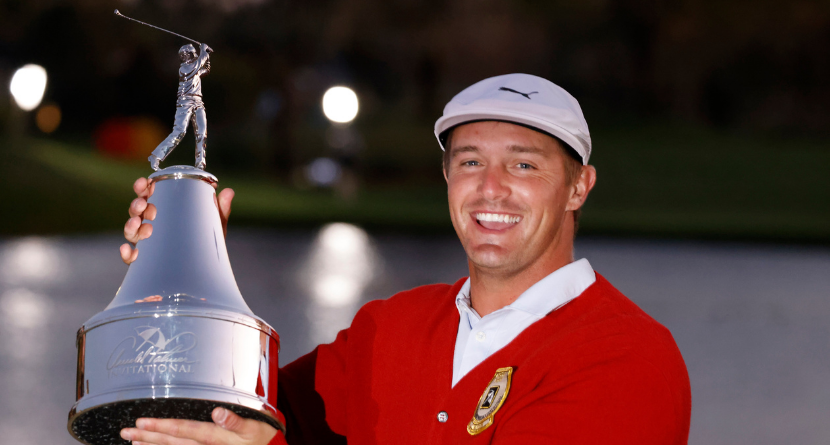 Bryson DeChambeau won’t be making his return from injury this week after all.

The 2020 U.S. Open champion posted a video to his social media accounts in which he declared himself unfit to defend his title at the Arnold Palmer Invitational.

“Tough decision right now,” DeChambeau says in the video, which was posted at 11:22 a.m. EST. “I have a lot of work to do to get everything back into order for this week. I just feel like it’s too short of a time to get back to 100 percent capacity. I’m at 90 percent right now, and I don’t want to go out there and hurt myself even more. I don’t want to come back early and have to take more time off.”


DeChambeau said he’s still hopeful that his wrist and hip injuries will be healed in time for the Players Championship next week.

An update on API. pic.twitter.com/fX0OgY7xF4

DeChambeau is rumored to have withdrawn from his scheduled appearance Monday morning in the star-studded Pro-Member tourney at Seminole Golf Club in Juno Beach, Fla. He was due to tee off at 8:06 a.m. EST alongside member Tom Nelson.

DeChambeau’s hiatus dates back to the second round of the Saudi International, from which he withdrew citing injuries to his left hip and left wrist. His last PGA Tour start was a missed cut at the Farmers Insurance Open in late January.

After the Twitter account for PGA Tour Communications posted the field last Friday with DeChambeau’s name included, his agent, Brett Falkoff, confirmed that his client intended to give it a go.

“It’s important to Bryson to try and defend at an event that has Arnold Palmer’s name on it, so he’s doing everything in his power to play,” Falkoff told PGATour.com last Friday. “He’ll continue to rehab over the next few days and without any setbacks, we’re hopeful he’ll be able to compete next week.”

Bay Hill Club, the tournament’s legendary home, was, of course, the site of one of the signature moments of DeChambeau’s career in 2021. Over the final two rounds, DeChambeau opted to cut the corner on the par-5 sixth hole, uncorking mammoth drives of 370 and 377 yards. His four-day total of 11-under-par 277 was good enough for a one-shot victory over Lee Westwood, giving him eight career Tour victories.

On Feb. 20, DeChambeau issued a statement from his social media accounts indicating his loyalty to the PGA Tour amid speculation that he was one of the players set to defect to the long-rumored, Saudi-backed Super Golf League.

Editor’s note: this story was updated Monday when DeChambeau posted a video announcing he had withdrawn from the event.