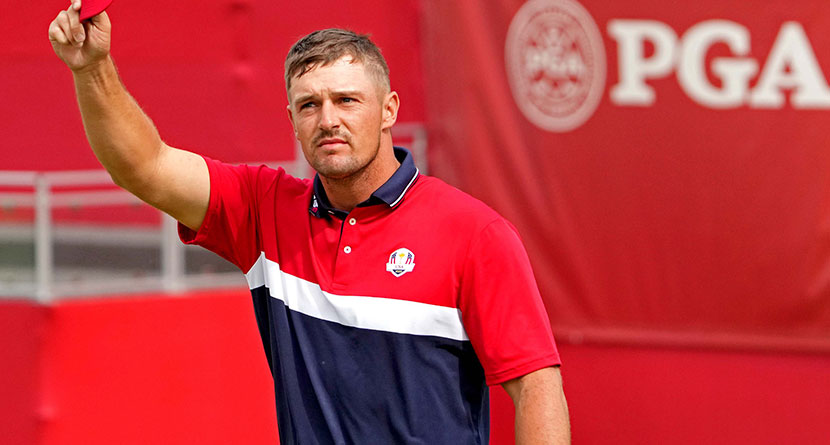 In a video that absolutely no one asked for, Bryson DeChambeau went to a Quest Diagnostics, a clinical laboratory, in Dallas to prove once and for all (?) that he isn’t using performance-enhancing drugs.

DeChambeau raised more than a few eyebrows around this time two years ago as he vowed to “come back (in 2020) and look like a different person.” Things went to the next level when he actually showed up looking like a literal different person, putting on 30 pounds of what he called “dirty weight gain bulk” and hitting the ball 15-20 yards farther on average than he did in 2018 and 2019.

Bryson was careful to document his transformation via Instagram and YouTube, but there were always those conversations in the corners of the internet and on tee boxes around the world wondering if DeChambeau was getting some artificial aid in his bulk-up.

While he’s leaned out over the course of the past year, focusing more on speed training than muscle-building, DeChambeau still is listed at 235 lbs., 40 lbs. heavier than he was two years ago.

“I want you guys to know that I did this in a way that was, hopefully, natural and just hard work,” DeChambeau said at the beginning of the video.

Unable to film inside the lab, DeChambeau reported that he had bloodwork and a urine sample done, but it would take more than a week to get the results, so naturally, the next five minutes of the video featured DeChambeau in one of his high-octane speed sessions.

Naturally segueing into a shirtless DeChambeau on a balcony in the Bahamas during this month’s Hero World Challenge, the results came back.

”All negative, as expected. You’re clean,” DeChambeau read from an email from a doctor. “Nothing!”

There you have it. Take that, haters.