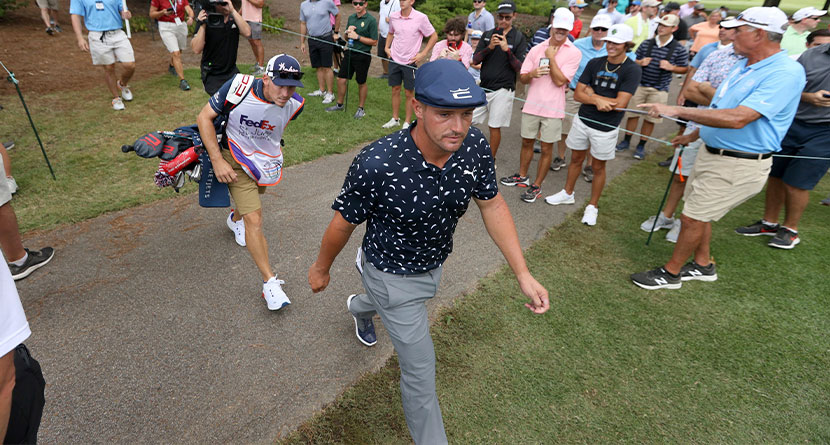 Bryson DeChambeau, in the absence of Tiger Woods, has emerged as the biggest story in the game of golf over the last 12-16 months by virtue of his polarizing nature.

Whether it’s his work off the course that has led to him becoming the fastest-swinging, longest-hitting player on Tour, his comments in the media that have drawn derision or his escalating feud with Brooks Koepka, DeChambeau has become the poster child in golf for whether you like him or not, you feel something about him.

And as a polarizing figure, coupled with the encouragement of Koepka to get fans to give DeChambeau a hard time on the course, life between the ropes for the 2020 U.S. Open champion has become increasingly tense by virtually all accounts.

Intentionally irritating calls of “Brooksy” in Bryson’s direction have been dismissed by DeChambeau as “flattering,” but increasingly and obviously the catcalls have bothered the world’s No. 7-ranked golfer.

As the season winds down, it seems as if we’ve reached the tipping point in the whole sordid ordeal over the past few weeks. What some believed started out somewhat funny and harmless has become increasingly more aggressive and irritating to DeChambeau, culminating with an outburst by DeChambeau witnessed by ESPN.com’s Kevin Van Valkenburg following the conclusion of the BMW Championship on Sunday.

DeChambeau fell to Patrick Cantlay in a six-hole playoff that saw multiple opportunities for DeChambeau to dispatch Cantlay only to see a number of make-to-win putts fail to drop. When Cantlay capitalized on a 17-footer for birdie on the 18th green and DeChambeau failed to match, the runner-up steamed up the hill at Caves Valley Golf Club towards the clubhouse.

Nothing about the Bryson DeChambeau experience is easy these days. My column from Caves. https://t.co/fP0rzllEEf pic.twitter.com/BF6LOJd19K

“Bryson DeChambeau was steaming,” Van Valkenburg wrote, describing the scene. “DeChambeau handed his hat to a gleeful adolescent fan standing at the rope line, then began a furious but silent walk up the steep hill that winds its way toward the Caves Valley clubhouse.

“Halfway up the hill, something happened that made me feel like we’ve arrived at a miserable place in the never-ending circus that is DeChambeau. A patron waited until DeChambeau had walked by, but was not out of earshot, then sneered from over the rope line, “Great job, Brooksy!”

“DeChambeau spun around in a rage and began briefly walking in his direction. ‘You know what? Get the f— out!’ DeChambeau yelled.

The simmering volcano seems to have been bubbling near eruption for some time now, and it’s not only DeChambeau who is getting annoyed. Van Valkenburg reported that NBC on-course reporter Roger Maltbie went after a fan for yet another Koepka-themed taunt during the final round.

Bryson does have a lot of support out here at Caves. He’s fist bumping fans, giving balls to kids, high-fiving people in Puma gear. But it’s also disingenuous to suggest the hecklers have gone away and the crowd is all in. Still a large chorus yearning to be heard.

The post-round altercation not escalating is undoubtedly a good thing, but Van Valkenburg rightly brought up a certain where do we go from here conversation. DeChambeau is clearly bothered by this behavior, but as Van Valkenburg pointed out on Golf Channel’s Golf Today on Monday, is it reasonable to expect this kind of incendiary behavior to stop?

As it’s been spoken about ad nauseam over the past 48 hours, it would seem as if the toothpaste is out of the tube with regards to fans attempting to get under DeChambeau’s skin by calling him his rival’s name. And to general sports fans, the statement on its face — he’s being heckled by being called the wrong name — seems genuinely innocuous, there will be golf fans who continue to do so for the foreseeable future.

What’s the right answer in all of this? Should DeChambeau publicly cop to the taunts bothering him? Should Koepka do a make-good by calling off the dogs, so to speak? Does DeChambeau just need to work on not letting the catcalls bother him?

Any and all of those options may be for the best, but there’s no guarantee any of it will make a difference. And that’s just the reality of the situation.