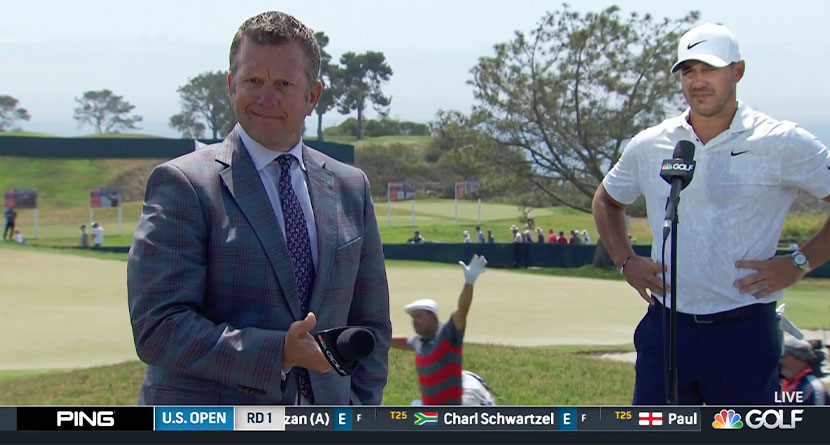 A large piece of the general sporting public’s fascination with this week’s U.S. Open at Torrey Pines was the ongoing rivalry between Brooks Koepka and Bryson DeChambeau, which burst into the mainstream last month at the PGA Championship.

When the USGA opted to not pair the duo together in the first two rounds, many saw it as a missed opportunity to bring in some more eyeballs.

In fact, it seemed somewhat intentional that the two men who won three of the past four U.S. Opens would have as little interaction as possible over the first two days of the tournament in San Diego with tee times on opposite sides of the draw.

At least one man, however, foresaw it as a potential opportunity to spice things up based on the timing of Koepka’s media rounds after he played and DeChambeau’s march to begin his round.

Brooks will be doing his post-round interview just around the same time Bryson is walking to the first tee, right?

Some two hours later, Barry W’s prediction came to glorious fruition following a 2-under par 69 from Koepka had him in the hunt and doing the normal carwash of media interviews. As Koepka waited to chat with Golf Channel’s Todd Lewis — the same interviewer who happened to be questioning Brooks during the viral PGA Championship video — DeChambeau walked behind Koepka again on the way to the first tee.

This run-in went unnoticed by Koepka at the time, but Golf Channel’s producers eagerly picked up on it and shared it after the day’s events on Live From The U.S. Open.

While Koepka, oblivious to it at the time, had no questions or comments on the stunt, DeChambeau was asked about it following his first-round 73.

“Heck, yeah, absolutely,” DeChambeau said when asked if he was trying to have some fun with Koepka. “Again, it’s one of those things people are thinking I was doing something, I wasn’t doing anything at the PGA Championship. I saw an opportunity and I just had fun with it.”

It was Koepka who had the last laugh on Thursday after sitting in a tie for fifth place when the horn blew due to darkness.

Meanwhile, DeChambeau headed to the practice area to grind out one of his now-normal post-sunset range sessions in search of some answers as he sits in a tie for 61st place.

8:35 p.m.: Bryson is still banging driver on the range. pic.twitter.com/4IW7DHfaWZ