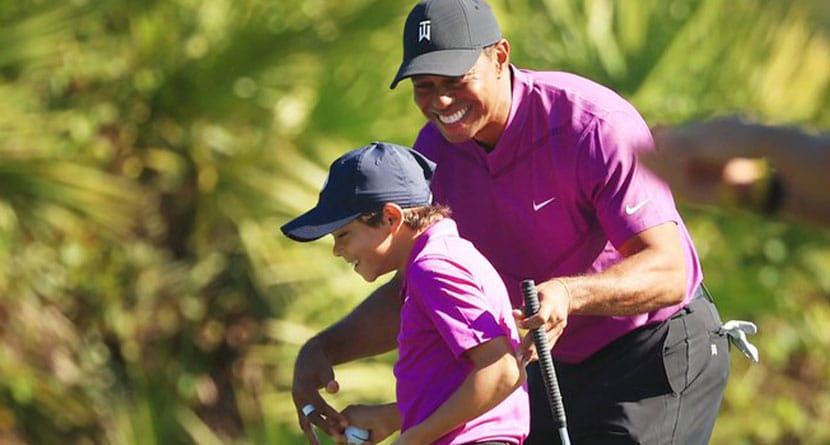 Charlie Woods had a lot to live up to this week at the PNC Championship, and that’s not even taking into account his golf game.

When you’re the only son of Tiger Woods, the best golfer of a generation and squarely in the conversation as one of the greatest of all-time, there is going to be plenty of expectation to live up to with regard to playing ability, but it was his playing partner during the first round, Justin Thomas, who put a little more pressure on the younger Woods to deliver.

Speaking to the media ahead of the Mayakoba Classic earlier this month, Thomas shared that Charlie’s needle is just as sharp as his father’s.

“For some reason, Charlie just always wants to beat me, it doesn’t matter what it is,” Thomas explained. “Although he’s never beaten me in golf or a putting contest, he still talks trash just like his dad. It will be fun. We’ll have that like inner tournament within a tournament, trying to shut his little mouth up, but it will be fun.”

A Thomas vs. Woods rivalry is brewing, and it doesn’t involve Tiger. @JustinThomas34 is looking forward to taking on Charlie at the @PNCChampionship. 😂 pic.twitter.com/5W5weFpOvV

Paired with the Thomases in the first round, Charlie acquitted himself quite nicely as it pertained to his golf game, and shortly after NBC cameras turned on Saturday afternoon, he proved Thomas’ point on the short par-4 13th hole at The Ritz-Carlton, Orlando, Grande Lakes course.

Tied at 8-under par, Charlie blasted a drive from his forward tees up near the green while Thomas hit his tee shot through the dogleg-left fairway and into a bunker. Already ahead of the older members of his group, Charlie used the opportunity to talk a little trash to the Thomases by leaving a note besides JT’s ball in the sand.

Youngest competitor in the field.

In the end, it was the Thomases who got the last laugh, going on to win the event by one stroke over Vijay Singh and his son, Qass.

The Woodses proved that as long as Charlie wants to play, they’ll be in the mix. Ultimately, they finished at 20-under par, five shots back of Justin and Mike Thomas, to place 7th out of the 20 teams in the field.

"I don't think words can describe it." pic.twitter.com/2zr3pLg7ul

The elder Woods couldn’t contain his pride after the event.

“Charlie did great,” he said. “It’s just like being at Medalist. Each shot is the same. Get into your own little world and hit the shot that you see, and then just execute. We were harping on that in the entire run-up to this event, and that’s what he did. I’m just so proud of what he’s done and we did as a team.

“It was pure golf. When it comes right down to it, it’s just he and I, we get into our own world, and we did that. To have big Joe and little Joe (LaCava) on the bag, it just kept our little world exactly like we planned it. Our little world.”