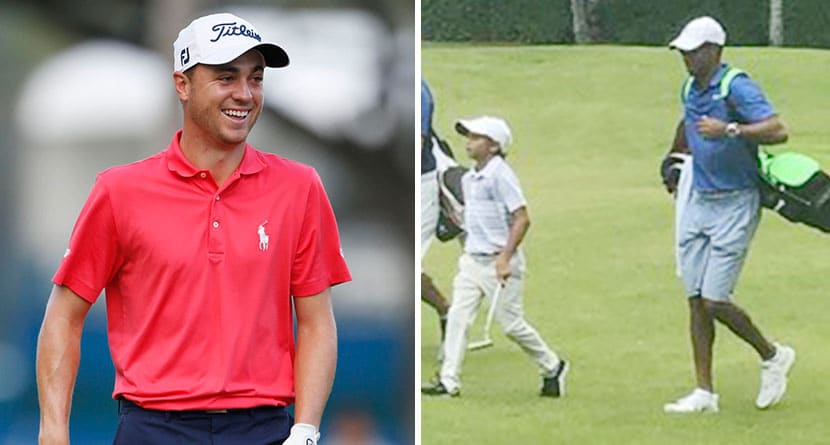 The final official event of the PGA Tour’s 2020 calendar is taking place this week in Playa del Carmen, Mexico featuring a strong field of 13 of the top-50 players in the world rankings.

Tops among those competing is Justin Thomas, the No. 3-ranked player in the world. This won’t be Thomas’ last golf tournament of the year, however, as he plans to play in the PNC Championship with his father, Mike, the week before Christmas.

While JT’s inclusion in the event would typically lead the news cycle for the sleepy family event held in Orlando each year, it’s one of Thomas’ close friends who has earned top billing: Tiger Woods who is playing alongside his son, Charlie.

The elder Woods and Thomas compete regularly on the PGA Tour, but it’s the younger Woods with whom JT has had a friendly rivalry develop over the years, as evidenced by a story Thomas told on The No Laying Up podcast last fall.

“I have a pretty good story,” Thomas said, detailing a moment in the Augusta National clubhouse as Woods was going on to win his 15th major championship. “Charlie, his little boy, he’s amazing. The apple definitely doesn’t fall far from the tree there. He’s identical to Tiger and just such a little smart aleck.

“I was like, ‘thanks man, appreciate that.’ I got a good kick out of that.”

That smack talk hasn’t slowed, either, especially as Charlie has made a name for himself in junior golf circles around South Florida and prepares for his national television debut later this month.

Charlie Woods mowed down some kids last weekend in a local US Kids Golf event in Florida. Shot 3-under 33 for 9 holes to win by 5! pic.twitter.com/d6hjL2aJWL

Asked about Tiger and Charlie on Tuesday at Mayakoba, Thomas expounded upon his decision to play in the Father-Son as well as his rivalry with Charlie.

A Thomas vs. Woods rivalry is brewing, and it doesn’t involve Tiger. @JustinThomas34 is looking forward to taking on Charlie at the @PNCChampionship. 😂 pic.twitter.com/5W5weFpOvV

“Tiger and I talked about it a bunch,” Thomas said of the PNC Championship. “He brought it up a while ago that Charlie wanted to play and Charlie really wanted to play with us. I’ve obviously gotten to know him well and he knows my dad a little bit as well.

“For some reason, Charlie just always wants to beat me, it doesn’t matter what it is. Although he’s never beaten me in golf or a putting contest, he still talks trash just like his dad. It will be fun. We’ll have that like inner tournament within a tournament, trying to shut his little mouth up, but it will be fun.”

Pairings haven’t been released for the Dec. 19-20 event, but it wouldn’t be surprising to see the Woods’ and Thomas’ paired together.

And if JT is to be believed, there better be some microphones hovering around that foursome.