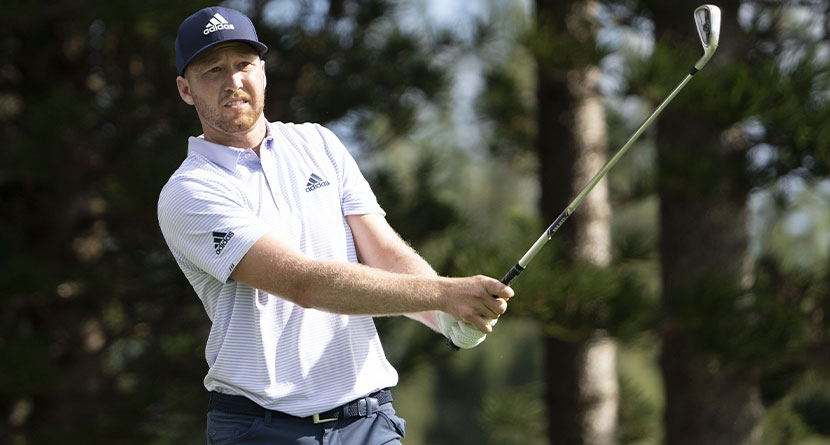 The theme of the week at the Sentry Tournament of Champions has been lost luggage. We learned of the plight of Viktor Hovland earlier this week as his triple-connecting flight from Norway to Maui hit a few snags and left him with a broken driver. But he wasn’t the only one to have baggage issues with the airlines.

Daniel Berger, who earned a spot into the field by way of his AT&T Pebble Beach Pro-Am victory, arrived in Hawaii on Sunday, but his clubs didn’t make it until Tuesday night.

Having only played in the Ryder Cup and last month’s Hero World Challenge since September, Berger was in need of some rust removal. So in between phone calls with American Airlines, Berger linked up with K.H. Lee’s caddie, Brett Waldman, who managed to make it to the island with his clubs.

Daniel Berger’s clubs got lost on the way to Hawaii. So he borrowed caddie Brett Waldman’s sticks for practice rounds. And he changed the lie and loft on all of his irons! pic.twitter.com/qxsm0ybKl5

Knowing his own specs, Berger had Waldman’s clubs bent to fit his own loft and lie numbers so that he could practice on Monday and Tuesday.

“I changed the lies and lofts on his clubs and was using his driver,” Berger said. “I just needed to hit some balls. Especially after a long flight of coming across the world to get here, I just had to get the body moving, so whatever I had was going to work.”

.@DanielBerger59 opens up with 66 at Kapalua.

Since May 1 of last year, Berger leads the @PGATOUR in strokes gained approach per round (+1.13).

And it seems to have worked pretty well. The practice sessions with borrowed clubs allowed Berger to get the work in that he needed to, and on a soft Plantation Course at Kapalua on Thursday, he fired a 7-under par 66 on the par-73 layout that was bested only by Cameron Smith’s 65.

You’ve always heard the importance of getting fit for your clubs, and this is just another example of how it can come in handy. While requiring your loft and lie specs for a rental set on vacation may not be necessary, it’s worth getting them checked out at the beginning of every season.

The wear and tear of a year’s worth of play can cause changes to your clubs that may not be noticeable to the naked eye, but can seem drastic on a lie machine. And that’s not to mention the hankering many of us get in the offseason to get some cuts in, which typically requires hitting off mats and those hard hitting surfaces can exacerbate unwanted adjustments to our clubs.

Bottom line: get fit, know your specs and get your loft and lie checked annually.