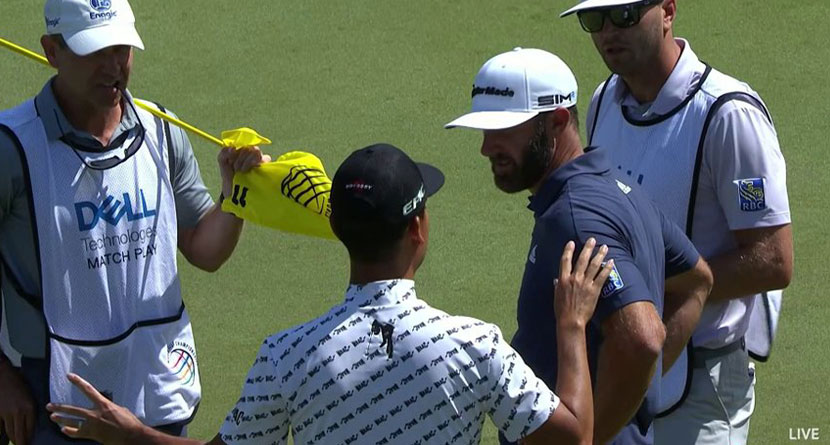 The World Golf Championships-Dell Technologies Match Play Championship always delivers drama that golf fans don’t typically get to see on a weekly basis almost exclusively because of the head-to-head nature match play brings to the table.

In years past, there was the Miguel Angel Jimenez and Keegan Bradley nose-to-nose confrontation, the Sergio Garcia-Matt Kuchar concession-gate and much more.

This year wasn’t devoid of drama either with World No. 1 Dustin Johnson and Kevin Na involved in some rules drama during their Friday match. With a potential spot in the Round of 16 on the line for Johnson, he scooped his ball off the 11th green after lipping out a birdie putt before Na conceded the putt.

Na confronted Johnson on the green to tell him that while he planned to concede the putt, DJ has to wait to get that confirmation before picking up his ball.

Kevin Na and Dustin Johnson having a discussion about conceding a putt at the #DellMatchPlay.

Seems like Na wanted to say the putt was good first, while DJ just picked it up. pic.twitter.com/iXJdZLOzOQ

“His (putt) lipped out and he had 6 inches and obviously it’s good, but I hadn’t said anything and he whacked it,” Na said after the match. “I froze there and looked at (caddie Kenny Harms) and I wasn’t going to say that’s a penalty, you’re going to lose the hole. I was going to say, you know what, that was good anyway.”

Na’s interview caught the attention of the PGA Tour Rules Committee, who upon hearing Na’s comments thought they may have to get involved because under the Rules of Golf, players are not allowed to retroactively concede putts.

“We saw Kevin’s interview and we were a little bit surprised to hear his answer because we never got clarification on exactly what was said,” said Gary Young, a Tour vice president of rules and competitions. “Two players can’t just agree that a putt was conceded afterwards.

“(Johnson) said, ‘It was a little bit breezy and I hit the putt and I started walking and I thought I heard Kevin say, That’s good.'”

Because Johnson believed he had heard a concession, there was no penalty.

While it made for an uncomfortable conversation, the two walked off the 11th green with matching pars and Johnson maintaining a 1-up lead.

Na would go on to win the following hole as well as the 17th and 18th to win the match 1-up, sending Johnson home for the weekend and allowing Robert MacIntyre to advance out of Group 1 with a 1-0-2 record.