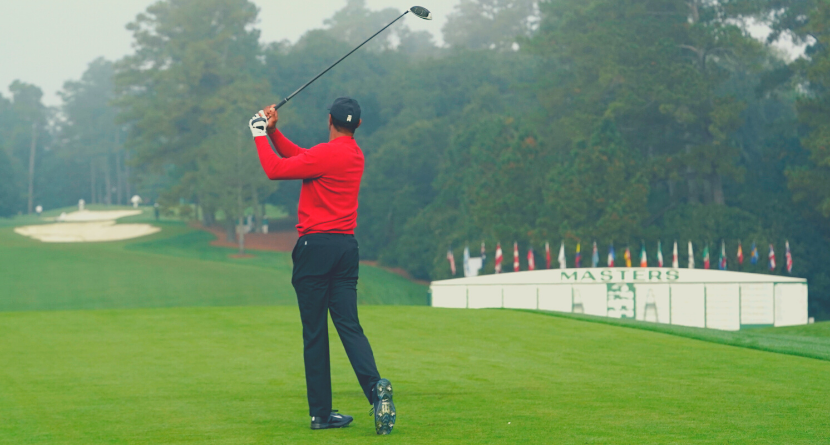 Since it was granted broadcast rights of the Masters’ first and second rounds in 2008, ESPN has gracefully handled the prestigious assignment. But the network’s roster of analysts hasn’t been shy about the effect Tiger Woods’ presence would have on this year’s proceedings.

Scott Van Pelt, who’s enjoyed one of those rare chummy media relationships with Woods dating back to his days as a Golf Channel host, painted a pretty stark picture in describing a recent interaction he had with a PGA Tour pro regarding the possibility of a Woods return next week.

“If Tiger plays, you could play nude, and no one would know you were there,” Van Pelt quipped during a segment with his Masters co-hosts, the former U.S. Open champions Curtis Strange and Andy North.

As Van Pelt and his colleagues rightly note, the key question now that Woods has reportedly played a practice round at Augusta is whether his body can sufficiently bounce back.

“Can he even get out of bed this morning?” North said. “Because it’s one thing to do it that one day, but to do it four days in a row, on this golf course – I struggled on this golf course all the time walking around, and what he’s gone through, I think it’s marvelous that he’s giving it his best effort.”

Still, the fact that it’s even a conversation some 14 months after Woods nearly lost his right leg in a horrific rollover crash is something to behold. In a subsequent appearance on Rich Eisen’s radio show, Van Pelt reaffirmed his belief in Woods’ unwavering ability to defy the odds.

“To be in this position where people are actually talking about this guy might actually play in the Masters, I think that’s amazing,” North said.

Added Strange: “He likes challenges, doesn’t he? This is certainly going to be a challenge. I look forward to it. I hope he plays. It’ll certainly be an exciting week.”