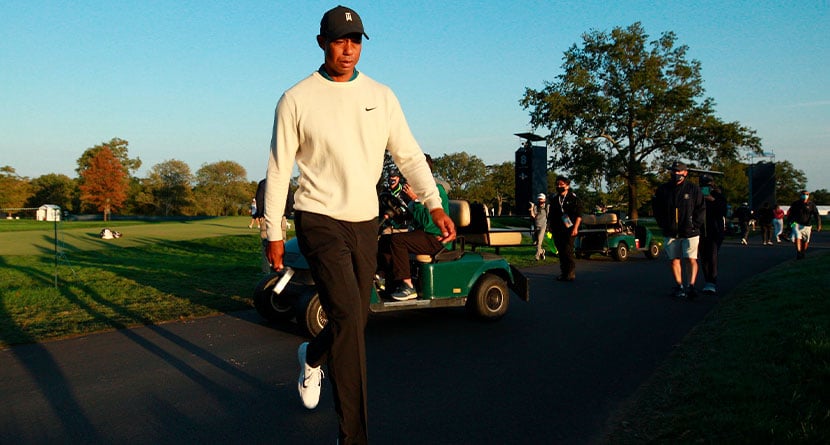 Tiger Woods continues to recover from his single-car crash and subsequent surgeries in a Los Angeles-area hospital, but after a relatively revealing and informational statement released on Tuesday night, experts from around the world have offered their opinions on Woods’ injuries and given fans a tentative understanding of the timeline and obstacles that still stand in Woods’ way to a full recovery.

The overall takeaway from the medical professionals is, first and foremost, that Woods is lucky to be alive. From there, the recovery process to simply live a normal life again will be an arduous one, and in order to play golf again at the highest level, Woods will need to avoid further deterioration and infection, the reality of which is known only to those actively treating Woods personally.

The cause of Woods’ right-leg injuries is very common, according to Dr. R. Malcolm Smith, the chief of orthopedic trauma at UMass Memorial Medical Center in Worcester, Mass. When the front end of a car is smashed, “immense force” is transmitted to the driver’s right foot and leg.

“This happens every day with car crashes in this country,” Dr. Smith said.

The multiple fractures in Woods’ tibia and fibula were repositioned using rods and pins, and typically require around months of healing to become fully functional again as weight-bearing, according to Dr. Bill Mallon, an orthopedic surgeon and former PGA Tour pro. Other experts warn this process could take closer to five and as long as 14 months should there be issues with the healing process.

While Dr. Anish Mahajan, chief medical officer and interim CEO at Harbor-UCLA Medical Center, relayed that the multiple fractures in Woods’ legs also had an impact on his muscles and tendons.

The trauma likely bleeding and swelling in his leg, threatening his muscles. Surgeons would have had to quickly cut into the layer of thick tissue covering his leg muscles to relieve the swelling. Had they not, the tissue that covers swelling muscle would have acted like a tourniquet, constricting blood flow, according to the NY Times.

Dr. Smith warned that even if doctors acted swiftly, Woods could still have lost some muscle in the time between the accident and surgery. He said that once it dies, you cannot get it back.

Given the open fractures, which mean there were wounds caused by bones breaking the skin, infection is a very big concern, Dr. John Torres, NBC News’ medical correspondent, told “Golf Today” on Wednesday.

Similarly, these wounds will have likely required a free flap to close them, which is when doctors transplant skin from the thigh or back using a microscope to carefully reconnect blood vessels from the skin transplant to the blood vessels near the wounds. The free flap, which trauma surgeons said seems likely,  will require “months and months (to heal) before he can bear weight on his leg again.”

The severity and complexity of the multiple issues tend to compound the recovery process, but the end game many golf fans are wondering about is whether or not Woods will be able to play golf again, and experts agree that the biggest obstacle to his return to the game, assuming all goes well with his legs, is the damage done to his right foot and ankle.

Dr. Reza Firoozabadi, an orthopedic trauma surgeon at Harborview Medical Center in Seattle, told the NY Times that regaining range of motion and strength can take three months to a year based on the foot and ankle injuries. Depending on the extent of those injuries, even after rehabilitation Woods may barely be able to walk.

“A very rough estimate is that there is a 70 percent chance of it healing completely,” Dr. Smith from UMass Memorial said.

Dr. Mallon said that based on what he could glean from the statement, his own medical experience as well as his time on the PGA Tour, he forecasts a recovery in the one-year range, which is in line with most other experts sharing their opinions.

(You’ll feel both smarter and dumber for reading it). https://t.co/BxHeAD0yNe

However, Dr. Mallon warned that even before this crash, Tiger had a larger hindrance, in his opinion, working against him.

“Can Tiger play golf again and if so, how long? From these injuries I suspect the answer yes, he can play golf again,” he said. “But I think the rate-limiting factor in his recovery is still his back. Golf places a lot of stress on the back. One back surgery is difficult to recover from for a pro golfer. Five back surgeries? Each one makes recovery more difficult. I still think that will be more difficult for him to recover from.”

Overall, the prognosis seems promising, considering where Tiger Woods was early Tuesday morning trapped inside his overturned vehicle on the side of the road.

“The hope going forward is that, No. 1, he can walk again, that he can walk his daughter down the aisle when she gets married, that he can do those things he wants to do to play with his family and his kids. And hopefully, the best-case scenario is that he gets back to the level of golf that he’s used to.”