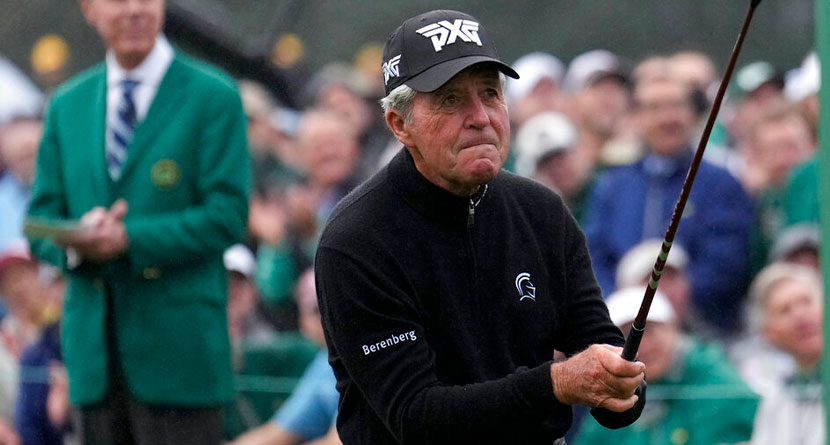 The Saudi-backed LIV Golf series is facing some serious criticisms from one of Golf Saudi’s most prominent ambassadors.

In a BBC interview this week, nine-time major champion Gary Player blasted the new breakaway series and the players who have defected from the PGA Tour.

“How can you ever be a champion playing a tour with 54 holes and no cut,” Player said. “What sort of tour is that? 54 holes, no cut, a team event nobody understands.”

Player was announced as a Golf Saudi ambassador in April of 2021, and was under heavy scrutiny after wearing the Golf Saudi logo on his collar during the Honorary Starter ceremony at this year’s Masters Tournament.

As @Coach_Mackay_ pointed out, Gary Player is rocking the Golf Saudi logo on his shirt today. pic.twitter.com/ychT7MV993

The Golf Saudi organization, just like the LIV Golf series, is financially backed by the Public Investment Fund of the Saudi Arabian government. Despite his connection to the Saudis, Player didn’t pull punches when discussing the players who have defected to the LIV series.

This was quite a change in course for Player, who supported the Saudi-backed league and the players participating as recently as June.

“This tour, which the Saudis, who by the way are our allies, let’s never forget that,” Player said to Sky Sports. “I hear a lot of detrimental things being said, but remember this, the players that are playing there now, they need the money. They’ve got families and I don’t blame them for playing there.”

After his comments about the LIV series as a whole, Player took aim at arguably the most significant LIV defector yet – Cameron Smith – along with a slight ricochet shot at Henrik Stenson.

“Will (Smith) be able to realize this great dream of being a champion? I don’t know,” Player said. “I don’t blame Stenson for going. He had no money, so he had to go. But this is a potential superstar. I think his advisors have given him the wrong advice.”

Smith will tee it up for the first time in the LIV series during this weekend’s event just outside of Boston. He was officially announced earlier this week, signing on for a reported $100 million. Joining him in the field will be five other newly-signed PGA Tour defectors: Joaquin Niemann, Marc Leishman, Harold Varner III, Anirban Lahiri, and Cameron Tringale.

Smith and Niemann had already earned a spot on the 2022 International Presidents Cup team under captain Trevor Immelman. Based on how the PGA Tour has handled previous LIV defectors, it’s likely that neither of those players will be eligible to participate in the matches at the end of this month at Quail Hollow.

Player said he wouldn’t trade any of his career success for guaranteed money.

“I wouldn’t take a billion dollars for my nine majors on both tours,” Player told BBC 5. “I worked hard. I had desire. I traveled the world. It was an education, I met wonderful people. How can you ever be a champion playing a tour with 54 holes and no cut?”

Despite that seemingly endless cash flow and the momentum of its latest signees, Player still thinks that the LIV series doesn’t have what it takes to upend the PGA Tour as the premiere league in golf. When asked about the possibility of LIV overtaking the PGA Tour, he replied simply, “No chance.”

This week’s LIV Golf event is the fourth of its inaugural eight-event season, and will be held at The International, just outside of Boston.