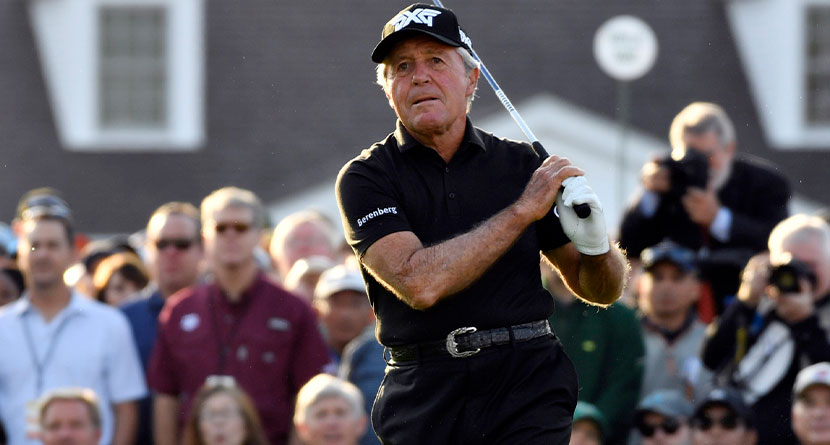 Gary Player and his son, Marc, reached an agreement in South Florida court last month that will pay the champion golfer a $5 million settlement stemming from a “contractual dispute,” the Associated Press reported.

Player, 84, is one of only five golfers to achieve the career grand slam, and the only international-born player to do so.

Marc, Player’s eldest son, is the CEO of Black Knight International, “the global holding company for The Player Group and the unique family of PLAYER, Black Knight and Gary Player® brands,” according to Marc’s LinkedIn page.

According to court documents filed in Florida, Gary Player will get $5 million and the rights to his name and likeness back from a company operated by one of his sons: https://t.co/7nS5l1SSgH pic.twitter.com/ANGh5kva1i

There were no details in the court filings about what caused the dispute, and Gary Player’s attorney, Stuart Singer, declined to give details beyond saying it was a “contractual dispute” that paid Player $5 million in royalties due to the golfer.

This isn’t the first legal run-in one of Player’s six children have had in the world of golf. In 2019, the third of Player’s children, son Wayne, was arrested following the 2018 Masters in which he was charged with deposit account fraud/bad check.

Wayne had rented a house in Evans, Georgia, about two miles from Augusta National Golf Club, for April 3-4, 2018, but when the check attempted to be cashed, it was returned for insufficient funds. He subsequently reached out to the homeowner’s lawyer saying that he would pay the $1,000, but the homeowner reported that he didn’t receive the money, resulting in the arrest.

Received the following from Gary Player’s team, regarding the arrest and fraud claims against his son Wayne during the 2018 Masters. Rest of story can be found here https://t.co/sjIY8f4SLQ pic.twitter.com/numItleHRo

Wayne was also involved in a civil suit, according to GolfDigest.com, for failing to deliver on a promotional package for the 2018 Masters.

Todd Feltz claimed he and his wife bought a $6,850 per-person package for the 2018 Masters, par-3 contest and a Gary Player meet-and-greet, but when Feltz and Player met to discuss the issues, Player became “angry and intentionally made physical contact with (Feltz) by headbutting him and knocking him to the ground,” according to reports.