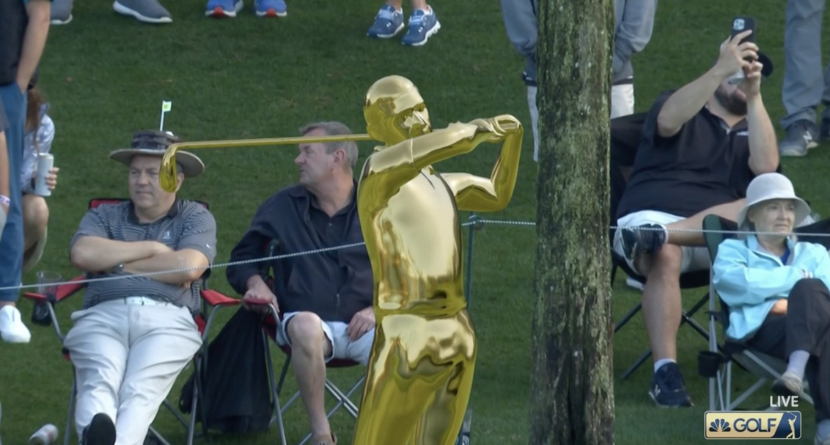 Move over, Cleatus. In the grand tradition of shoehorning strange animated characters into sports broadcasts, it seems we have a new gold standard — Gold Man.

Funny? Cute? A little of both? Nobody knows quite what to make of this little guy. But he managed to dominate the conversation in golf’s little corner of social media as we endured long gaps in Players Championship coverage over the past five days.

“He came to life, born of the physical Players Championship trophy, meant to be an amalgamation of all past champions,” said Andrew Isaacson, executive vice president of the Famous Group, which developed the project for the PGA Tour. “But over the course of this week he developed a personality of his own.”

Marketed as a “mixed reality” viewing experience, the sweet-swinging, gold-plated golfer would detach from the base of the Players Championship trophy to complete various tasks, such as squeegeeing the green and recreating iconic shots in the tournament’s history from Tiger Woods and Rickie Fowler.

I’m told the gold boy is now holding an offer from the Saudis. Incredible 24-hour rise.

Sometimes the animation was original, akin to something Pixar would render. Other times it cloaked a real golfer from existing footage, like an Instagram filter. (And if you zoned out reading that, we don’t blame you.)

Who is this guy and where did he get a gold squeegee pic.twitter.com/mqEYllCdXd

Perhaps we should leave it to golf’s actual golden boy, the newly enshrined Hall of Famer, to explain his new rival’s appeal.

“Oh, that’s funny,” Woods said tepidly when shown the Gold Man version of his iconic “better than most” putt on the 17th green at TPC Sawgrass during an interview with NBC’s Mike Tirico.

How ‘bout that, huh? 🐅 pic.twitter.com/IVhDPqm0DX

Something tells us we haven’t heard the last of Gold Man. He’s already nabbed an apparel deal, and there’s a Twitter account dedicated to tracking his every move.

A post shared by The Shotgun Start Podcast (@shotgunstartpod)

Of course, not everybody was a fan. “Why are we spending money on this?” asked Tour pro Dylan Fritelli. “Someone needs to answer to this terrible decision.”