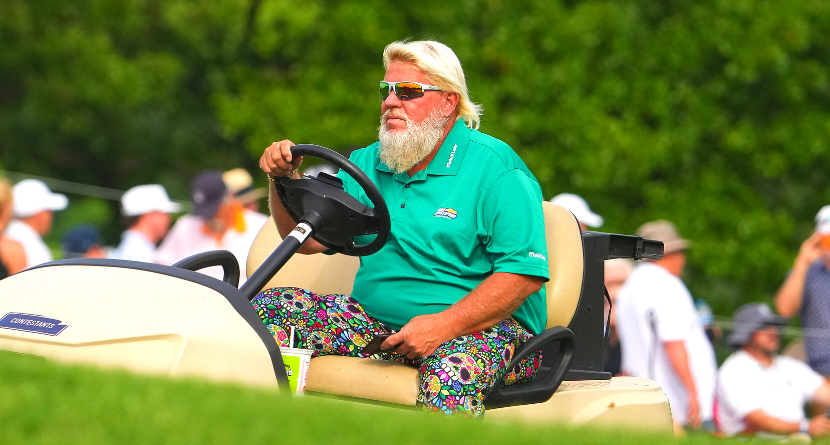 John Daly didn’t join Tiger Woods on the weekend at the PGA Championship. But he sure looked more comfortable during his stay at Southern Hills.

The 1991 PGA champ has a medical exemption that allows him to cruise along in a golf cart as he competes for golf’s gaudiest prizes. Conversely, Woods’ pain was evident as he gutted out the first three rounds on his surgically repaired right leg before withdrawing Saturday night — marking the first time he ever dropped out of a major after it started.

Should Woods follow Daly’s lead? Long John seems to think it would give the 15-time major champion a better chance at adding to his collection.

“I guarantee you that if Tiger used a cart this week, he’d be on the leaderboard,” Daly told reporters at the event.

Ironically, Woods once needled Daly over his cart use. “As far as JD taking a cart, well, I walked with a broken leg, so…,” Woods said on the eve of the 2019 PGA Championship, referring to his awe-inspiring triumph at the 2008 U.S. Open.

Daly insists that were no hard feelings between the two and that Woods later made amends after he was informed of the full scope of the two-time major champ’s ailments.

“He apologized to me at dinner the other night,” Daly said at the time. “I mean, he’s fine. I love Tiger.”

Both men rode in carts when they were paired together at last December’s PNC Championship. And with their sons at their side, Daly and Woods turned in strong performances in the spirited exhibition.

Team Daly came away with the championship belts. But Team Woods stole the show.