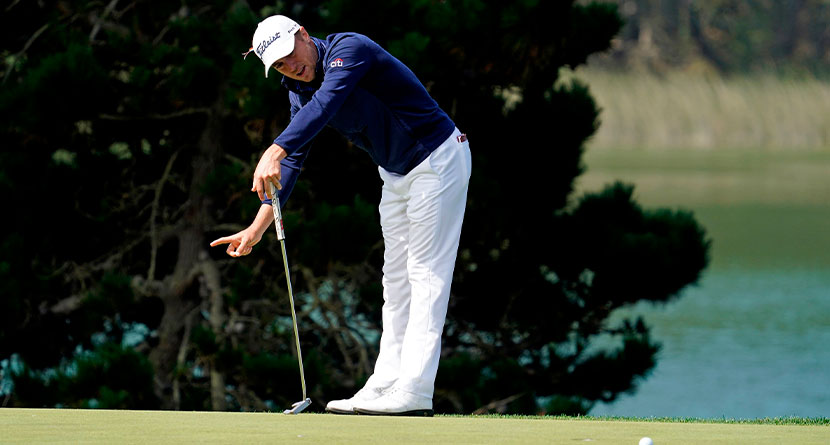 One of the coolest parts about golf’s return from the pandemic-induced break is that without fans on the premises at tournaments, television microphones are better suited for picking up natural sound from the golf course.

While crisper bird songs are nice, the real pleasure for the golf fan comes from being able to listen in on players and caddies work through different shot decisions and hear honest, real-time reactions from the players that we haven’t been able to before.

Of course, with that increased exposure to hot microphones, there’s bound to be some slip-ups, which, depending on who you’re asking, has even further endeared lesser-known players to a wider golf audience.

Even pre-pandemic, a hot mic at the first tournament of 2020 caught Patrick Cantlay relaying a story from the 2019 Open Championship to playing partner Jon Rahm when he could be heard on the broadcast saying, “He waited his whole life to be like… I’ve been waiting for this weather for 40 years. These pampered f–ks need to play.”

Cantlay was widely praised on social media at the time for showing some personality and being relatable to the common golf fan.

Similarly, two weeks at the WGC-FedEx St. Jude Invitational, Joel Dahmen, the 59th-ranked player in the world, was picked up on a par-3 tee box spewing a profanity-laced self-flagellation as a result of him bailing out on a tough shot.

And again this past week during the final round of  PGA Championship, Justin Thomas became the latest to be done in by a greenside hot mic when he missed a putt that he believed — if you’re taking context clues from his reaction — he should have made.

As the current World No. 1 during the event, Thomas was taken to task by some for his salty language, but no one apparently took more umbrage with the verbiage than USA Today / Golfweek’s Craig Dolch.

Dolch spent 800 words admonishing Thomas for his outburst and imploring the PGA Tour to make a bigger deal out of such slip-ups to cut down on their occurrences.

“But Sunday’s final round of the PGA Championship once again showed the Jupiter resident has a problem – his competitive drive is so strong that when he becomes frustrated on the golf course, he starts dropping F-bombs,” Dolch wrote. “And that problem is a bigger problem these days with all the hot mics sitting around spectator-less courses on the PGA Tour. During ESPN’s telecast, Thomas dropped the F-bomb when a birdie putt slid by the cup on the fifth hole. He said it loudly.”

Dolch used the tired defense of “children are watching,” which while a valid concern has a few simple alternatives: don’t watch, watch on mute or simply talk to your children when they hear off-color language on the broadcast.

Sure, would it be better for the network coverage to not have profanity coming through the television screens on a weekly basis? Surely the network execs would think so, but it also gives the game, and the players who play it at the highest level, a more relatable and humanizing side that can change the perception around a product that is all too often painted as robotic millionaires chasing a ball around.

The PGA Tour is an entertainment product meant to entertain people of a certain age in order to make money. The more characters, the more personality and the more fire burning during these tense moments are a part of the entertainment value, which in the long run, will greatly outweigh little Tommy or Susie hearing the golf man on the TV say a bad word.