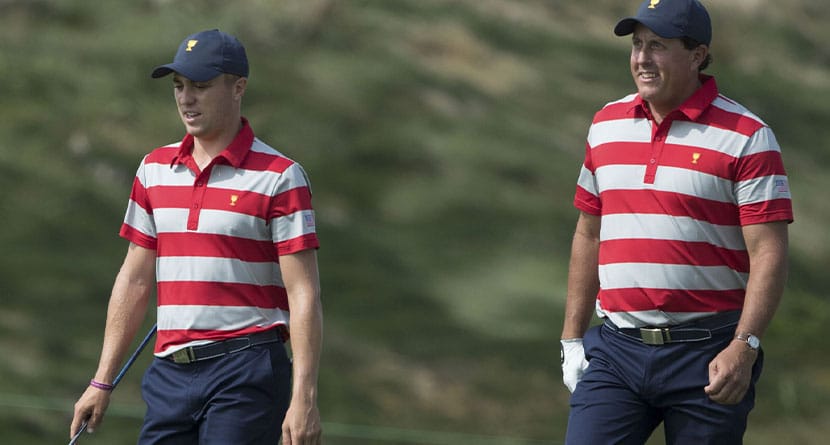 Phil Mickelson will not be competing on a U.S. international competition team in a few weeks at Whistling Straits for the first time since the early 1990s, but until yesterday’s captain’s picks were officially announced, there was still a sliver of a chance that the 2021 PGA Champion would get a spot on the squad.

While Mickelson himself seemed to have been resolved to his fate ahead of the FedEx Cup Playoff finale, even tweeting out his acceptance of an assistant captan’s role, Justin Thomas decided to prank a group of golf fans any way during a U.S. team dinner at the Ritz-Carlton in downtown Atlanta during the Tour Championship.

Thomas relayed the story on Tuesday during an appearance “Gravy and the Sleeze” on SiriusXM to co-hosts Colt Knost and Drew Stoltz where an unsuspecting group of golf fans were purposely privy to a piece of “inside information.”

As JT tells the story, he was flanked by Collin Morikawa and Bryson DeChambeau heading out of dinner when a small group of golf fans waiting on a table at a hotel restaurant recognized them and wished them luck in the Tour Championship.

Thomas told Morikawa and DeChambeau to “watch this,” and proceeded to make a proclamation within earshot of the fans.

“I can’t believe we’re picking Phil! What do you guys think about that?” Thomas relayed.

“Me being just someone who always has to just mess with people, I couldn’t help myself. I said it loud enough for them to hear … and all six of them turned around and looked at us, and I’m like, I really hope that that’s on the internet by tomorrow. I couldn’t help it; it was just sitting on a tee for me and I couldn’t let it go.”

Whether or not the small group of fans spread their findings amongst friends and family, the “inside information” Thomas pranked them with was debunked a week later when Captain Stricker announced his six captain’s picks as Tony Finau, Xander Schauffele, Jordan Spieth, Harris English, Daniel Berger and Scottie Scheffler.

I’m humbled and honored to be a part of this years Ryder Cup as an assistant captain. Thank you Captain Stricker for including me and I hope to help in any way possible. GoUSA 🇺🇸

Mickelson will join Fred Couples, Jim Furyk, Davis Love III and Zach Johnson as assistant captains during the matches, which kick off on Friday, Sept. 24.