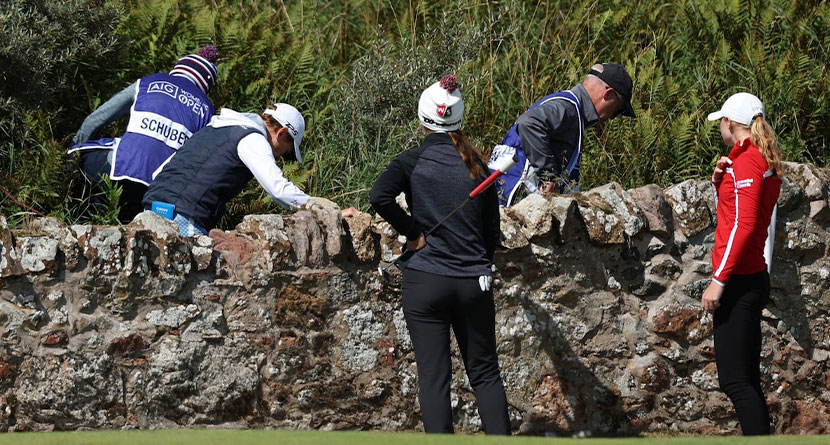 Louise Duncan made headlines at last year’s AIG Women’s Open at Carnoustie. Playing as an amateur, Duncan entered the final day very much in contention before settling for a top 10 finish.

Back at the Women’s Open as a professional this year, it was a bizarre mix-up by her caddie that made headlines this time around.

On the second hole of their second round, Duncan’s playing partner Sophia Schubert handed her ball to Duncan’s caddie and mentor, Dean Robertson. Thinking Schubert was looking to discard the ball, Robertson tossed it over his shoulder and into the nettles to the left of the second green.

It turns out that Schubert was hoping to have Robertson clean her ball, and she was now facing a possible penalty if the ball couldn’t be found.

Robertson realized his mistake, and quickly climbed the wall and got down on his hands and knees to find the ball in the stinging nettles.

He was able to find it, and Schubert avoided any penalty due to the mishap. After the round, Duncan said she’d never seen anything like that happen.

“I was like, ‘Oh no, Dean, tell me you haven’t just done that?’” Duncan said. “But it was an honest mistake and quite funny. He is always telling me to stop being an idiot and to calm down, so maybe he deserved that one.”

While Schubert would go on to miss the cut, Duncan put together another strong performance at the AIG Women’s Open in only her second professional start.

Robertson, 52, is a former European Tour winner and was a major contributor to Duncan’s solid weekend. His ability to keep Duncan under control during a crucial stretch on Friday allowed the Scot to right the ship after three straight bogeys on her front nine. She played her last 10 holes in even par and got herself into the weekend.

Duncan fired a final round 69 on Sunday to finish the tournament at 1-under-par, nine shots out of the playoff between Ashleigh Buhai and In Gee Chun. Buhai beat Chun on the fourth playoff hole to claim her first major title.

Duncan finished in a tie for 19th, and this year was able to cash in on that performance. After having to pass on accepting more than $80,000 in prize money due to her amateur status in 2021, Duncan collected $83,350 for her top-20 showing this year.

Perhaps that money will mean a big trip for her marriage to partner Jordan Hughes.

“If it’s a big, big check we’ll go abroad and get it over with,” Duncan said on Friday. “Oh, if that comes across badly, I mean it in the nicest way possible. Sorry, Jordan.”