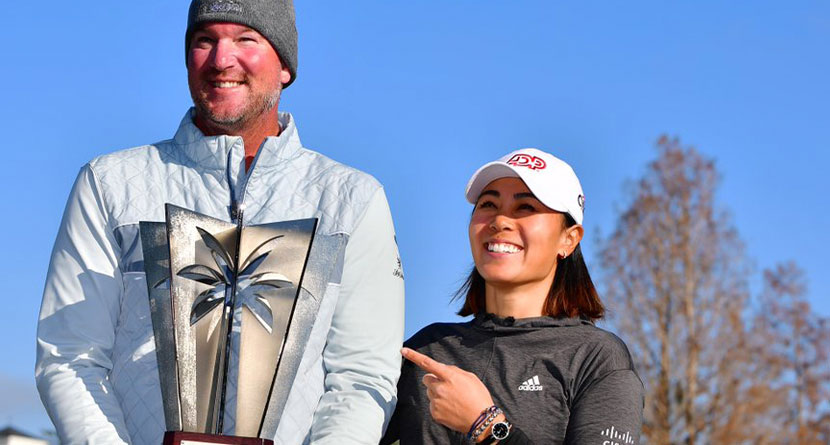 For as long as the professional game has been around, the topic of grille room debates and more recently, online arguments, has been just how good are the pros? And while there have been plenty of examples of pros proving just how good they are, the LPGA Tour still fights against a stigma that their male counterparts have seemingly put to rest.

Perhaps its because the best female players in the world hit shots that are more relatable to the average male player in terms of distance and club selection. But maybe what took place this week at the Hilton Vacations Tournament of Champions will finally force some doubters to think twice before claiming “anyone with a 4-handicap would likely shoot mid-60s from forward tees.”.

Playing alongside the best LPGA Tour players in the world, a handful of low-handicap former professional athletes got absolutely waxed. Golf Channel’s Tom Abbott laid it out as plainly as possible: playing alongside the LPGA pros on the same course, from the same tees, the outcomes weren’t even close.

Ever wondered how you would fare in an @LPGA event? Celebs are playing stableford this week from the same tees but…

Abbott made his point through three rounds, but they were exacerbated after the fourth and final round. Here were the very best ams in the field:

For comparison’s sake, Danielle Kang fired all four rounds in the 60s and won the event at 16-under par. Lowe, who won the celebrity portion of the event, would have finished tied for 24th in the 30-person field.

While Lowe’s play should be lauded, even he is willing to admit the pros, when they’re on their game, are on a completely different level.

Let this be a case study for all future grille room arguments. Single-digit handicap golfers are good! Kudos to those of you who have crossed the scratch barrier — awesome work! You’re still a long way from competing with pros on any major circuit. And that’s okay.