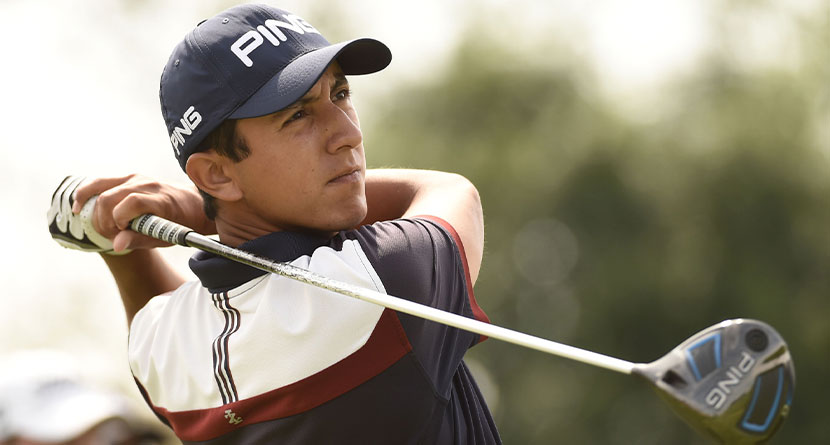 Status is everything in professional golf, and we’re not talking about how you’re perceived in public.

Your Tour card status directly correlates to how many starts you get on a given circuit, which is the driver of basically every financial aspect of a pro’s career from on-course earnings to ancillary benefits such as sponsorship deals and endorsement contracts.

Last week at Korn Ferry Tour Qualifying School, everyone who made it to the Final Stage was guaranteed a Tour card — no small feat in itself — but for those who wanted guaranteed starts, playing well over the four-day tournament was paramount as only one player would earn fully exempt status, while 39 others (plus ties) would lock up tee times in either eight or 12 events depending upon their finishing position.

One such player who wasn’t contending to win, but was looking to earn a few guaranteed starts was Mark Anguiano, a 29-year-old Californian who has bounced around the KFT and the PGA Tour Latinoamerica.

Anguiano entered the final round of Q-School at 3-under par and in a good position to grab eight guaranteed starts in 2022 with a solid round. Needing to shoot somewhere around par, Anguiano nearly put a big number on the card when a tee shot flirted with the out-of-bounds line.

Just like the rules officials did with Danny Willett a few weeks ago in Bermuda on the PGA Tour, they ran a string between OB stakes to determine if the ball was in or out of bounds. And like Willett, Anguiano’s ball was ruled to be out of bounds by a few inches.

As Anguiano, picked his ball up to return to the tee to play hit third shot, his caddie stepped in, as detailed by the Firepit Collective’s Ryan French.

Yesterday he hits it right. They get to the ball and are not sure if it’s OB or not. They call rules official and he runs a string. The ball is out by 2 inches. Mark picks up the ball and heads

not an OB stake (they think maybe a homeowner added it to keep people out of his yard) Because it was a rules official mistake Anguiano was able to replace the ball without penalty and made par. He got guaranteed starts by 1 stroke. A HUGE catch by his caddie.

As a result of the caddie’s observation, he saved his man at least one stroke and potentially three or more, which proved to be extremely valuable to Anguiano.

He finished the round with a 1-over par 72 to post 2-under par, which was good enough for a T29 and eight guaranteed starts. Two strokes worse and Anguiano would have been on the outside looking in at the KFT schedule with conditional status.

After French’s report gained some traction, Anguiano took to Twitter to offer some love for his looper.

If you’re interested in more about Anguiano and his story, French ironically had the pro on his podcast the week before Final Stage to talk about his journey to conditional status.

I’ve called Mark Anguiano the best player without status for a couple years, I can’t do that anymore. We talk about that, the perspective he gained during covid, and 👇 story.
AGM sponsored by @GoodWalkCoffee
A: https://t.co/KEQBVCUUjI
S: https://t.co/mCb6Dzi5XG pic.twitter.com/mLKcVKCLpd