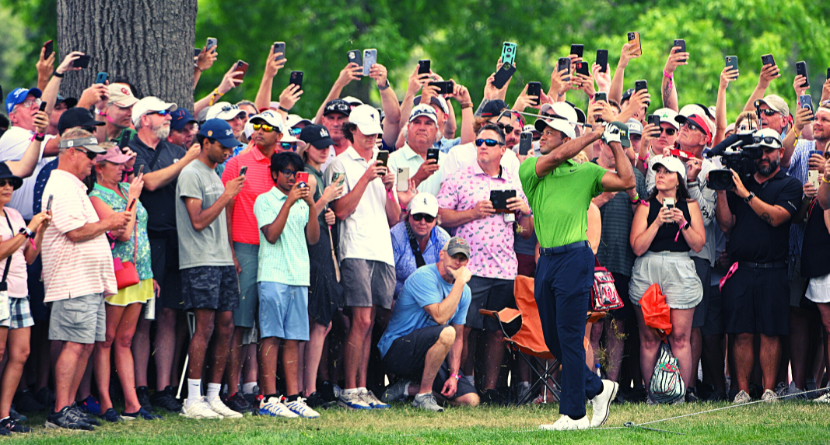 It’s a question every fan must face at sporting events in the smartphone age: to record or not to record?

The dilemma gets even tougher when a spectator is in the presence of true greatness, and that’s what made one man stand out in a sea of amateur photojournalists who had trained their phones, but not necessarily their eyeballs, on Tiger Woods as he played a shot in the PGA Championship.

By now you’ve likely seen the viral image. Woods, wearing a lime-green shirt, follows through on a mighty lash from the rough. And only one face in the gallery behind him appears to be tracking the ball.

The man also happens to be clutching an $18 Michelob Ultra — the same beer that made headlines earlier in the week when the exorbitant concession prices at Southern Hills were made public. And just as Nike pounced on Woods’ famous’ slow-rolling chip-in at the Masters, it didn’t take long for the brand to seize on a slam-dunk marketing opportunity.

Joy is living in the moment. Take it from @TheMichUltraGuy…Drop a 🍺 if you agree. pic.twitter.com/VHIcRD3Siq

Meet “Michelob Mark,” star of a new ad campaign from Michelob Ultra urging fans to “live in the moment.”

In a clever, 15-second spot that surfaced on social media Tuesday, triumphant orchestral music plays as the video pans away from Woods, whose figure is blurred in the foreground, and focuses on our man Mark watching intently.

“Some legends play in the moment,” reads the text overlay. “Some live in it.”

We found #TheMichelobGuy. As you can imagine, Mark was hard to reach. He proved it’s only worth it if you enjoy it, so we immortalized him with some merch. Grab a tee and rock it at the next golf event for a chance to win some free ULTRA. pic.twitter.com/bfZRo0aQ1w

Then comes the big reveal for a tagline that could apply to beer, golf or just about any other joy in life from which we’ve managed to distract ourselves through our devotion to devices.

“It’s only worth it if you enjoy it,” the text reads.

Naturally, you can now follow Mark on social media and purchase gear bearing his likeness. And don’t be surprised if he graces the next overpriced tallboy you purchase at a PGA Tour event.

Hey @MichelobULTRA how many likes or RTs to make these limited edition cans? pic.twitter.com/jZfuWwnguc