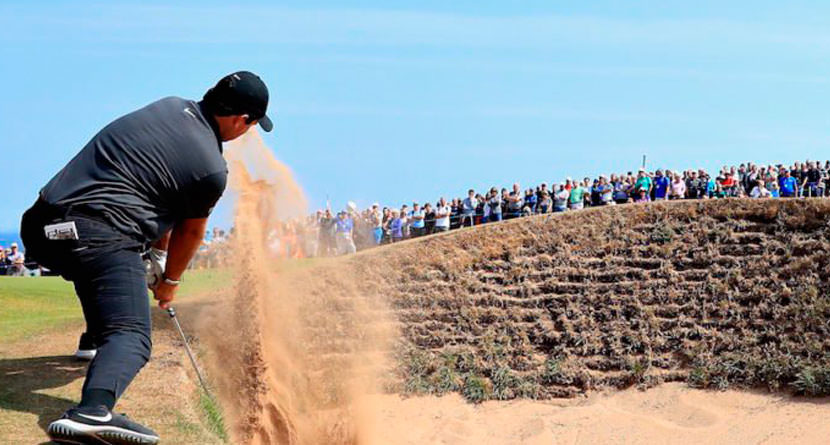 Reed Takes 3 Shots To Get Out Of Pot Bunker

Patrick Reed is playing well at the Scottish Open, but when he reached the 12th hole of his second round at 9-under par and tied for the lead, an errant tee shot found one of the small yet treacherous pot bunkers at Gullane Golf Club.

Even worse, the ball had come to rest nestled in the sand and directly up against the face of the bunker.  The contour sod wall and depth of the bunker made it nearly impossible for Reed to go left, right, straight out or even backward. He and his caddie discussed the options and he decided the conventional route towards the flag was their best option. The ball slammed into the face of the bunker, shot backward and left — and again, the ball nestled near the edge of the bunker.

Reed had to play his next shot from outside the bunker. With an extremely wide stance and lowering his center of gravity the best he could to reach down to the ball, he made another swing.  Unfortunately, the ball remained in the bunker, this time near the front right up against the bunker face, very near where his first bunker shot was played from.

On his third attempt, there was a little more space between the ball and the bunker wall, but the lie was still a factor.  Again, for the third time, Patrick faced a lie where the ball was resting below the surface level of the sand.  So how did he manage to get out on the third try?

The final lie that Patrick faced allowed him to gouge the ball out with an aggressive swing.

The keys to making this shot work and allowing him to complete a “good” double bogey started with his setup.  He had his right foot dug in slightly more to set his spine tilt and shoulders at an angle that would produce a high rising blast, escaping the tall, revetted face of the bunker.

He played the shot with a slightly open face on a lofted sand wedge. Opening the face helped him create more loft to take even more measures to clear the bunker.

Finally, he swung as hard at this shot as he does many of his drives off the tee.  The speed is needed to move the sand and then, in turn, propel the sand to lift the ball.  The more speed he can create, the higher and further he can expect the shot to travel. Swinging this aggressively and taking a large amount of sand will result in a moderate follow through.

Finally, don’t give up. It took the Masters Champion three tries to escape this hazard.  Maybe go easier on yourself when you find trouble in the bunkers and take the frustration out on the sand.