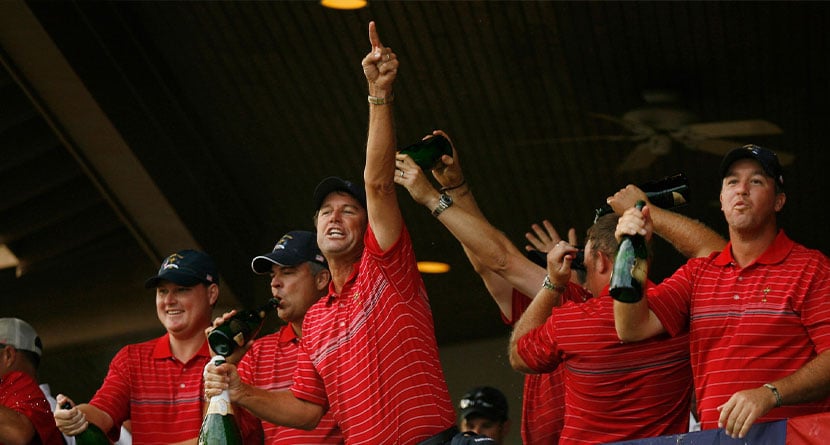 As a golf analyst for NBC, Paul Azinger gets paid to opine on the sport.

But as a former Ryder Cup stalwart and winning captain, his feelings on the Ryder Cup carry a little more weight when talking about the biennial competition.

On the call next week from Whistling Straits, Azinger will call his first U.S. home Ryder Cup from the broadcast booth, an opportunity that will allow fans to get real-time musings from one of the best United States captains of the past two decades — although it’s not a lengthy list given the U.S. has only won twice in the 21st century.

Known for his passion for the event, Azinger didn’t hold back in offering his opinion on recent revelations made by Brooks Koepka in a Golf Digest interview during a conference call with NBC Sports/Golf Channel.

“It’s just maybe not in my DNA, the team sports thing.”

While the comments caused a stir among American fans and media, it lit a fire under Azinger who posited that Koepka should simply not show up next week if he can’t be a contributing and positive member of Team USA.

“Brooks, when I just read that article, I’m not sure he loves the Ryder Cup that much. If he doesn’t love it, he should relinquish his spot and get people there who do love the Ryder Cup,” the 2008 winning captain said.

“Not everybody embraces it, but if you don’t love it and you’re not sold out, then I think Brooks should – especially being hurt, should consider whether or not he really wants to be there.”

Koepka, who is nursing a wrist injury sustained during the Tour Championship when he hit a tree root, was absent from the U.S. Team’s scouting trip to Whistling Straits this past weekend.

It’s not just Koepka’s injury or apparent apathy towards the event that Azinger chided during the conference call. He also pointed out the Bryson DeChambeau-sized elephant in the team room.

Paul Azinger on @nbcsports call: he read @BKoepka @golfdigest interview. Says it sounds like Brooks doesn’t love the @RyderCup and if he doesn’t “love it, he should relinquish his spot.”

“Then if you add the Bryson dynamic to that, that would be an easier decision for him. Brooks is one of the most candid, most honest guys there is, and if he’s blatantly honest with himself and doesn’t want to be there, he should come out and say it,” Azinger said.

As for whether or not Koepka will be in Wisconsin a week from today, captain Steve Stricker said that even he wasn’t sure, but he’s hopeful that the World No. 9 will tee it up.

“I’m leaving it up to him. Talking to him every other day. I’m just going to say that we’re focused on him playing. It sounds positive,” Stricker told Golfweek on this week. “He wants to be there and he’s working hard to be there. He’s rehabbing and his caddie is with him.”

The matches kick off Friday, September 24.