Former PGA Champ: Phil Was Not Missed At Champions Dinner 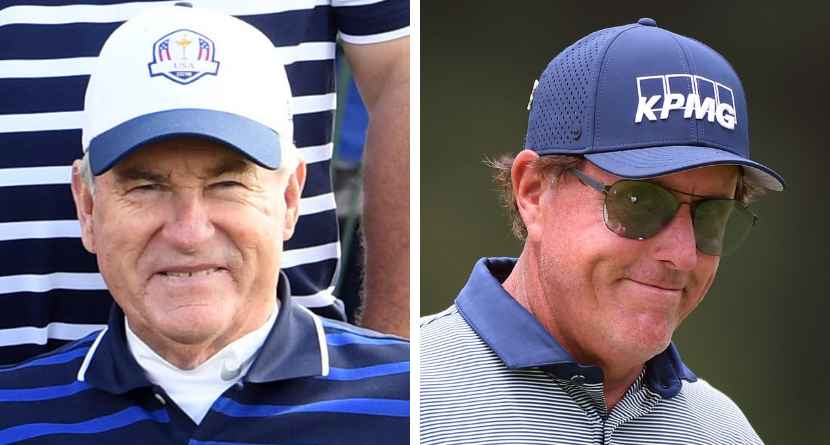 The PGA Champions Dinner might lack the prestige of its Masters counterpart. But this year’s edition benefitted from a complete lack of Phil Mickelson, according to one of the attendees.

Dave Stockton, winner of the 1970 and 1976 editions of the event, took it upon himself to assess the vibe in Lefty’s absence.

“Phil was not missed,” Stockton told Golf.com. “I think Phil would have been a big distraction [if] he was here — the story here this week is the PGA.”

Mickelson’s decision not to defend his PGA title extends a hiatus that dates back to February, when the six-time major champion stepped away to “work on the man I want to be” after blasting the PGA Tour and backing its would-be rival (now known as the LIV Golf Series).

But it turns out Mickelson was not the only no-show. Several players who are actually in the field at Southern Hills opted to skip the gathering, including Tiger Woods, Brooks Koepka, Justin Thomas and John Daly.

Stockton (gently) let those guys have it, too.

“I don’t quite understand why [more players didn’t show],” Stockton said, “because I think it’s very important for us as champions to come back. I’m assuming that at the Masters you come back — if I’d have won it I’d be there every year, and that’s what this should be.”

Of course, there’s a chance Stockton, 80, is merely playing the role of grumpy grandpa here. He said there was a stretch where hardly any of the invitees had actually held the Wanamaker trophy, and he voiced his displeasure then too.

“I remember five years ago, we’re on the East Coast playing the PGA, and I’m at the Champions Dinner,” Stockton recalled. “Davis Love is sitting at the end — there’s 20 of us at this table. He’s on the left at the far end; I’m on the right at this end. I have no idea who these 20 people are sitting between us, and I absolutely flipped out.”