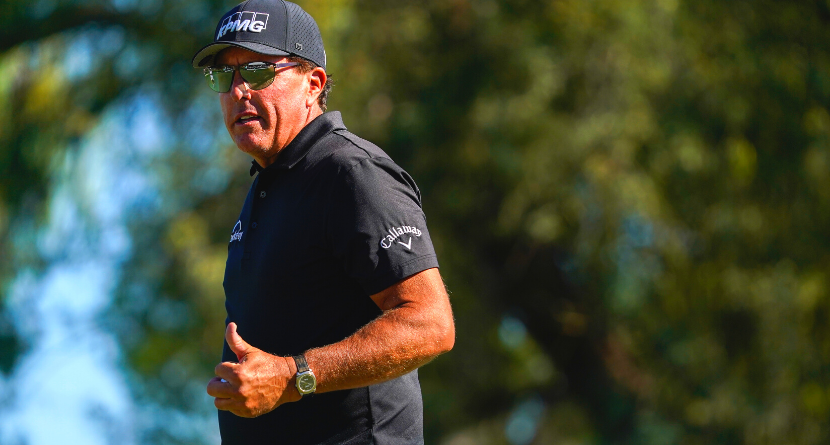 Phil Mickelson won’t defend his crown at this week’s PGA Championship, capping a tumultuous year that began last May with the 51-year-old basking in a record-breaking win at Kiawah Island.

To be clear, Mickelson’s presence — or non-presence — at future events will remain a prominent storyline. But to see a beloved, six-time major champion snuff out a soaring approval rating in roughly three months has been nothing short of stunning.

Mickelson’s decision to withdraw was finalized in the early evening on Friday, a time slot publicists usually reserve for burying bad news. The PGA of America published a brief statement via the official Twitter account for the tournament, indicating it was solely Mickelson’s call to make.

“We have just been informed that Phil Mickelson has withdrawn from the PGA Championship,” read the statement, which was posted at 5:18 p.m. “Phil is the defending champion and currently eligible to be a PGA Life Member and we would have welcomed him to participate.”

Mickelson had applied for inclusion in the field by the tournament’s late-April deadline, but his agent, Steve Loy, suggested it was a move designed to keep Lefty’s options open. Mickelson had been in contact with PGA of America Seth Waugh, who said in a podcast appearance that the tournament’s reigning champion was indeed considering whether to re-emerge from a monthslong hiatus at the season’s second major championship.

The answer, apparently, was no. Moreover, it’s quite possible that both sides decided that Mickelson’s presence at Southern Hills would introduce a kind of tabloid fervor to the press room, an atmosphere the green jackets were evidently not willing to entertain.

And so the exile continues, with Alan Shipnuck’s explosive biography due to hit shelves on Tuesday. Among the revelations to come out in excerpts was a $40 million gambling debt accrued over a four-year period last decade, providing a possible explanation for why Mickelson would be so eager to go into business with the — in his words — “scary motherf——” funding the LIV Golf Series.

Mickelson has been inactive since Feb. 6, when he finished 17th in the Saudi International. It was during that week when his feelings about the PGA Tour and commissioner Jay Monahan first became public.