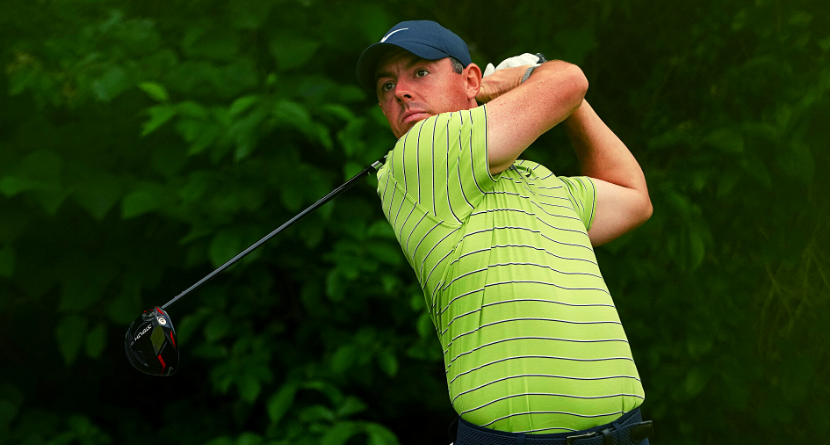 On Wednesday Rory McIlroy gave us the ultimate “perspective” moment, making a self-deprecating crack as he held his young daughter in front of a mural of the PGA Championship’s past winners.

“That’s when daddy was good,” said McIlroy, who won the PGA in 2012 and 2014 but hasn’t added to his collection of majors since that second triumph at Valhalla.

Fittingly, McIilroy looked free and easy on Thursday, tallying seven birdies and carding a 5-under-par 65 to set the early pace at Southern Hills Country Club. It was the four-time major champion’s lowest-career round at the PGA and gave him solo possession of the first-round lead.

“I’ve been playing well coming in here. I’ve been carrying some good form,” McIlroy said. “Obviously that took a lot from that last round at Augusta, played well up in D.C. at the Wells Fargo there, and played good in the practice rounds earlier this week.
“I think when your game is feeling like that, it’s just a matter of going out there and really sticking to your game plan, executing as well as you possibly can, and just sort of staying in your own little world.

Among those in close pursuit of McIlroy are Will Zalatoris and Tom Hoge, each of whom shot a 4-under-par 66. A cluster at 3-under-par 67 included Justin Thomas, Abe Ancer and Matt Kuchar.

McIlroy’s supergroup bandmates, Tiger Woods and Jordan Spieth, struggled to keep up with his blistering pace. Woods posted a 4-over-par 74 while Spieth, who is vying for the career grand slam, was two shots better. Two-time PGA champion Brooks Koepka, who missed the cut at the Masters, has work to do to make the weekend in Tulsa after posting a 5-over-par 75 on Thursday.

For a brief time Thursday, 1991 PGA champ John Daly found his name atop the leaderboard. Making his first start since he was disqualified from last week’s senior major, the Regions Tradition, for storming off the course without signing his second-round scorecard, the 56-year-old bounced back with an even-par 70.