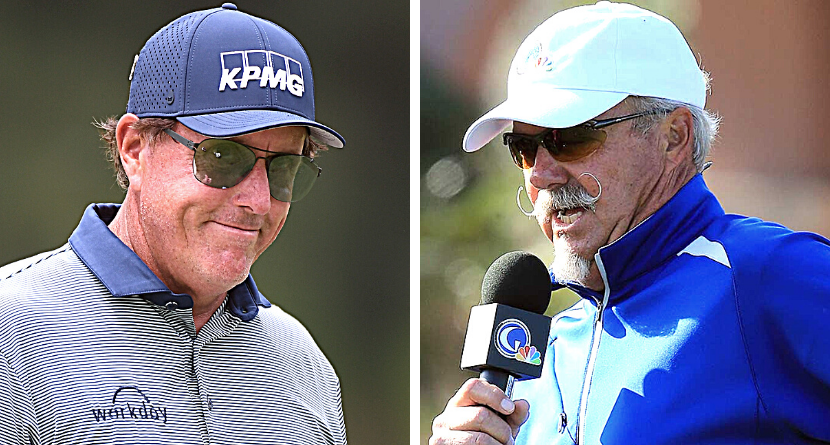 Now that Alan Shipnuck’s explosive Phil Mickelson biography is on store shelves, newsworthy anecdotes from the six-time major champion’s “rip-roaring” life are starting to make the rounds. And while readers’ mileage may vary when it comes to shock factor, it may be hard to top this doozy of a gambling tale published by GolfWRX on Wednesday.

The website highlighted a passage wherein the bewildering lengths to which Mickelson craved betting action — even during a PGA Tour round — are revealed.

“When I was in the TV tower, every time Phil got to my hole, Bones [caddie Jim Mackay] would look up at me and I would flash the odds,” former CBS commentator Gary McCord said. “If Phil had a 15-footer, I’d flash three fingers, which meant the odds were 3-1. If he was 60 feet, I’d give him 2-1 on a two-putt. Bones would go down and whisper in his ear and Phil would look up at me and shake his head, yes or no.”

McCord’s story only got juicier from there.

“I can’t tell you how many wadded-up twenties I threw out of the tower until the Tour found out about it and I got word through CBS I was no longer allowed to gamble with Phil while up in the tower,” the former pro said.

In a previous excerpt from Shipnuck’s book, court records revealed Lefty totaled $40 million in gambling losses from 2010-2014 — roughly equaling his annual income at the time.

Mickelson is sitting out his title defense at the PGA Championship this week, but there’s hardly been a reprieve from the wave of headlines that continues to trail his incendiary commentary around the LIV Golf Series and subsequent exit from the sport.