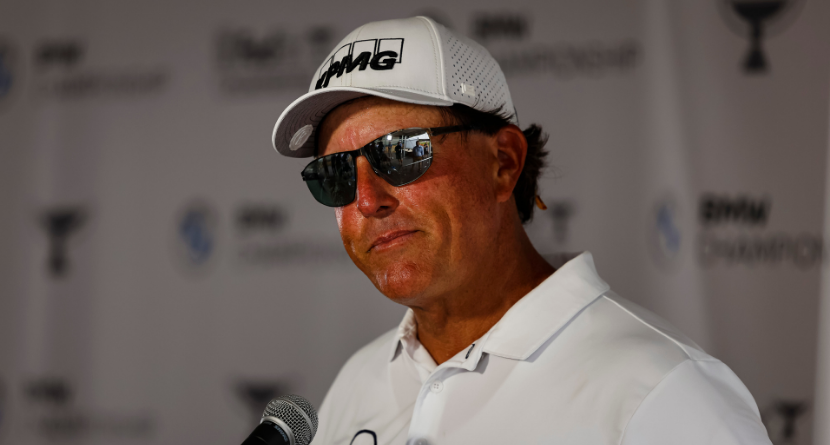 It was only a matter of time before the PGA Tour issued its own salvo in what until now has been a one-sided war of words waged by one man: the reigning champion of the PGA Championship. But it might be more accurate to refer to this first volley as a round of fact-checking rather than an act of aggression.

Indeed, it seems that beyond being genuinely puzzling and more than a little ironic, Phil Mickelson’s explosive charge that the Tour was guilty of “obnoxious greed” isn’t rooted in fact. At least not from the perspective of those with real access to the Tour’s coffers.

Golf.com on Thursday published a report in which multiple executives offered informed rebuttals to the allegations that the Tour is sitting on “$20 billion” in media assets and lording over a mountain of digital content that could — and, in Mickelson’s eyes, should — make the players considerably richer for their efforts. Told of that astronomical figure, sources were unclear on where Mickelson was getting his numbers and what exactly they were attached to. Though he did succeed in making them laugh.

If Mickelson was referring to licensing dollars associated with the Tour’s media archives, as the report’s author James Colgan posited, then he was once again way off base. As a source told Colgan, “that number certainly doesn’t start with a ‘B.'”

Additionally, Colgan obtained records that cast further doubt on Mickelson’s assertions. Here are some more takeaways from the report:

What’s Next For Mickelson?

The toothpaste has not just come out of the proverbial tube; someone stepped on the tube and squirted toothpaste across the room. Which is to say, the 51-year-old Mickelson and the Tour on which he’s amassed close to $100 million in career earnings would appear to have some major healing to do…

Unless, of course, he intends to challenge the Tour head-on by striking a lucrative deal to become the face of a breakaway league.