Mickelson Takes Flamethrower To PGA Tour For Its “Obnoxious Greed” 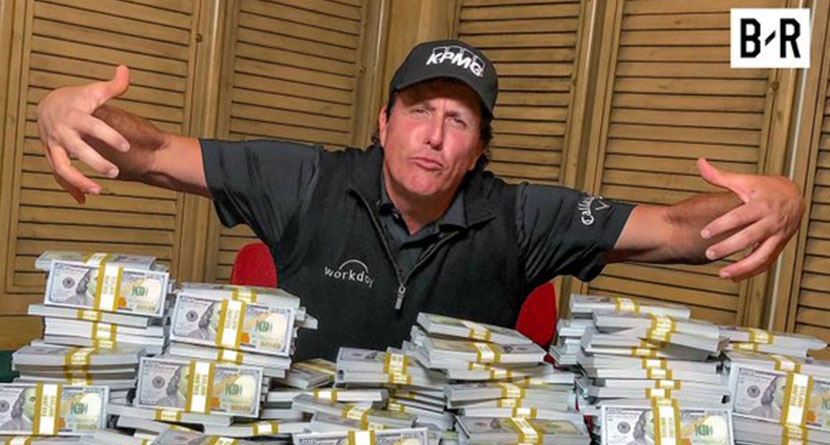 Playing this week at the Asian Tour’s Saudi International, Phil Mickelson took a flamethrower to the PGA Tour in what many are speculating could be the groundwork for Mickelson’s exit to a lucrative payday with a splinter Tour.

Like Lee Westwood and Dustin Johnson before him, Mickelson was asked at the end of his pre-tournament press conference about the possibility of the rise of a rival league, his thoughts on the overall state of the professional game and whether he’s been approached about joining a Saudi-backed Tour.

Always calculated, Mickelson spoke with John Huggan following his pre-tournament press conference, fleshing out his thoughts on the media rights issue that he sees as a large reason many players are considering splinter Tour opportunities.

“The players don’t have access to their own media. If the Tour wanted to end any threat, they could just hand back the media rights to the players. But they would rather throw $25 million here (FedEx Cup bonus) and $40 million there (PIP payouts) than give back the roughly $20 billion in digital assets they control,” Mickelson said. “There are many issues, but that is one of the biggest. For me personally, it’s not enough that they are sitting on hundreds of millions of digital moments. They also have access to my shots; access I do not have. They also charge companies to use shots I have hit. And when I did ‘The Match’ — there have been five of them — the Tour forced me to pay them $1 million each time. For my own media rights. That type of greed is, to me, beyond obnoxious.”

Mickelson went on to criticize the Tour’s “obnoxious greed” by pointing out the much-requested, yet rarely-done mic’ing up of players and caddies. “The player would not benefit,” he said, only the Tour would as they would own those rights as well.

It appears this barrier to personal brand building is Mickelson’s preferred vehicle to entertain competitive offers, whether that be from the Saudis or elsewhere. The PGA Tour declined to comment on Mickelson’s remarks on Wednesday, but previous statements reiterate that the Tour’s “business model is consistent with other professional sports leagues in that it relies on media rights to maximize revenue.”

The threat of disruptor leagues has never been more real, and with players being offered life-changing amounts of money upfront as well as the potential for more income via guaranteed money events and more lenient media rights, Mickelson’s next move doesn’t seem too difficult to forecast.