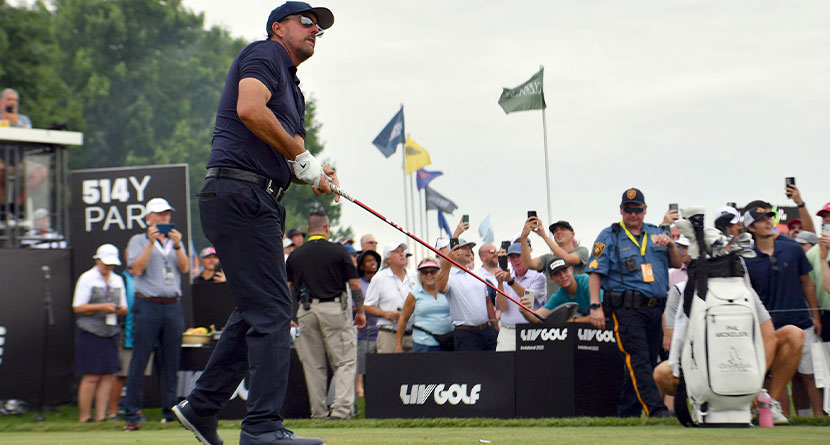 Even though his time playing on the PGA Tour might be over, Phil Mickelson’s time talking about the PGA Tour clearly is not.

In an in-depth interview with Sports Illustrated’s Morning Read, Mickelson gave his various opinions on the state of the PGA Tour and the changes that Jay Monahan & the PGA Tour have made since the emergence of LIV Golf.

The main topic was the compensation of the players and the new purses that the PGA Tour has implemented.

“Well, they are getting a lot for it,” Mickelson said about top guys playing more events. “So, I’m extremely happy that the top players are being listened to and that their input is being valued. And that those events are coming about.’’

Mickelson also was asked about the concept that he was right all along.

“I don’t think vindication is what I would say. I would say I’m generally happy that the top players who are really driving the Tour and creating the interest are being listened to. And what they are doing for the Tour is being valued now. I’m happy to see that happen.’’

Mickelson added, “I think a lot of my conversations with (former PGA Tour commissioner Tim) Finchem going back 15, 18 years even up to a year ago (with commissioner Jay Monahan) are pretty well documented. So, I probably don’t need to go into every detail. But it’s interesting some of the similarities.’’

Mickelson added that some players have even reached out to him to express their appreciation for what he did.

“Yes, numerous,” Mickelson said to whether or not guys have reached out to him. “And I’m very appreciative. They are from both sides. I think players on both sides of LIV and the PGA Tour are appreciative of what is happening. Every player is benefiting.’’

Mickelson credits LIV and “their disruption” to golf as the driving force behind the Tour’s changes.

“I really don’t know what to say about the PGA Tour and their direction and what they should or should not be doing. My commitment now is with LIV. We’ve made some major disruption to the sport of golf and have created some really unique opportunities for players and fans. And we’re just getting started.’’

Mickelson also said that the players-only meeting led by Tiger Woods and Rory McIlroy at the BMW Championship never would have happened without LIV. But not for a lack of trying.

“No, despite multiple efforts by multiple players,” Mickelson said. “No. I don’t think anything like that would have happened without the leverage that LIV Golf has provided. There was no leverage. There were no other options.’’

Back in February, Mickelson outlined in an interview with Golf Digest that his main issues with the PGA Tour were about money and media rights, along with transparency.

“It’s not public knowledge, all that goes on,” Mickelson said. “But the players don’t have access to their own media. If the tour wanted to end any threat, they could just hand back the media rights to the players. But they would rather throw $25 million here and $40 million there than give back the roughly $20 billion in digital assets they control. Or give up access to the $50-plus million they make every year on their own media channel.”

“There are many issues, but that is one of the biggest. For me personally, it’s not enough that they are sitting on hundreds of millions of digital moments. They also have access to my shots; access I do not have,” Mickelson added. “They also charge companies to use shots I have hit. And when I did ‘The Match’—there have been five of them—the tour forced me to pay them $1 million each time. For my own media rights. That type of greed is, to me, beyond obnoxious.”

With his wide-ranging interview and well-thought-out responses back in the public forum, Mickelson returned to his off-the-cuff nature during this past week’s LIV Golf Invitational Boston event, tossing some daggers in the direction of the Tour.

“I think the fans are getting a lot of benefit out of this, and all golfers, all professional golfers are getting a lot of benefit. The guys on the Tour are playing for a lot more money. It’s great that they magically found a couple hundred million; that’s awesome,” he said. “Everybody is I think in a better position now than they were a year ago.”

Mickelson finished tied for 40th in the event at +2. In four events, the six-time major champions hasn’t finished better than 34th in the 48-man fields.