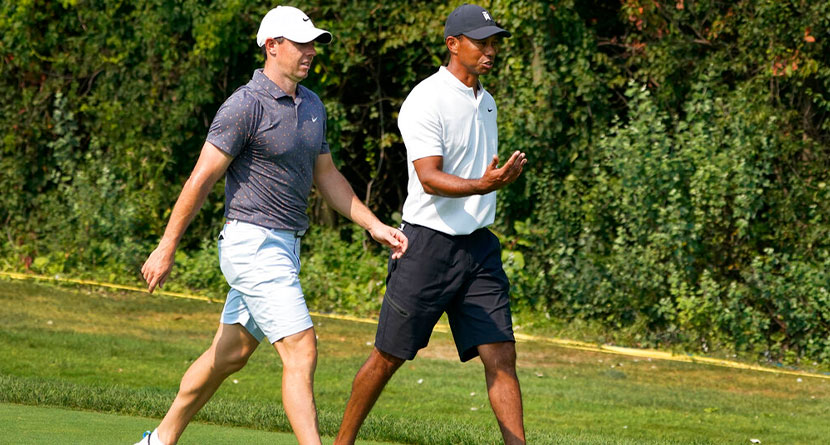 Usually when Golf Twitter starts tracking the flight plans for Tiger Woods’ private jet, there is a lot of speculation about where the 15-time major winner will be teeing it up next.

That was not the case last week when Woods and Rickie Fowler flew to Wilmington, Delaware, for a closed-door meeting with some of the PGA Tour’s top players ahead of the BMW Championship. The speculation was all about what happened in that meeting, and how it will affect the Tour’s future.

As first reported by Alan Shipnuck at The Fire Pit Collective, the players-only meeting was focused on a new vision for the PGA Tour as it continues to battle against the breakaway LIV Golf Series. That new vision could include a change to the Tour’s status as a non-profit and a new series of events for top Tour players.

The meeting took place amid rumors that LIV will announce seven new signees – perhaps including world no. 2 Cameron Smith – after the FedEx Cup Playoffs conclude this week.

Tiger Woods and Rickie Fowler touch down at Atlantic Aviation as they visit the @BMWchamps. pic.twitter.com/YK5Pnr3Suj

This was just the most recent meeting of some of the Tour’s top stars, which reportedly started at the JP McManus Pro-Am at Adare Manor back in early July. Woods and McIlroy have been leading discussions amongst the top players ever since, hoping to gather and solidify support for the PGA Tour as more players have begun defecting to the LIV series.

Details of the meeting were hard to come by, with most players adhering to a code of silence of sorts.

“Yeah, I think I’d be pretty unhappy if I saw one of those guys from (Tuesday) night just blabbering to you guys what we talked about,” Schauffele said on Wednesday. “That would be really frowned upon, and you probably wouldn’t get invited back to the meeting. Yeah, there’s a little bit of a code there, I’d say.’’

Even with the “code” in place, some details made it to the press. Sources indicate that all 23 players left the meeting in unanimous support of a new proposal that will be submitted to commissioner Jay Monahan this week.

That proposal included a series of top-tier events that would include limited fields and feature purses reportedly in the $20 million range (for comparison, the average purse size on the PGA Tour in 2022 was in the $8.9 million range).

No Laying Up reported the new series of top-tier events would include up to 15 tournaments, while The Fire Pit Collective reported there could be up to 18 events during the new January-August Tour schedule. The goal would be to have the top players in the same fields more often.

“We need to get the top guys together more often than we do,” McIlroy said ahead of last week’s BMW Championship.

The Tour would still host tournaments outside of the elevated events, with those tournaments giving players the opportunity to qualify for the upcoming top-tier events, guaranteeing that all players will have a chance to compete in the new elevated series.

The proposal also outlined that players exempt into the elevated series would still need to compete in at least three events outside of the new top-tier tournaments. Nothing in the proposal indicated which events would be elevated into this new series.

The Fire Pit Collective also reported that conversations were had about shifting the PGA Tour’s status as a non-profit, allowing it to have more freedom in how it does business. Shipnuck wrote that the change would result in the Tour paying between $20-$50 million in taxes each year, but would allow big investors and private equity firms to pump money into the Tour.

No Laying Up reported that multiple sources inside the meeting said that a Tour plan to privatize was not part of the discussions.

While conflicting reports fly and rumors swirl, McIlroy was quick to praise Woods’ willingness to engage in these conversations during the twilight of his career.

Rory McIlroy has praised Tiger Woods involvement in a meeting to address the threat of LIV Golf to the PGA Tour ⛳pic.twitter.com/gm7gE6bczY

He was also quick to acknowledge that Tiger isn’t going to be the one to carry the Tour into the future, and that the Tour needs to adapt.