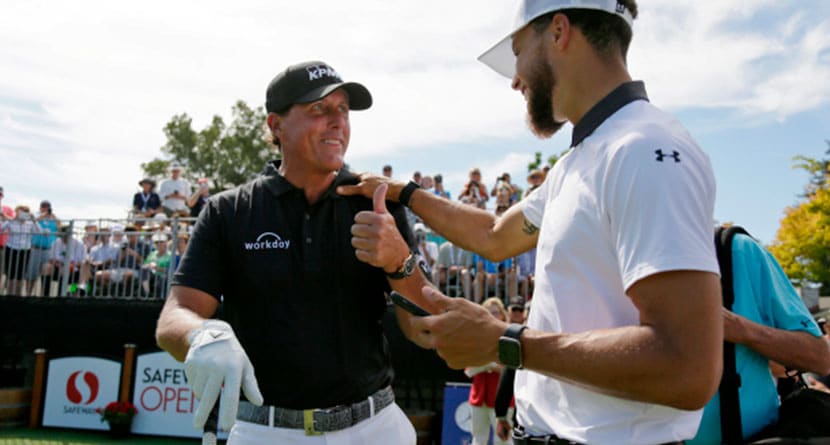 While most of the U.S.-based professional Tours are off this week because of the Thanksgiving holiday, there will be some golf on Friday worth tuning into while you recover from all the turkey you ingested the day prior: The Match III.

The third exhibition of its kind will sorely miss Tiger Woods, but Capital One’s The Match: Champions for Change will sill have Phil Mickelson involved, this time teaming up with Charles Barkley to take on Golden State Warriors star Stephen Curry and future NFL Hall of Famer Peyton Manning.

While the announcement of the event leaked out a few months back, with the event taking place later this week on Black Friday, the trash talk ratcheted up over the weekend as Mickelson, Curry and even the marketing department took turns ragging on Barkley for his lack of championship victories and his notoriously poor golf game.

The Match is just over one week away!@StephenCurry30 I try to not let logic, reason, or Chuck’s swing get in the way of my smack talk, so let me just say, you and Peyton are going to be taken down by the worst swing in golf and “that’s gonna leave a mark.” (Tommy Boy) pic.twitter.com/iTfUVCzvBp

Curry took it a step farther appearing on the No Laying Up podcast last week.

“This one’s going to be dope just because, obviously there’s Phil, there’s me, there’s Peyton, and then way down there is Chuck, so he’s going to embarrass himself for sure,” he said.” It’s just going to be mad fun to rag on him all day.”

The trash talk then took to social media where Phil didn’t so much defend his parter as he did share his belief that he wouldn’t necessarily bring him down.

While it’s easy to poke fun at Barkley’s struggles with the hitch in his swing, there have been signs of improvement thanks to some work he’s been able to do with Stan Utley.

That hasn’t stopped the trash talk from accumulating, however. It’ll be interesting which version of Barkely’s swing shows up on Friday at 3 p.m. on TNT, the one above or the one below.

Losing to this swing will be DEVASTATING 😂 https://t.co/wuiqHpQU9i