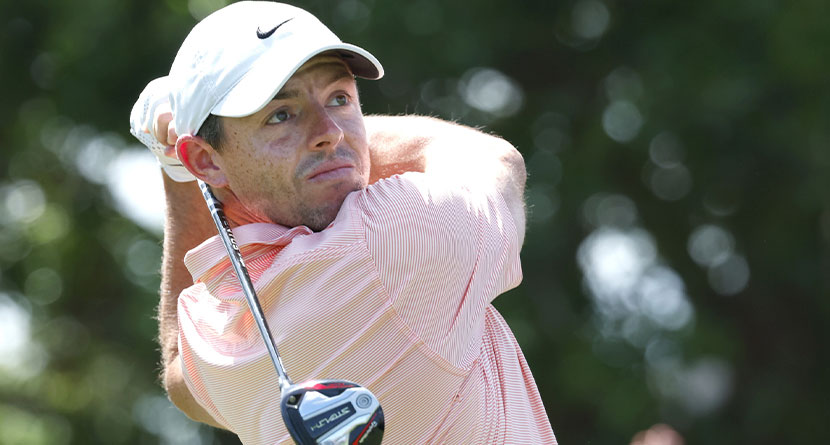 The other splinter golf circuit, the Premier Golf League, appears ready to make its move as well.

In an email addressed to Rory McIlroy obtained by The Fire Pit Collective, the PGL laid out a potentially lucrative and Saudi-free model that McIlroy has reportedly already taken to the PGA Tour Player Advisory Committee.

The PGL has slightly altered its business plan and is attempting to partner with the PGA Tour in order to get its series off the ground, unlike LIV Golf’s separate Invitational series.

Here’s the kicker for the PGL: according to their proposal, each of the 200 PGA Tour members would receive $2 million each upon launch, and Korn Ferry Tour pros would receive $300,000 upon launch via a “non-recourse loan,” based on a future equity release of $460 million.

In a recent email obtained by the Fire Pit Collective, the Premier Golf League laid out to Rory McIlroy its plan for a series of 18 lucrative events featuring $20 million purses in which the PGL would partner with the PGA Tour. Full story -> https://t.co/uXIo1IpKpV pic.twitter.com/GWBkRP4fJ2

The letter’s intent is to generate significant equity for PGA Tour, DP World Tour and Korn Ferry Tour members that vote in favor of the merger. The PGL’s proposal would allocate 100 million shares with a prospective value of $10 billion, a number the PGL believes it will reach by 2030.

PGA Tour members would receive 50% of those shares, with Korn Ferry Tour members receiving 7.5% and DP World Tour members just 2.5%. There are other allocations for Commercial Partners, the World Golf Group and the PGA Foundation and Directors.

While there are definitely skeptics, among them Kevin Kisner, a player director on the Tour’s PAC, who went on the record with FPC.

“Their proposal has been studied and scrutinized by an independent company to test its viability,” Kisner said. “The results were presented to all of us: Not feasible.”

Of course, the PGL disagrees.

The biggest questions remaining pertain to the financial viability of the World Golf Group and PGL as well as the players’ general appetite to enter back into the matrix of what-ifs. While there is undoubtedly fatigue surrounding the idea of breakaway tours, $460 million in player signing bonuses will make the PGL letter something that gets a lot of players’ and executives’ attention.

You can read the full email from the PGL to McIlroy below. 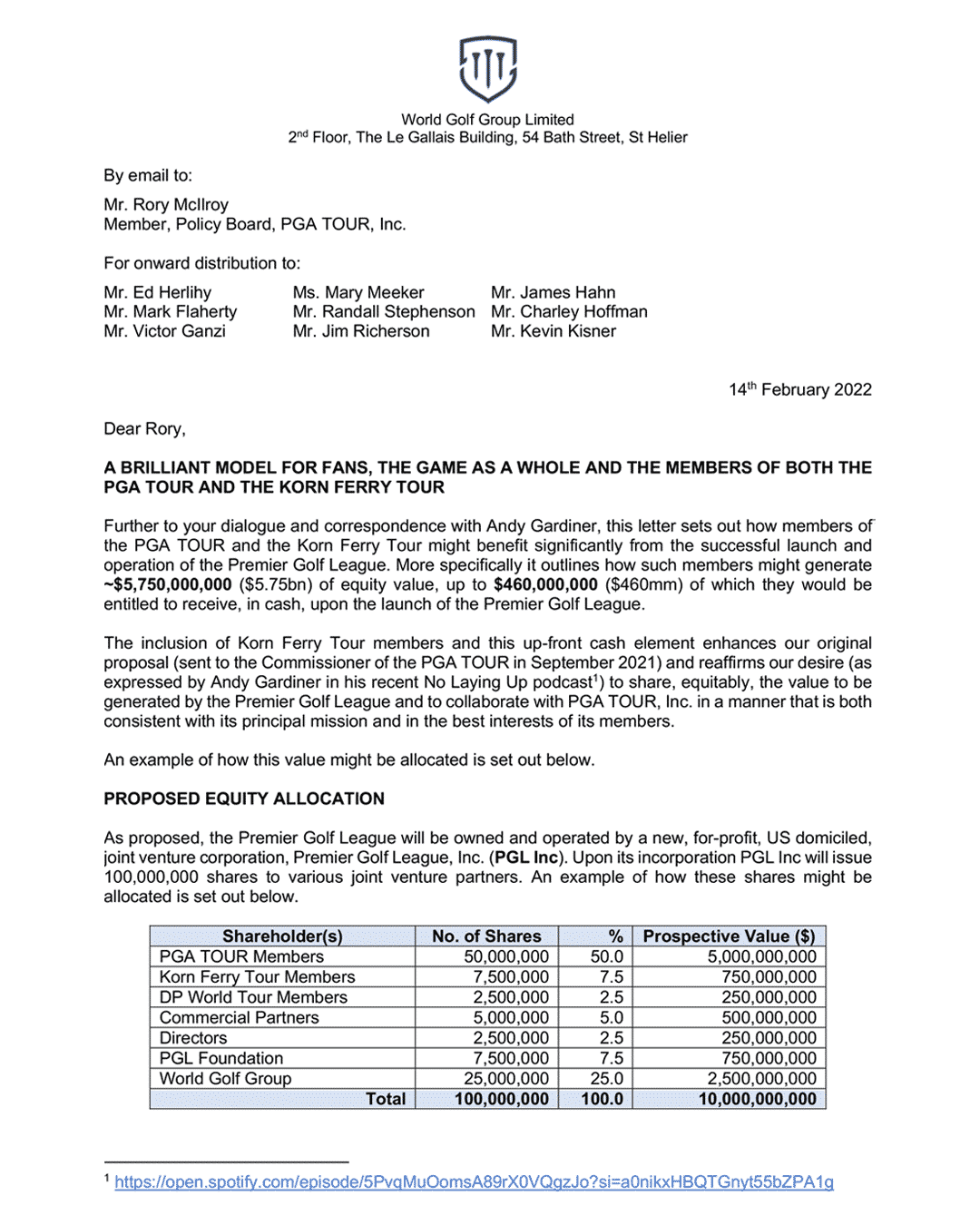 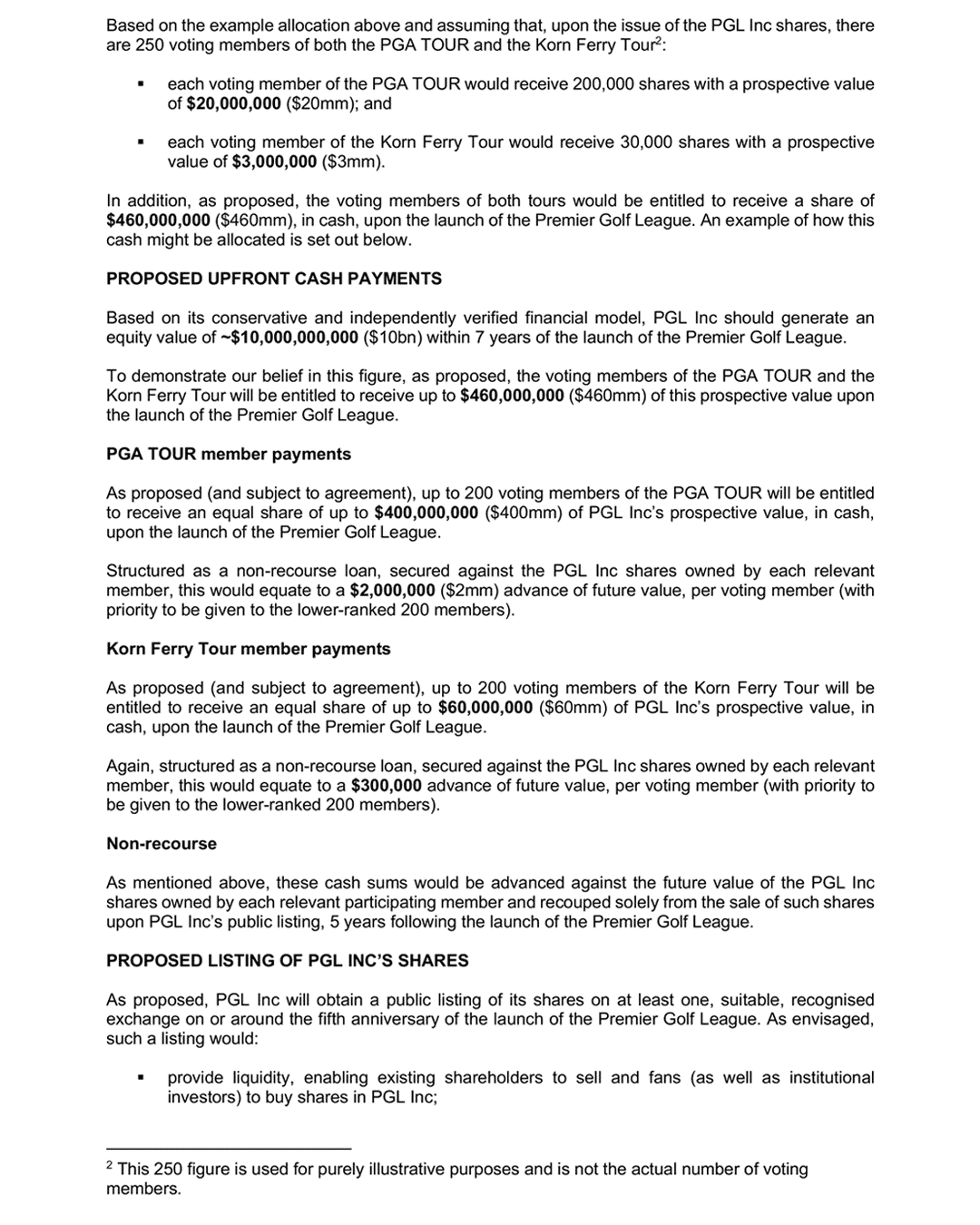 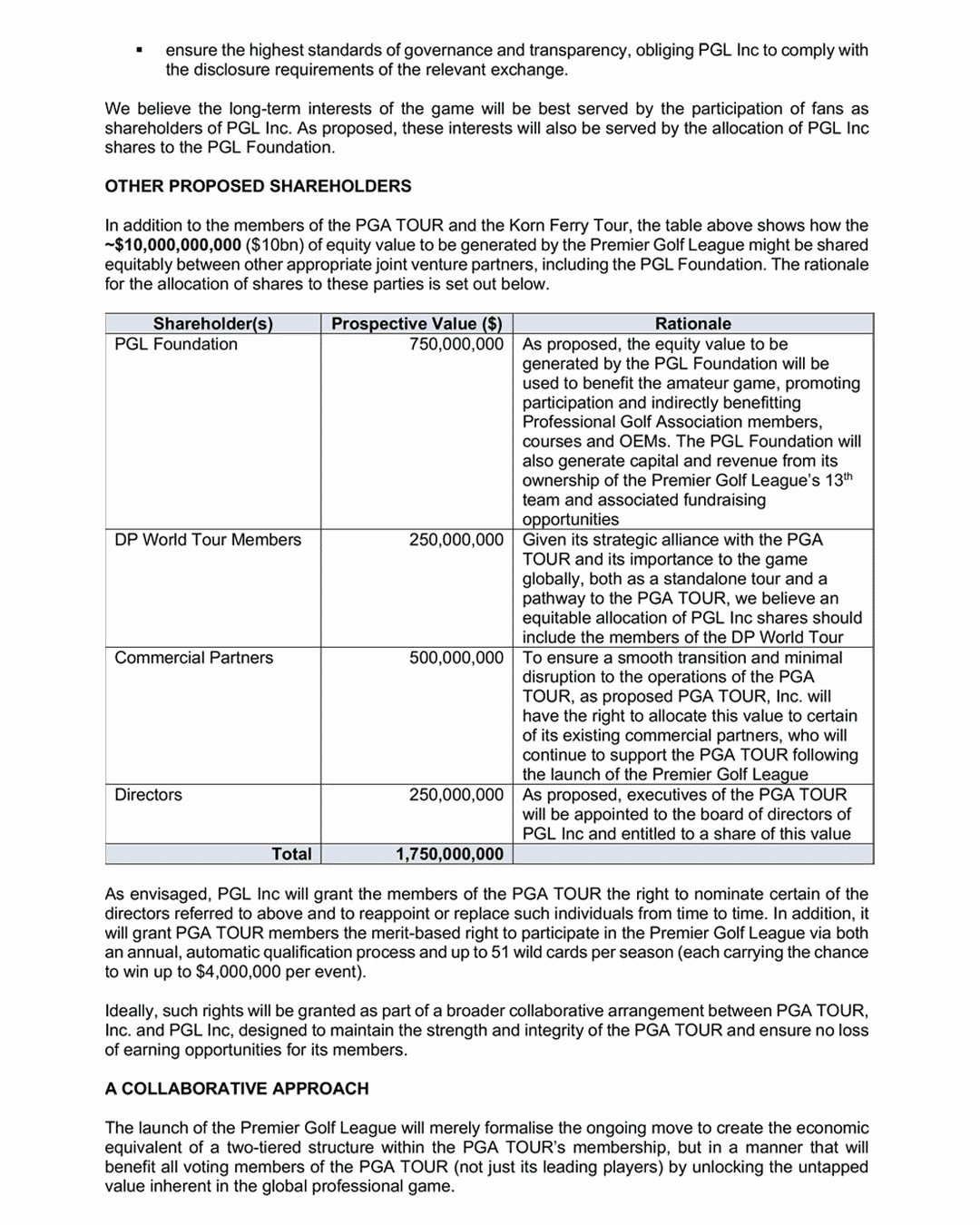 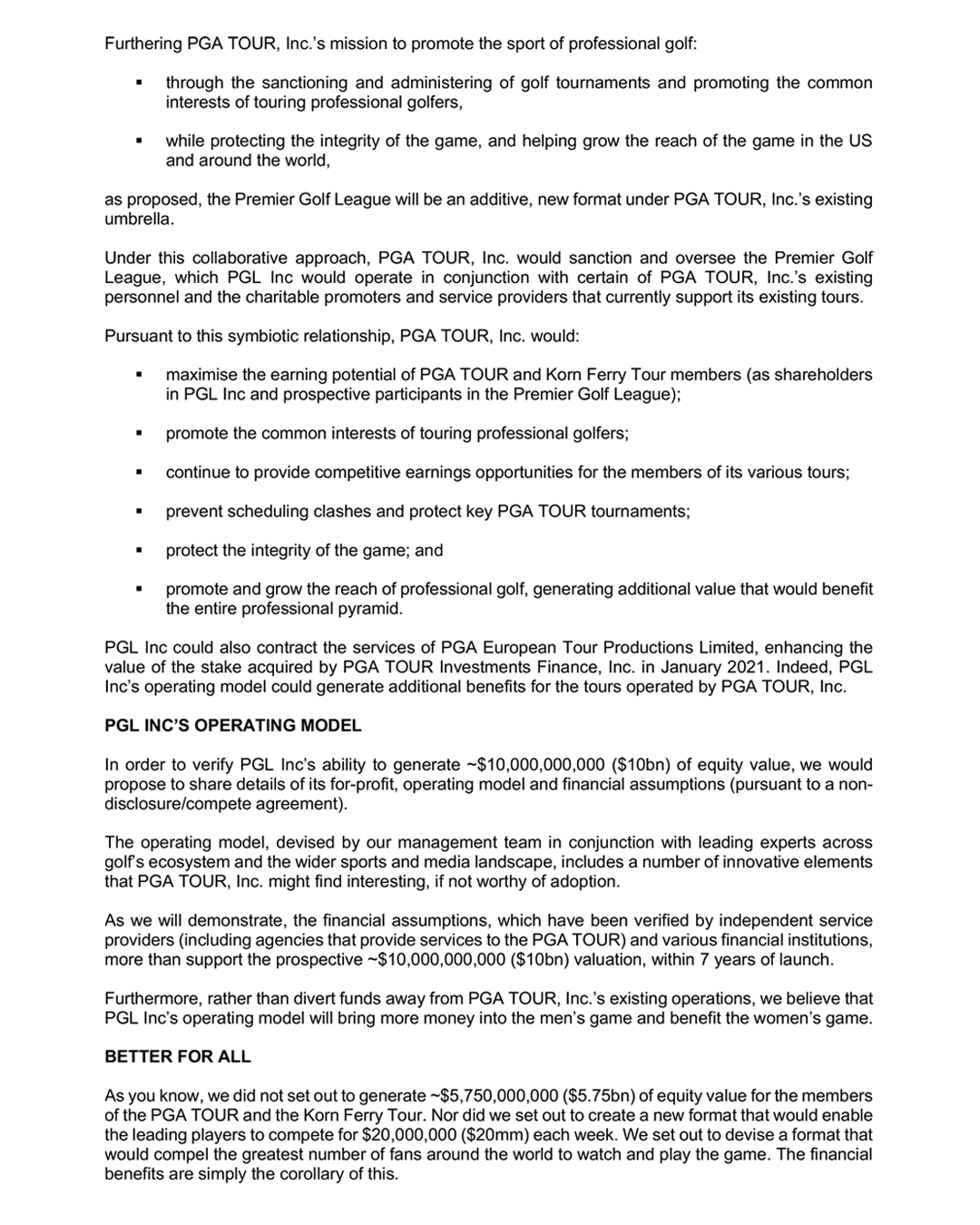 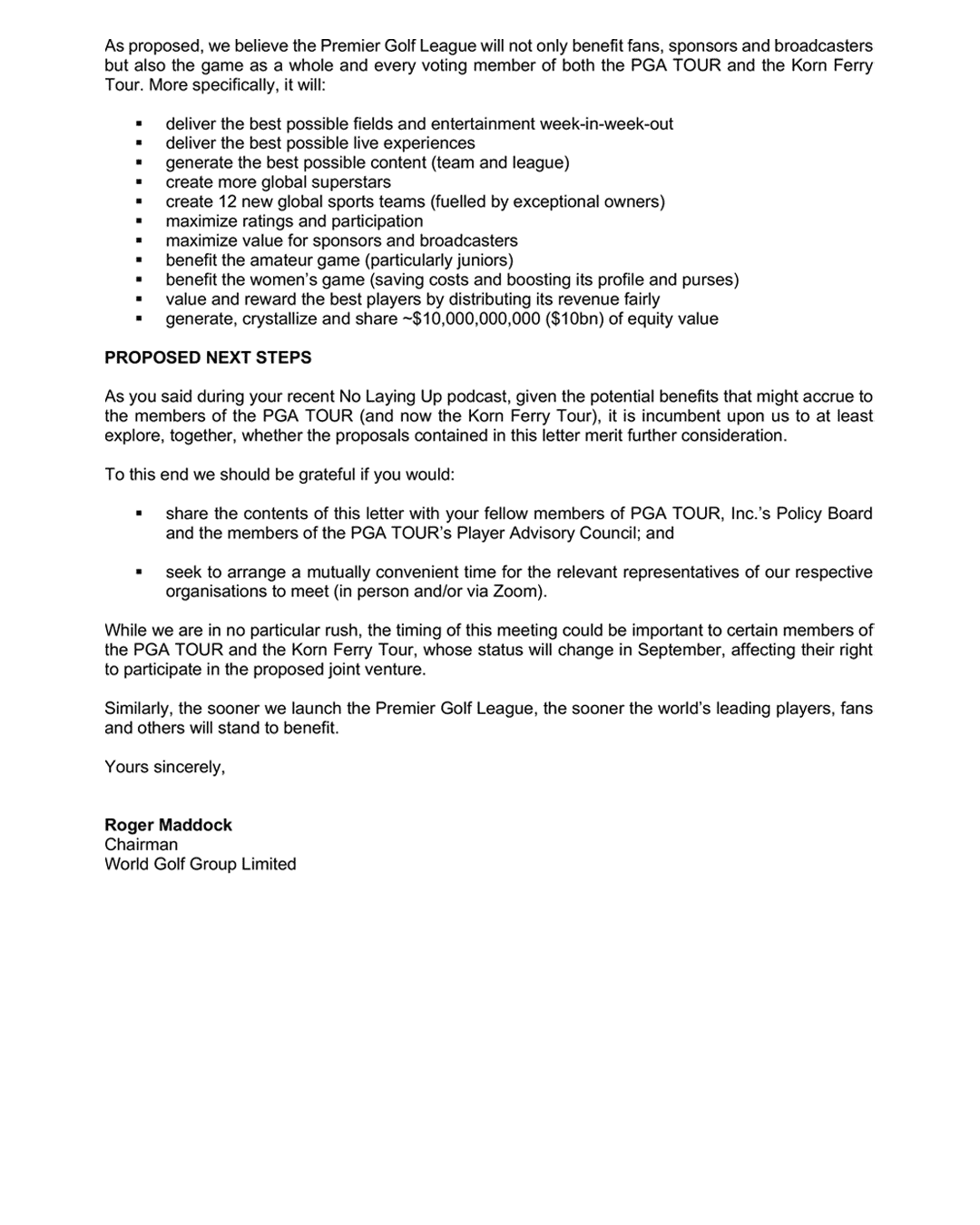