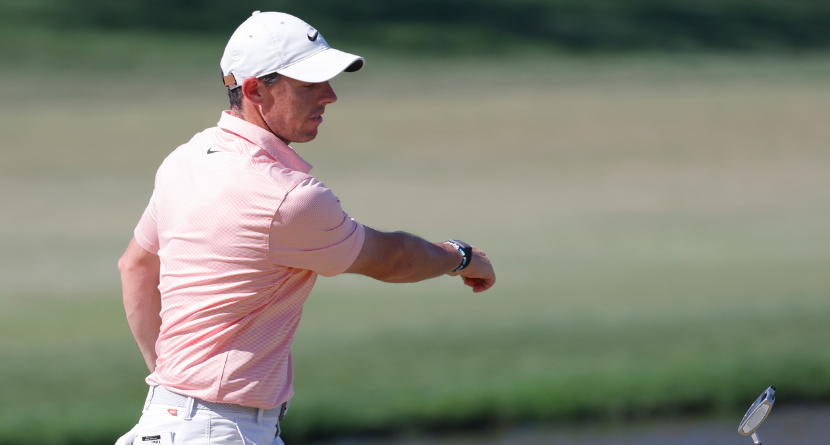 Rory McIlroy is making a habit of fading at Bay Hill.

Just take a look at the round-by-round regression that’s befallen the four-time major champ in each of his last three starts at the Arnold Palmer Invitational:

Coincidence? Bad luck? It’s hard to make the case that the track doesn’t fit his eye when he stripes it like he did on Thursday to seize the first-round lead.

McIlroy, who admitted to feeling “punch-drunk” at the conclusion of this past Sunday’s round, has his own theory for why he hasn’t been able to string four — or even two or three — solid rounds together. And it doesn’t reflect well on the legendary venue.

“The weekend, it’s like crazy golf,” McIlroy said. “You just don’t get rewarded for good shots. Like I’m venting here, and I’m frustrated and whatever. I think as well the frustration is, it’s a carbon copy of what’s happened the last three years here.”

There have been promising starts that have come undone on the weekend for McIlroy at other venues. And to his credit, he admitted that his post-round comments were at least partially a reflection of his frustration for the deja vu factor. His emotions came to a simmer on the 12th green, where he snapped a wedge before missing his par putt.

Does Rory have a point?

While some responses to McIlroy’s comments were, predictably, less than empathetic, the golf writer Geoff Shackelford appeared to come to the 32-year-old’s defense on Twitter. “I’m not sure how that set-up shows where a player is at,” Shackelford said in a reply to another user. “The winner hit five fairways and nine greens.”

Shackelford went on to refer to the tournament as a “scramblefest,” which is a good summation of champion Scottie Scheffler’s winning formula. Other players joined in the chorus of criticism for how the course was set up, specifically honing in on the overgrown rough and blazing-fast greens.

“This is as hard as I’ve seen in a long time,” said Gary Woodland, who frittered away his chance at a win with a double bogey on the par-3 17th hole. “Conditions were brutal. The golf course is hard enough, and then you throw out the firm greens and the wind and not much grass, ball is oscillating a little bit, it’s as tough maybe since [the 2020 U.S. Open at] Winged Foot, I would say. It was tough.”

“I don’t mind golf courses being penal when you miss, but it’s not rewarding good shots,” McIlroy said. He intimated that players are starting to avoid the punishing experience of Bay Hill and focusing instead on prepping for the Players Championship.

Added 2020 Arnold Palmer Invitational champ Tyrrell Hatton: “I think the greens get so quick sometimes, pin positions just seem brutal. … You have to play defensively and try your best to get the ball as close as you can.”